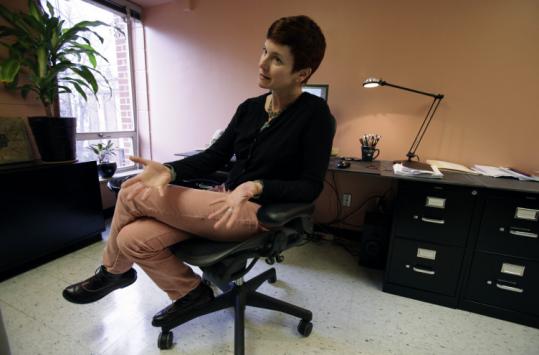 Karla McGregor, a professor at the University of Iowa, said sabbaticals are essential for the productivity of the faculty. (Charlie Neibergall/ Associated Press)
By Ryan J. Foley Associated Press / December 7, 2010

IOWA CITY — Under pressure to cut costs, state universities and lawmakers across the nation are going after one of the oldest traditions in the academic world: the professor’s cherished sabbatical.

Professors often use the paid breaks from teaching to write books, develop new courses, or collaborate with colleagues around the world. But the practice is increasingly being questioned by critics who say it offers little more than a paid vacation at a time when other public employees are being furloughed or laid off.

“Why should the taxpayers of Iowa be paying to basically give these folks a year off from teaching?’’ asked incoming House Speaker Kraig Paulsen, a Republican whose party won control of the chamber in November. “It’s as simple as that.’’

Some schools are reducing the number of sabbaticals awarded, angering faculty members who say their research and teaching will suffer.

The University of Iowa has cut its sabbaticals in half over the last two years. Paulsen and other GOP leaders have proposed canceling them all for a year.

At other schools, sabbaticals have been postponed or eliminated. Truman State University in Missouri abolished sabbaticals for the budget year that begins July 1 because of expected shortfalls, said Richard Coughlin, its provost.

In Louisiana, Governor Bobby Jindal, a Republican, slashed higher education budgets last month, including sabbaticals. He said cutting back on the leaves of absence might “force professors to actually spend more time in the classrooms teaching and interacting with students.’’

And in Wisconsin, the incoming Republican leader of a legislative committee overseeing higher education wants to know how much sabbaticals cost and whether they are being used for worthwhile projects or as vacations, aide Mike Mikalsen said.

“In this environment, everything is on the table,’’ she said.

Defenders of sabbaticals, which are typically awarded every five to seven years, say some of the criticism stems from a misunderstanding of professors’ jobs.

Professors, they say, are not just teachers but also scholars and public servants. Sabbaticals, they contend, are critical to advancing research, winning grants, publishing books, and keeping up with the latest developments in their fields. Then professors can bring that knowledge back to the classroom.

“There’s one word that explains why we’re a city of literature, and that’s sabbatical,’’ said Jeff Cox, University of Iowa history professor, referring to an award Iowa City received in 2008 from UNESCO, the educational and cultural arm of the United Nations.

Cox, who has used sabbaticals to write books on the history of religion, said humanities professors have been demoralized by the decision to cut the number of sabbaticals, a move he called political. He said he worried that younger professors would not be able to make a career out of both teaching and research like he has.

P. Barry Butler, interim provost, said the school responded to outside expectations to cut sabbaticals but defends them as critical to the institution’s mission.

The university plans to ask the Board of Regents on Thursday to approve 58 faculty leaves for the coming year, a slight increase after two years of sharp declines.

Defenders of sabbaticals object to Paulsen and others framing them as wasteful entitlements.

Professors at Iowa are eligible after 10 semesters of teaching, but they must come up with competitive proposals, which are then vetted by their colleagues. They also have to report on the results of their research.

Canceling sabbaticals saves money because schools do not have to hire temporary instructors to take over classes. But it also risks losing grant money and productivity.