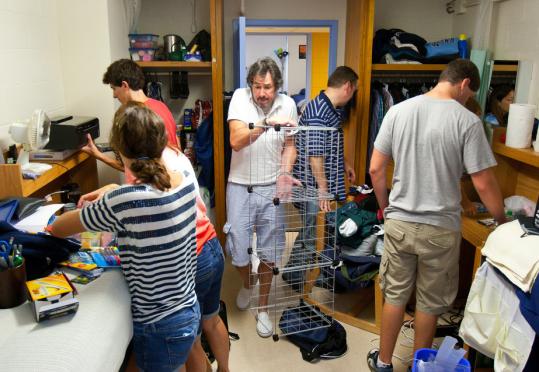 Some fussed over their offspring, helping them unpack and organizing the drawers in their new dorm rooms. Others sat back and watched their children bustle.

But whether they were hands on or not, nearly every parent was beaming with pride yesterday at two Boston-area colleges that began welcoming incoming freshmen, marking the start to an annual frenzied rite of passage: move-in season in America’s college town.

Brandeis University in Waltham and the Massachusetts Institute of Technology in Cambridge were among the first to welcome their freshman classes on their official move-in days yesterday.

“A month ago I gave him the lectures; we numbered them,’’ said Mayer Popack, who drove to Brandeis from West Orange, N.J., to move in his 19-year-old son Avi. “Do your work, no drugs, no drinking, laugh, laugh,’’ Mayer said playfully, helping his son stretch an extra-long sheet across his mattress.

Standing in the stuffy third-floor room in Shapiro Residence Hall as rain fell steadily outside, the elder Popack was at ease. This was his third college move, having performed the arduous task at Harvard and Yeshiva universities with his two other children in years past.

Mayer Popack said Brandeis was the easiest move, thanks to his son’s light packing and the staff of about 40 orientation leaders who gave curbside assistance to their new classmates. “My daughter filled up the van,’’ he said. “It took Avi five minutes.’’

One move-in at Brandeis was especially heartfelt. Rachel Feingold helped her daughter, Gabriella, 19, take up residence in the same building she lived in 26 years ago as a freshman, she said.

“I had some of the happiest days of my life here, and I talked it up with so much fondness that by 12, [Gabriella] wanted to go here,’’ she said.

In the center of Mansell Quadrangle, where about half of the incoming class is housed in four buildings nestled on a gentle slope, stands a willow tree, where the older Feingold said she used to play her guitar. “Gabriella said I have three chances to say ‘I remember when.’ ’’

Stephanie Schafer, 18, drove two days from Winter Park, Fla., to MIT with her father. She said she was not very happy about lugging her heavy minifridge from the car to her Baker House dorm, but is looking forward to the cultural and educational opportunities of the Boston area.

After traveling solo across the country to attend MIT, Isabella Tromba, 18, said she wasn’t fretting being far away from her home and twin sister.

As Tromba stood by the door of Next House on Memorial Drive, another student came through the lobby doors with her mother, each holding an end of a heavy red duffel bag. Tromba recognized the new arrival as her roommate, Hillary Mulholland, of Vero Beach, Fla. The two had contacted each other through Facebook after they were paired by the university.

“We have a few more trips,’’ said Sue Mulholland, Hillary’s mother, as the two lugged her belongings into the building.

However, the anticipated challenges were leaving her a bit uneasy. “I’m not necessarily looking forward to the workload,’’ she said.

This year, Brandeis accepted the largest number of international students it has ever admitted; they make up 16 percent of the class, said Andrew Gully, a spokesman for the university.

One of those students is Adrianne Wurzl, 17, who is Brazilian and Austrian. She said she had lived in the United States for years, but has not relinquished her European passport.

“I don’t know anyone, but I do know my roommate,’’ Wurzl said.

“The next four years of your life are going to be, in my view, the best of your life. They are going to be a real new beginning for all of you,’’ Reinharz said to students and their families, according to a statement released by the university. “You’re going to be able to debate the great questions that have been debated by every generation before you and new ones that my generation and your parents generation never even dreamed of.’’

Matt Byrne can be reached at mbyrne.globe@gmail.com; Sean Teehan at steehan@globe.com.

Send us your moving day photos!
Your comment is subject to the rules of our Posting Policy
This comment may appear on your public profile. Public Profile FAQ