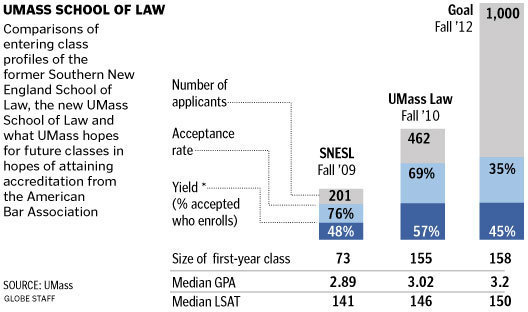 NORTH DARTMOUTH — Applications and enrollment at the state’s first public law school have surged since the University of Massachusetts Dartmouth acquired the struggling Southern New England School of Law, an early sign that the controversial merger is off to an auspicious start.

Following years of pitched political battles to block its formation, the new University of Massachusetts School of Law received 462 applicants for this fall’s incoming class. That is more than twice the number who applied last year, when the school was a little-known private institution.

The size of the first-year class is also doubling to 155. And students’ credentials, as measured by undergraduate grade point averages and LSAT scores, have risen, a feat for a school that has yet to be accredited by the American Bar Association, say university administrators. More than half of those accepted have decided to enroll.

“Students are voting their confidence in the fact that we can probably get the accreditation,’’ Jean MacCormack, chancellor of UMass Dartmouth, who plans to seek the designation in 2012.

Among the entering class: an MIT alumnus and son of Italian immigrants who is leaving the high-tech industry to pursue a law career to protect the rights of new immigrants; a victim-witness advocate in the Bristol district attorney’s office; and an occupational safety professional who wants to ensure that workplace health and safety standards are enforced.

The new students are a nontraditional group, ranging from 21 to 59 years old. More than a fifth will pursue law degrees part time while continuing to work. Half are Massachusetts residents. Nearly a third are black, Latino, Asian, or Native American, the highest minority enrollment among Mass. law schools.

And 39 percent will receive financial aid, including 25 students awarded a fellowship that covers half of the $23,565 tuition for committing to four years of practicing public service law upon graduation.

“The fellowship is a huge relief for someone in my position,’’ said Brandon Ferris, the 25-year-old victim-witness advocate. “As soon as this school became UMass, there was no question where I was going to go.’’

The public law school, whose tuition is about 40 percent less than what private law schools charge, formally assumed its new identity July 1. The school was decades in the making. Attempts to create it repeatedly faltered amid challenges from private law schools that said the state had enough law schools, questioned its financial feasibility, and were threatened by the more affordable competition.

Its existence, though, has not appeared to affect UMass Law’s primary rivals, including Suffolk, New England, and Western New England law schools. Suffolk saw a 2.5 percent increase in its applications for next year, with first-year enrollment holding steady at 530 students.

Some legislators also opposed the move. Fearing it would end up costing the state more money, they wrangled over statutory language to make it difficult for the public law school to operate even after the state’s Board of Higher Education approved Southern New England School of Law’s donation of its campus and assets to the state in February.

Now, signs of change are beginning to spring up all over campus, tucked in the state’s southeast corner. A temporary plastic sign touting the school’s new name greets passing cars at the entrance. Framed newspaper clippings about the historic transition grace a lobby wall. Students who have arrived early sport navy-and-gold sweatshirts emblazoned with UMass Law.

“Everything is underway now to make it visibly UMass,’’ MacCormack said.

Twenty first-year students are already on campus, getting a jump on law school with a criminal justice course taught by law school dean Robert Ward. In nine weeks over the summer, they will cover a range of topics from Fourth Amendment searches and seizures, to conspiracy and inchoate crimes.

Three weeks ago, Ward said, he worried whether some of his students belonged in law school. But he said he has found that the students have fewer academic challenges and possess better writing and analytic skills than students in previous years’ classes.

“It’s important to get them when they start law school, rather than later on when they have difficulties,’’ Ward said.

On a recent evening, Ward began class with some exciting news: The law school is establishing a relationship with the Mashpee Wampanoag tribal court. A tribal council leader who had graduated from UMass Dartmouth read about the new law school in an alumni magazine and thought Ward’s students could help pursue civil actions in tribal court.

Other supporters have stepped up as well to help build the law school’s future, which MacCormack has vowed would not cost taxpayers a cent. Charles Hoff, a venture capitalist, former UMass trustee, and UMass Lowell graduate, has pledged $210,000 in scholarships for needy graduates of any UMass campus to attend the law school.

The new students said having a state law school makes a legal education more accessible. With the lower tuition, and fellowships for public service and high LSAT scores, some students believe they will graduate with little to no debt.

Danielle Allard, a 21-year-old from Williamstown who hopes to practice immigration or environmental law, said she considered applying to the law school only after it became public and picked it because it was the most affordable.

Several first-year students interviewed said they had been waitlisted or rejected from Suffolk and New England law schools in Boston, but they nevertheless prefer UMass because its location allows them to continue working full time.

Second- and third-year law students were invited to transfer into the new public school if they were in good academic standing. A handful were not eligible, MacCormack said. Nearly all of the 168 students eligible to remain opted to stay; three transferred elsewhere.

Faculty, too, had to reapply for their jobs and were reviewed by a panel that included law professors from Boston College and the University of Connecticut. All 13 were allowed to stay, but one did not receive tenure, MacCormack said.

The school plans to expand its faculty, and hopes to hire three more professors by fall 2011.

MacCormack believes that the school’s focus on public-service law will fill an important need for the state.

“These students are going to go out there, I hope, imbued with the spirit that they have an opportunity to improve justice because they got an education with an emphasis on the public purpose of law,’’ she said.