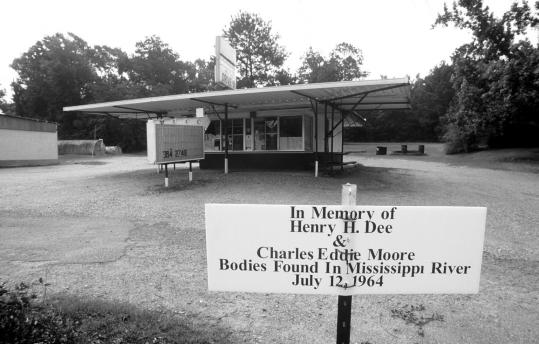 A sign in front of an ice cream stand in Meadville, Miss., marked the spot near where 19-year-olds Henry Hezekiah Dee and Charles Eddie Moore were abducted in 1964. They were killed, and their bodies were found months later in the Mississippi River. (David Ridgen via Associated Press)
By Jonathan Saltzman Globe Staff / June 23, 2010

On May 2, 1964, two black teenagers disappeared while hitchhiking in Franklin County in southwestern Mississippi, a hotbed of racial violence during the civil rights era.

The decomposed bodies of Henry Hezekiah Dee and Charles Eddie Moore, who had been beaten and weighted down, surfaced two months later in the Mississippi River. But it took more than 40 years for anyone to be prosecuted for their slayings. In June 2007, a reputed Ku Klux Klansman, James Ford Seale, was tried and convicted of kidnapping and conspiracy in the deaths.

This week, a Northeastern University School of Law professor helped relatives of Dee and Moore achieve another milestone in their quest for justice. The relatives — represented by Margaret A. Burnham, head of the school’s Civil Rights and Restorative Justice Project — settled a federal lawsuit that had accused Franklin County law enforcement officials of assisting Klansmen in the kidnapping, torture, and murder of the two 19-year-olds.

Neither the plaintiffs nor the county would disclose the terms of the settlement because of a confidentiality agreement. But Thomas Moore, the 66-year-old brother of Charles Moore, said he was satisfied that Franklin County has been held accountable and credited Burnham and her law students.

“This has been a long journey, 46 years,’’ he said in a telephone interview from Colorado Springs, Colo. “After we got the verdict in the Seale case, you’d think that was it. But that was just part of the mission. Had it not been for Margaret, Franklin County would still be in denial.’’

Burnham and about 15 law students spent roughly 2 1/2 years on the case, combing through thousands of pages of old FBI files and police reports, interviewing dozens of witnesses in Mississippi, and researching the history of racial bias by law enforcement in the county.

She said the evidence her legal team gathered confirmed an open secret in the county: The slayings “could not have taken place but with the collaboration, or passive cooperation, of local law enforcement.’’

The Franklin County Board of Supervisors unanimously approved the out-of-court settlement Monday, passing a resolution that said the county was “not in a financial position to continue litigation.’’ Nonetheless, the resolution said the county denied contributing to the slayings and “in no way condones the horrific deaths.’’

“These deaths are believed to have resulted solely from the criminal actions of the Ku Klux Klan,’’ the resolution said.

The killings of Dee and Moore are among about two dozen cold cases from the civil rights era that state and federal prosecutors across the South have brought to trial since the early 1990s. But they have received less attention than other rekindled cases, much as the disappearance of Dee and Moore was overshadowed by other racially motivated slayings.

Dee and Moore were kidnapped by Seale and other Klansmen on US Highway 84 near Meadville, the county seat, according to the lawsuit. The Klansmen targeted the two because Dee had recently visited Chicago and wore a bandanna on his head, prompting the kidnappers to accuse him of being among a group of black militants the Klan contended were bringing guns into the county.

The kidnappers took Dee and Moore to Homochitto National Forest, the suit said. Klansmen beat them with bean poles and tree limbs for about 30 minutes while demanding where the purported guns were. Finally, one of the kidnapping victims falsely stated that the guns were hidden at the Roxie First Baptist Church, the suit said.

That is when county officials came into the picture, according to the suit. Several Klansmen drove to the Sheriff’s Department and asked Sheriff Wayne Hutto, a fellow Klan member, and a deputy sheriff to search the church with them, without a warrant. They found no guns.

After the search came up empty-handed, Seale and other Klansmen drove Dee and Moore, who had been bound and placed in a car trunk with their mouths taped, across state lines to Louisiana, the suit said. They tied Dee to an engine block, took him by boat into the Mississippi River, and dumped him overboard to drown. They strapped Moore to a railroad tie and iron weights and dumped him overboard, too.

Parts of their bodies surfaced in mid-July. At the time, however, the case was overshadowed by the massive search for Michael Schwerner, James Chaney, and Andrew Goodman, the civil-rights workers who disappeared from Neshoba County in June 1964 in what became known as the “Mississippi Burning’’ case.

In November that year, Seale and one of the other Klansmen kidnappers, Charles Edwards, were arrested and charged under state law with murder in the deaths of Moore and Dee. But the Franklin County district attorney persuaded the court to drop the charges several weeks later. But at no time did the sheriff disclose his contact with the Klansmen that night, even when he was interviewed by the FBI at the time, the suit said.

It remained a secret until Seale was tried in US District Court in Jackson in 2007, after Thomas Moore and a Canadian Broadcasting Corporation documentary maker uncovered evidence about the killings and contacted federal prosecutors. At the trial, Edwards testified under immunity about what happened that day, including the Klan’s search of the church with the sheriff and deputy.

“We allege that the sheriff could have prevented the deaths had he inquired of the Klansmen, ‘Where did you get this information about the guns?’ ’’ Burnham said, adding that Moore and Dee were still alive at the time.

Seale was convicted and sentenced to the maximum of three life sentences. The sheriff and deputy are both deceased.

A former student who worked on the case said it changed her life. Janeen Blake, who graduated from the school a year ago, sat in on the deposition at which lawyers questioned Charles Edwards and he repeatedly invoked his Fifth Amendment right against self-incrimination.

Blake, 27, who grew up in suburban New Jersey and is black, had heard stories about the civil rights era, but seeing a former Klansman up close “shook me up.’’

Now that the case is settled, Thomas Moore said he plans to visit the tombstones of his brother and Dee in Franklin County in a few months.

“I’m going to stand in front of the graves,’’ he said, “and say, ‘Brothers, I did all I could do, with the help of Margaret Burnham. We held the county accountable for what they did to you 46 years ago.’ ’’