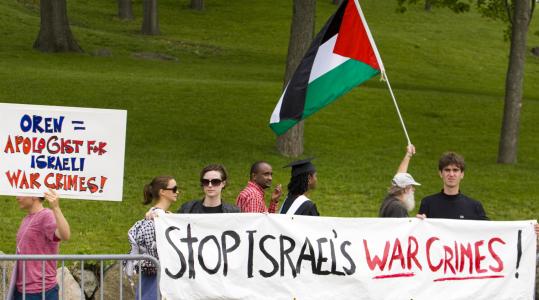 Outside Brandeis University’s commencement ceremony yesterday, about 20 students protested the college’s choice for its keynote speaker, Michael Oren, the Israeli ambassador to the United States.

The selection of Oren, who critics say is a polarizing figure due to his role in defending controversial Israeli policies occupied territory, such as the building of settlements in Jerusalem and the invasion of Gaza in 2008-09, sparked controversy when the school announced its choice last month.

It was not the first time a speaker with ties to turbulence in the Middle East has angered students. In 2007, there was intense debate on campus over whether to host President Carter following the release of a book that was critical of Israel’s policies toward the Palestinians. Last November, some students objected to a campus appearance by Richard Goldstone, who oversaw a United Nations report that accused Israel of war crimes.

“Oren’s far-right positions reflect only a small part of the opinion of the Jewish community, and his selection privileges that part as the embodiment of the Jewish people,’’ said a letter signed by 140 Brandeis students. “This marginalizes the significant (and growing) segment of the Jewish population that does not agree with him on these issues, as well as the larger Brandeis community that feels similarly.’’

Outside the commencement ceremony yesterday afternoon, students showed mixed feelings about the controversy.

“I think some people started protesting before they knew what [Oren] had to say,’’ said Jacqueline Rothschild, who graduated with a bachelor’s degree in psychology. “. . . It was a little annoying and took away from the graduation. I fully supported the decision by Brandeis.’’

Other students said they were proud of the protesters. “I congratulated them because they had a focus on human rights,’’ said Bimal Gadal, who earned a master’s degree in international development. “This school is about social justice, and they got attention to their issues. I thought it was the right thing to do.’’

Correction: Because of a reporting error, an earlier version of this story mischaracterized the group of about 20 people protesting Brandeis University's choice of Michael Oren, the Israeli ambassador to the United States, as commencement speaker. Many non-students were among the protesters.

Editor’s note: This story was written by a part-time correspondent who failed to disclose that he had previously editorialized in personal Internet posts against Israeli policy toward Palestinians. Globe editors learned of those posts while conducting an internal review of the Brandeis coverage. The correspondent’s failure to disclose a conflict violated Globe policy, and he should not have been assigned to cover the event. The story failed to include coverage of the substance of the remarks made by Michael Oren, Israel’s ambassador to the United States, and made no mention of an electronic petition supporting his appearance.