Longtime professor has called for code of behavior 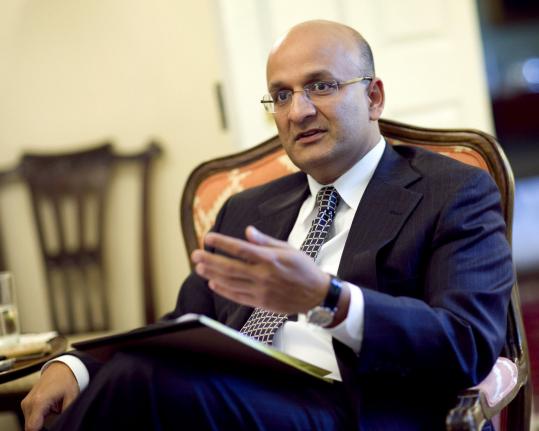 A professor who has a strong interest in business ethics will become the new dean of Harvard Business School, at a time when the corporate world’s image has been pummeled by fallout from the 2008 collapse of financial markets and ongoing allegations of corruption and greed.

Nohria, 48, the Richard P. Chapman Professor of Business Administration, will become the business school’s 10th dean. He will succeed Jay Light, who in December announced his plans to retire at the end of June after five years at the helm.

During a conference call with reporters yesterday afternoon, Nohria acknowledged that “society’s trust in business has taken a hit’’ in recent years and he vowed to “restore the trust that has been lost.’’

In his more than two decades on the school’s faculty, Nohria has been particularly active in business ethics, frequently writing and speaking on the need for changes in business and leadership training. A 2008 article written by Nohria and fellow faculty member Rakesh Khurana for the Harvard Business Review said “managers have lost legitimacy over the past decade in the face of a widespread institutional breakdown of trust and self-policing in business.’’ The two called for a “rigorous code of ethics’’ for business leaders, similar to the medical profession’s Hippocratic Oath.

Last year, students at the business school, partly inspired by the article, started an “MBA oath’’ movement, which asked business students to take a voluntary pledge to “create value responsibly and ethically.’’ Since that time more than 2,500 MBA students and graduates representing about 250 institutions have signed the oath.

During yesterday’s conference call, Faust said she spent months talking to business leaders, Harvard professors, and students before making her decision to offer Nohria the position. She said the process was particularly intensive because “the future of business and business education are under tremendous scrutiny.’’

Nohria received a bachelor of technology degree in chemical engineering in 1984 from the Indian Institute of Technology, Bombay, which awarded him its distinguished alumnus medal in 2007.

He received his PhD in management in 1988 from MIT’s Sloan School of Management.

He has also co-written or co-edited 16 books, including “Handbook of Leadership Theory and Practice,’’ his latest.

The graduate school, which is consistently ranked among the best in the world, has trained a number of business leaders who were involved in the financial upheaval of the past few years, including Jamie Dimon, chief executive of & Co., and Henry Paulson, former US Treasury secretary and former head of Group, which is now contending with a fraud lawsuit by federal regulators over its investment practices.

Founded in 1908 as part of Harvard University, Harvard Business School has more than 200 faculty members, and offers full-time programs leading to a master’s of business administration and doctoral degrees, as well as more than 140 open enrollment and executive education programs.

Nohria, who was born in Mumbai, India, and is a naturalized US citizen, will start his new job on July 1.

Received bachelor of technology degree in chemical engineering in 1984 from the Indian Institute of Technology, Bombay
Received PhD in management in 1988 from the Sloan School of Management at MIT Joined Harvard Business School faculty in 1988
Became Richard P. Chapman Professor of Business Administration in 1999
Teaches courses in MBA, PhD, and Executive Education programs
Has coauthored or co-edited 16 books, including “Handbook of Leadership Theory and Practice,” his most recent
Your comment is subject to the rules of our Posting Policy
This comment may appear on your public profile. Public Profile FAQ