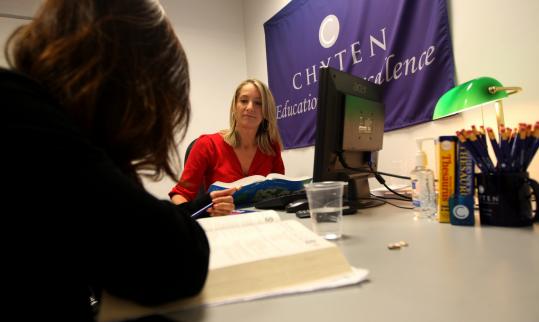 Emily Snodgrass tutors students at Chyten Educational Services in Lexington. The tutoring business is thriving in a tough economic setting, and Chyten has over two dozen locations, including in Pittsburgh and Lake Oswego, Ore. (Photos By Joanne Rathe/Globe Staff)
By Jeannie Nuss Globe Correspondent / January 29, 2010

Despite a poor economy that has led other businesses to scale back, a Lexington-based educational company has opened seven tutoring franchises in the past 45 days, and it plans to double in size this year.

Chyten Educational Services, which has 27 tutoring centers, will announce its expansion plans today.

The company has grown in spite of the recession, in part because of an growing number of students taking college entrance exams - nationally, a record 1.53 million students in the class of 2009 took the SAT, according to the College Board - and the appeal of franchises for the increasing number of unemployed workers.

“I think there’s a great opportunity for people who want to start their own business, who maybe lost their jobs because their companies were downsized,’’ said the company’s chief executive, Neil Chyten.

Chyten Educational Services, which began as an extension of Chyten’s long history as a private tutor, has grown from one educational center, founded in 1999 in Newton, to more than two dozen centers in 10 states, including locations in Pittsburgh and Lake Oswego, Ore.

Even as the US unemployment rate hovers near 10 percent, some say Chyten’s expansion plans offer hope for entrepreneurs.

Chyten has partnered with Ultra Franchising - it’s the franchising arm of Minuteman Press - as its national sales agent. Nick Gimpel, vice president of the New York company, attributes Chyten’s growth, in part, to increased competition among college students fighting for spots at universities, the economic downturn, which has left people scrambling for jobs and learning new trades, and cutbacks in education that have created a market for more tutors.

“Tutoring has become a much more mainstream business than ever before,’’ Gimpel said.

Several Chyten owners have said the tutoring franchise business is lucrative. Neil Bernstein, director and owner of Chyten Tutors and Test Preparation in Beverly, opened his center in January 2008. He said the number of sessions doubled in 2009, from about 50 per month in the first half of the year to more than 100 a month in the latter half.

“I’ve told the candidates, if you have enough money to get going . . . you will grow a very successful business.’’

Parents can spend anywhere from $800 on group classes to about $3,500 for private sessions with a more advanced tutor, Chyten said. Parents like Sandra DaDalt, a Wellesley lawyer who sends her 16-year-old daughter to Chyten for SAT preparation in history and writing, said the money is well spent.

“I’d rather send her here than go on a vacation,’’ DaDalt said.

Jeannie Nuss can be reached at jenuss@globe.com.

Correction: Because of a editing error, a caption for this story misstated the location of the tutoring session that was photographed. It was in Lexington.