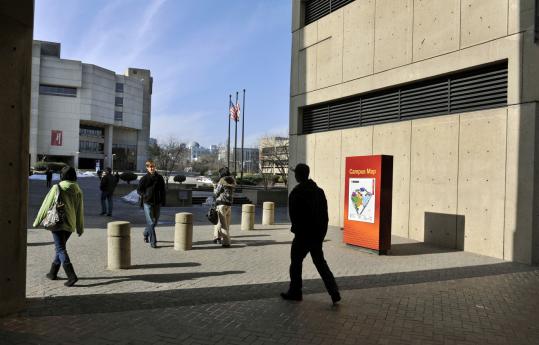 The University of the District of Columbia?s law school aims to offer low-cost law degrees. to underserved populations. (CHRIS USHER FOR THE BOSTON GLOBE)
By Tracy Jan Globe Staff / January 29, 2010

WASHINGTON - Critics say it cannot be done. A lackluster law school plagued by dismal bar exam passing rates will not be able to attract students good enough to help it gain national accreditation. Add to that a commitment to educate the underprivileged, often students with less than stellar academic records, and it becomes mission impossible.

But as the University of Massachusetts contemplates undertaking this very challenge, a public law school in Washington, D.C., provides the state with a blueprint for how a school in dire straits can, with years of careful attention, vastly improve its quality while maintaining its focus on the underserved.

The city of Washington launched its public law school in 1988 with a lofty goal: to provide a legal education to minorities underrepresented in the field and empower them to serve their own communities and others in need.

But for years, less than a quarter of its graduates were able to pass the bar exam on their first try, a miserable rate that repeatedly thwarted its chances of gaining national accreditation. With the school on the brink of closing little more than a decade ago, officials at the University of the District of Columbia’s law school made a heart-wrenching decision.

They initiated a rescue plan that included cutting in half the number of students they admitted and, for the first time, establishing a minimum LSAT score and grade-point average for admission, despite fears that it would deter many low-income and minority applicants.

“It was torture,’’ Katherine S. Broderick, dean of the 300-student law school, said of the decision. “Raising academic standards can be a very difficult and jarring process because you fear it will change your institution in negative ways.’’

The experience of the city’s only public law school, a tiny start-up housed in adjoining concrete buildings in D.C.’s upper northwest pocket, illustrates the struggle to balance accessibility with the requirements of accreditation.

And its tumultuous journey offers hope and some valuable lessons for Massachusetts, where higher education officials are poised to approve a controversial plan to turn a little-known, poorly regarded law school in Southeastern Massachusetts into the state’s first public law school. The Board of Higher Education, which rejected a similar plan four years ago, is set to cast its vote Tuesday.

UMass, like UDC’s David A. Clarke School of Law, plans to offer a low-cost law degree to underserved populations in a state filled with elite private law schools and increase the number of public interest attorneys.

Southern New England School of Law, which has offered to donate its campus and assets to the state, has also been plagued by a low passing rate for the bar exam, a three-year average of 43 percent for first-time test takers, and is not accredited by the American Bar Association.

At one time, that number was just 6 percent. With limited financial means, the 235-student school cannot offer the academic support its students need.

Massachusetts officials hope the UMass story unfolds like UDC’s. The American Bar Association granted the UDC law school full accreditation in 2005, a full decade after the once-private law school merged with the public university system. “It was a long slog,’’ Broderick said.

The journey began in 1986 when the financially struggling Antioch University, based in Ohio, closed its D.C. law school along with dozens of affiliates around the country. City councilors, impressed by the private law school’s commitment to diversity and service to the city’s underclass, opened the District of Columbia School of Law in 1988 as a stand-alone law school.

To attract students, the school promoted its public service mission and set itself apart as one of the only law schools requiring students to work in the school’s legal clinics for the poor. It also cut tuition to $2,500 a year and raised money for scholarships because, without accreditation, students could not apply for federal financial aid.

The school hit a major hurdle in 1994 when the city went bankrupt and cut the school’s $4.5 million budget in half. To save money, the law school merged with the city university system and moved onto the campus in 1995. The school’s doubtful future prompted a student exodus, with half of its most promising students transferring. Already borderline passing rates for the bar exam plummeted, to 14 percent in the late 1990s.

Through it all, the school’s admissions team focused on recruiting students with a passion for public service, even without stellar grades and test scores, and placed a premium on assembling a diverse class. The application asks students to write about a case of injustice they witnessed or experienced, what they did about it, and how would they respond today.

“We admitted a couple of classes where we went too far in our risk-taking,’’ said William L. Robinson, the public law school’s founding dean, who continues to teach here.

“Because we have a public mission, we have a responsibility to do that risk-taking. But it’s a matter of judgment. How low can you go? How many do you take? And we went too low.’’

It was then, in 1999, that, the law school under Broderick’s leadership decided to impose a cut-off on grades and LSAT scores and cut back on the incoming class from more than 100 to just 40.

The school planned to require an LSAT score of 146 out of 180, but when a statistical analysis showed that would reduce diversity, officials dropped the limit to 144, as long as students had an undergraduate GPA of 2.6.

The school also beefed up academic support for its most vulnerable students. Entering students were offered a special program the summer before their first year, and those who earned less than a 2.3 GPA during the first year were required to take a course in legal reasoning. The school also offered more financial aid to enable students to work fewer hours or not at all and raised money for students to take a supplementary bar preparation course.

As a result, graduates’ bar passing rates slowly climbed over the course of a decade, inching up by about 10 percentage points each year from the 14 percent low to a high of 83 percent in 2008.

“You can indeed achieve respectable numbers,’’ Robinson said. “But with an access mission, the founding fathers at UMass should expect that this is going to be an ongoing issue. They’re going to struggle to keep their bar passage at respectable levels.’’

Despite facing the similar challenge of raising student quality, several faculty and long-time UDC administrators predict that UMass will have a shorter path to national accreditation. Unlike DC’s law school, Southern New England is already regionally and state accredited, which means its students are eligible to take the bar in Massachusetts and Connecticut.

“I do believe that UDC law school is a beacon of where UMass could be three to five years from now, a school with full ABA accreditation fulfilling the goals of its public service mission,’’ said John Brittain, a UDC law professor who also served as an external reviewer of the UMass proposal.

A hallway lined with graduation portraits shows that little has changed in terms of students’ racial and ethnic makeup in the last two decades. About half the students in each class were African-American, Hispanic or Asian.

And although the school does not require it, 17 percent of UDC students enter public service law upon graduation, compared to the national average of 5 percent.

“The fact that this university is engaged in legal activity to help people who wouldn’t be served otherwise is a huge political benefit,’’ said Allen Sessoms, president of the University System of the District of Columbia, who served as an executive vice president in the UMass system in the early 1990s.

“They were able to take a law school that nobody wanted and turn it into a gem.’’

1972: Antioch School of Law created with a public service mission

1988: District of Columbia School of Law opened as district’s only stand-alone public law school, enrolling 54 students in its first class.

1995: The public law school merged with the University of the District of Columbia, moved onto its campus, and had to start accreditation process all over again.