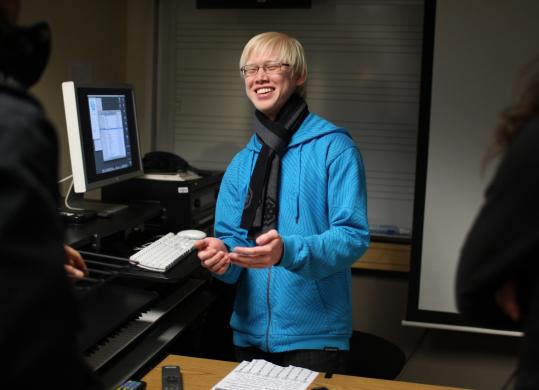 “Abandon,’’ a video game designed by a group of MIT students and set in a mysterious, surrealistic world of traffic cones, toasters, bookcases, and other vaguely menacing objects, may never make it to game stores or home consoles. But it will have at least one feature found on most commercially marketed video games: an original soundtrack, professionally composed and painstakingly synched to the game’s play features and story line.

At least that’s the goal of a recent Berklee College of Music class whose subject - composing music for video games - is growing in popularity by leaps, bounds, and beeps. Video games pull in $20 billion a year, roughly the combined revenues of the film and music industries. Berklee, one of a handful of schools prepping students for a field that barely existed 10 years ago, is eager to tap that booming market, one that’s making boldfaced names out of its most talented and prolific composers.

“The push to teach game audio really came from the students here,’’ says Michael Sweet, a Berklee associate professor whose professional background includes writing music and sound design for nearly 100 video games. A 1990 Berklee graduate and avid gamer who joined the faculty 18 months ago, Sweet lists one of his goals as “build[ing] the John Williams for video games in the next generations.’’ His classes fall under the purview of the school’s Film Scoring Department, whose chairman, Dan Carlin, has strongly supported the initiative. Another key proponent has been assistant vice president for curriculum Jeanine Cowen, who four years ago taught the first Berklee course focused exclusively on game audio.

Back when he was a student, notes Sweet, video games were popular but hardly a career anyone at Berklee thought much about. “Now, it’s a juggernaut,’’ he says. “The quality of the artwork and production values [are] dramatically higher, and so is the orchestral work.’’

Berklee is offering five classes this semester in video game audio or game scoring. Sweet says his typical student is not only knowledgeable about state-of-the-art video games like Modern Warfare and BioShock but also has classroom experience in disciplines like sound production, voice acting, music technology, and film scoring.

Versatility and familiarity are important. In writing for games, composers must anticipate and create cues for the various layers and levels a player passes through. Story lines and scenes change rapidly and unpredictably. As technology improves and memory space expands, moreover, these games have grown more sophisticated, visually and sonically. Players’ expectations rise accordingly, creating a demand for such elements as a full orchestral score.

Besides offering classes and a summer program in Music for Video Games, Berklee boasts a large and active Video Game Music Club, which holds weekly meetings and claims more than 300 members; sponsors an annual Video Game Orchestra concert of original game music; and hosts panels led by leading game professionals, some of them Berklee alums. One recent topic of discussion among club members has been an upcoming San Francisco conference, where prospective game professionals can take workshops and network with industry reps. Several club members plan to attend, while even more are considering a career niche that promises to be both creative and lucrative. Composing for video games can command fees ranging from a few hundred dollars per minute of music to a couple of thousand.

Berklee grads who’ve already made their mark in the industry include Norihiko Hibino (Metal Gear Solid, Zone of the Enders) and Olivier Deriviere (Obscure, Alone in the Dark), and Shota Nakama, creator and director of the Video Game Orchestra.

Club president Nazer Lagrimas, 22, a film scoring major from San Diego, is aiming toward a career in interactive audio. “To me, the fun of video game music is that it’s not linear, like a movie [score] is,’’ Lagrimas says. “There are no real rules or conventions.’’

Berklee senior Sean Hathaway, 23, of Idaho, has already written music for TV and film. He regards game scoring as his most promising career opportunity, though, given the money and prestige it potentially offers.

“It’s a great alternative for young composers who aren’t interested in the extremely crunched deadlines that come with television and film scoring jobs,’’ Hathaway says. Dialogue and sound effects often drown out the music onscreen, he adds. Whereas the TV or movie experience is over in a couple of hours, video games involve dozens of hours of play, sometimes more. “There’s more recognition of the music itself,’’ Hathaway says.

Berklee is not the only school building interactive game audio into its curriculum. Yale Music School, New York University, and the New England Conservatory have also developed classes and programs in the artform, according to Paul Lipson, president of the Game Audio Network Guild, an organization that provides information and resources for professionals in the field. Still, Lipson, an NEC grad, places Berklee in the forefront of the movement. “Major music schools and universities are taking this field very seriously, and Berklee has really been leading the way,’’ he says.

The guild has strived to build close ties to the school, he adds, in order to maintain a high degree of professionalism. Music schools like Berklee “are kind of locked behind the cloistered walls of academe,’’ Lipson says. “They need advice on the latest trends, so we’ll bring people in to talk with students and faculty.’’

Berklee has forged additional working relationships with the Singapore-MIT GAMBIT Game Lab, a hotbed of young game designers, and with the University of Southern California’s School of Cinematic Arts, Interactive Media Division. While MIT has plenty of capable game designers, “There aren’t as many great musicians around as Berklee has,’’ notes GAMBIT audio director Abe Stein, who commissioned the class work on Abandon. Sweet’s students had to sign a licensing agreement granting MIT rights to their music, providing the game isn’t later sold or licensed for a fee.

They also heard somewhat contradictory messages about approaching Abandon as composers. MIT game designer Matthew Weise urged students to “go as crazy as you want.’’ Sweet put the emphasis on the fundamentals, though. What actions, he asked the class, might trigger a change in tempo? Where might musical flourishes be inserted? Cross-faded or layered? Should the music be cued by the characters encountered in the game or by the achievements realized by the player?

What it boils down to, he said, jotting all their options on a whiteboard, “is how much stuff can you put in the soup?’’