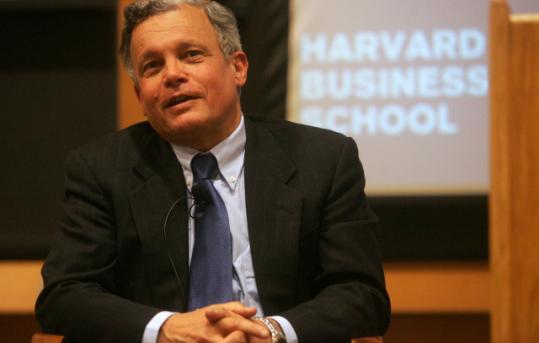 Harvard Business School Dean Jay O. Light will retire in June after nearly five years leading one of the world’s most prestigious institutions for management education, and 40 years on its faculty.

Light, 68, began teaching at the business school in 1969 and was named dean in 2006, after serving as acting dean following Kim Clark’s departure. Clark left in 2005 to become president of Brigham Young University-Idaho.

During his tenure, Light oversaw a capital campaign that raised about $600 million for student financial aid, technology, building projects, and global research centers. He launched initiatives including a research center in India in 2006 and the establishment of one in Shanghai, due to open next year. He also completed renovation and restoration of Baker Library, with its world-renowned collection of business books and archival material.

Light called the past year the most challenging of his tenure, as the business school and Harvard University struggled with fallout from the nation’s financial crisis and economic recession. He cut costs, in part by laying off 16 employees earlier this year. About 275 workers were laid off across the university as plunging financial markets sliced Harvard’s endowment and the broader downturn affected other revenues, such as those from publishing operations.

“We are safely on the other side of this Great Recession,’’ Light said yesterday during a conference call with reporters. “This is the greatest job I’ve ever had. Now it’s time for me to step down.’’ He said he won’t be looking for another job, but will use his retirement to “think and write and sail and do other things.’’

Harvard University’s president, Drew Faust, said she would soon launch a search for a successor. She called him an “exemplary leader in a school devoted to the understanding and practice of leadership.’’

“His wisdom and advice have mattered to far more than just me,’’ she said in the conference call. “His financial wisdom has been important to all of us. My sense is one of deep gratitude, and sadness as his term ends.’’

He is leaving Harvard at a time when business schools are doing soul-searching following a financial crisis that many believe was precipitated by excess and shortsightedness among executives on Wall Street and in corporate America. Many of those executives have advanced degrees from elite business schools.

The financial crisis showed that business leaders need to focus more on risks and managing them, Light said. Those lessons are now incorporated into the curriculum, he said, but Harvard needs to “be constantly thinking about the issues, what we can learn and what we can do better.’’

Light said the business school and its next dean will face new challenges, particularly accelerating globalization. Just as businesses become increasingly global, he said, so must business schools in their faculty, students, and ideas, as well as in the leadership skills they teach.