Harvard may alter some expansion plans 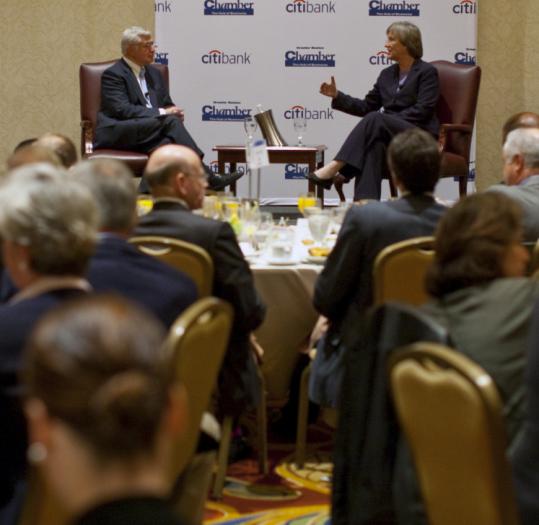 Harvard president Drew Faust indicated yesterday that there is a strong possibility the design of its much-anticipated $1 billion science complex, at the heart of the university’s expansion into Allston, may be scaled back as Harvard grapples with new financial realities.

The university is in the midst of reassessing options for Allston, including potentially “reimagining,’’ or redesigning, the 589,000-square-foot complex, Faust told reporters following her speech at a Greater Boston Chamber of Commerce breakfast held at the Marriott Copley Place hotel.

“We’re trying to assess options which would be affordable,’’ she said.

The university’s endowment has plummeted 27 percent, to $26 billion in June, amid the economic downturn. Harvard also disclosed last week that it lost $1.8 billion from its cash accounts last year because it took the highly unusual step of having the endowment fund invest the money, instead of keeping the funds in more conventional bank-like accounts.

Faust had warned in February of a delay in completing the science complex, which would house scientists working on stem cell research across Harvard’s various schools.

Stem cell researchers from Harvard Medical School, the School of Engineering, and the Faculty of Arts and Sciences who were scheduled to move into the science complex by the original 2011 opening have been relocated to a renovated laboratory space on Harvard’s Cambridge campus, Faust said. They will remain there “for some period of years until we can imagine investing more’’ in new science construction, she said.

Even though it has slowed its expansion plans, Harvard continues to be committed to the Allston community, Faust said. Construction workers are finishing the foundation of the science complex, work that is expected to continue until the end of the year. She said the university has been talking to residents about a plan to find interim uses for the vacant Harvard-owned buildings and lots in the once industrial neighborhood, where Harvard owns more than 350 acres.

“The Allston opportunity is an extraordinary treasure of Harvard and is the future of Harvard,’’ Faust told the crowd of 150 business and higher education executives gathered in the hotel ballroom. “The changed economic circumstances have had an impact on the pace with which we can move forward. . . . Our commitment to Allston has not changed. But the particular route and speed with which we undertake that has changed.’’

Faust also addressed the larger financial challenges and lessons learned during the downturn.

In response to a question from chamber president Paul Guzzi, she acknowledged that in hindsight Harvard’s financial managers took on too much risk and did not pay enough attention to the liquidity implications of their investment strategies, when Harvard has grown increasingly dependent upon its endowment to fund its operating budget.

“Risk has a different meaning from that meaning we thought it had a year or so ago,’’ Faust said. “Now we see risk as much broader in its implication. . . . I think we’ve learned some pretty significant lessons.’’