A better diet, under wraps 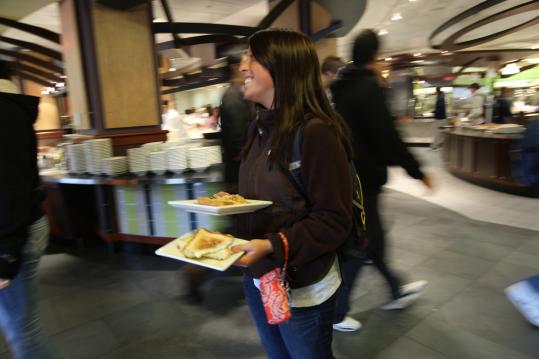 NORTH ANDOVER - Colleges trying to encourage a well-balanced diet have a message for students sizing up that all-you-can-eat smorgasbord in the dining hall: What you don’t know can help you.

More than a dozen Massachusetts colleges have recently embarked on a stealth health campaign - covert operations to address the chronic problem of overindulging students throwing nutrition to the wind.

Portions have shrunk at Wellesley College, Tufts University, and the University of Massachusetts at Amherst. Plate sizes have been reduced at Merrimack College, where newly trained servers are sneaking fresh vegetables onto plates alongside meat entrees.

Northeastern University is experimenting with tapas-style dining to encourage students to sample small plates of various cuisines. Babson College is dishing up 5-ounce servings of ice cream rather than 10. And at UMass, burgers now come as 2-ounce “sliders.’’ Even chocolate chip cookies there are made with whole wheat - a sly substitution that escaped the notice of many a taste bud.

“I don’t want to mother hen them, but I want them to eat healthy,’’ said Ken Toong, executive director of dining at UMass-Amherst, which last September was among the first schools in the state to initiate the strategy, with the motto “Small plate, big flavor.’’

The move to encourage better dining habits at college grows out of concerns that the well-publicized youth obesity problem has migrated to the nation’s higher learning campuses. Weight gain is real among some college students: A recent study in Nutrition Journal found that 1 in 4 freshmen surveyed gained an average of 10 pounds in their first semester as they adjusted to a new life of late-night eating, excessive drinking, and less exercise. But some doctors and nutritionists say they fear that among some students, the famed Freshman 15 - the amount of weight many first-year students are said to gain - has ballooned in recent years to the Freshman 30.

The problem is exacerbated as schools have, in recent years, tried to cater to students’ increasingly sophisticated palates with tastier options and unlimited self-serve portions.

“The dining halls have become more and more like resorts in some ways, with large quantities of very palatable food,’’ said Aviva Must, chairwoman of the public health and community medicine department at Tufts University School of Medicine. “The mentality is you’re only there for an hour, so you better eat everything you want.’’

Merrimack, a Catholic college with 2,000 students in North Andover, is trying to curb that attitude by training servers to dish out smaller portions.

During a recent lunch, students received 3 ounces of freshly carved roast beef, one modest scoop of garlic mashed potatoes, and a side of red cabbage, carrots, and tomatoes elegantly arranged on a 7-inch square plate - smaller than the round plates used in the past.

For some, the stealth health campaign isn’t so stealthy. “The athletes say: ‘What is this? This is bird food,’ ’’ said Varun Avasthi, district manager for Sodexo, the company that runs Merrimack’s dining program.

Many of them circumvent the school’s intentions by simply going back for more.

“Usually, I’ll end up getting six or seven plates because there isn’t enough food,’’ said Neil Berzins, a husky Merrimack football player from Ipswich, as he tucked into three small slices of buffalo pork pizza before moving on to the roast beef. “I feel like we never get enough protein.’’

He left the table, already piled high with plates, for second, then third, helpings. Upon returning with two cheeseburgers and a side of French fries - the only fried item on the menu these days - Berzins promptly removed the lettuce and tomato and stacked the two meat patties on top of each other, creating what he described as his personalized Big Mac.

Other students grudgingly expressed appreciation for the balanced meals. Some admit that in years past, when students served themselves, they never would have touched the vegetables, heaping their plates with mounds of mashed potatoes instead.

“Before, I served myself more than I could eat because the plates were bigger,’’ said Elizabeth Ortiz, a Merrimack sophomore from Chelsea.

Merrimack’s new executive chef, Roshni Gurnani, has revamped the menu to feature healthier fare and ingredients. Chicken is roasted, no longer deep fried. Milk, instead of heavy cream, is used to make mashed potatoes, which is now flavored with garlic or wasabi, not butter. And students craving more protein are directed to the quinoa, beans, and tofu at the salad bar.

At UMass-Amherst, Toong has made similar adjustments, working with a dietician and his dining staff to fine-tune 4,000 recipes, cutting out trans fat and reducing sodium by 25 percent. Whole grain pastas and pizza crusts are now on the menu.

“It’s just something we’re doing and we don’t even tell them,’’ Toong said. “They don’t notice a difference.’’

Take the popular chocolate chip cookies, which come fresh out of the oven every 20 minutes, he said. When the school began using a whole wheat dough two years ago, it proudly advertised the healthier dessert with a sign. Students stopped lining up. But when the sign was removed, they returned, Toong said.

“People have a perception that if you see food labeled whole wheat or vegan, then it doesn’t taste good,’’ he said.

The shift to a healthier diet costs roughly the same as before, said dining managers at several campuses. Fresh, local produce and better cuts of meat are more expensive, but the smaller portions mean less food is wasted.

Some universities encourage healthy eating without resorting to clandestine tactics. Harvard University lists the calorie counts of each dish at the food stations. Boston University highlights healthy dishes at each meal with a special logo and posts nutrition tips in its dining halls. Bay Path College in Longmeadow displays signs describing how much exercise is required to burn off certain foods. Others offer online nutrition journals.

Medical specialists say the stealth health method is an improvement over limitless calorie-laden portions. But to truly transform students’ eating habits, they say, colleges should pair under-the-radar campaigns with overt education.

“Whatever restraining influences parents might have had when the teenagers were at home are unshackled when kids go off to college,’’ said Dr. David Ludwig, director of the Optimal Weight for Life program at Children’s Hospital Boston. “Unless we educate this generation to improve their eating habits, what’s going to happen when they’re not in the cafeteria or when they graduate?’’