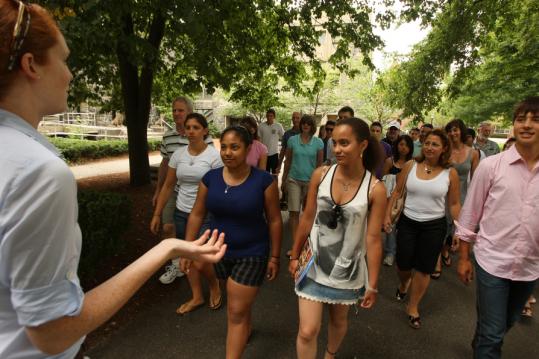 The tradition unfolded as it has for decades: Parents embarrassed their children with questions about campus security; Wielgus, a BC junior, cracked jokes; and teenage hopefuls struggled to strike a balance between totally uncool enthusiasm and boredom.

Despite the troubled economy, the cost of travel, and the growth of online virtual visits, the New England college tour not only endures, but thrives - with some schools even showing an increase in visits.

Many parents visiting area colleges last week said that even during lean times, they need to see a campus in person to know whether it is the right fit for their son or daughter.

“It’s just priorities,’’ said Katy Murphy of Jacksonville, Fla., who planned a trip solely to visit BC after her 17-year-old daughter fell in love with the school at an information session.

“Education means so much to us,’’ said Murphy. “We’ll make sacrifices.’’

Nearly 55,000 people tour BC annually, according to college spokesman Jack Dunn. He said that number has held steady this year, and admissions offices across the state are reporting similar results.

“We were all bracing for a dip,’’ said Heather Woodcock Ayres, admission director at Wellesley College. “This spring we were pleasantly surprised.’’

Northeastern University posted a small drop in annual visitors last year from their usual 35,000 to 40,000, said Ronné Patrick Turner, the dean of admission, but their numbers have bounced back. “This year we appear to be ahead of last year,’’ she said.

And Amherst College has had about 1,000 more visitors this year than last, bringing the total so far to more than 13,000, according to Thomas H. Parker, dean of admission and financial aid.

“It may be that when things get tough, the real priorities emerge,’’ Parker said.

Still, families say they are trying to save money on college visits, some by leaving siblings at home, others by combining tours with vacations.

“We’re doing six visits in three-and-a-half days to economize on hotels,’’ said Margo Carter, who drove from Baltimore with her son Spurgeon Carter to tour Tufts, Amherst, Wheaton College, and other schools.

After touring Tufts last week, Spurgeon, 17, said he had tried virtual tours but preferred campus visits, where he can pay close attention to such details as whether students greet one another as they pass. He said he enjoyed the Tufts tour, where guides point out kooky campus landmarks, like the ceremonial cannon students paint during nighttime ambushes.

“It gives you a different feel from what’s on paper and what you see in the guidebook,’’ he said.

Lisa Hammett of Virginia said she had combined a trip to visit relatives with tours of Tufts and other colleges for her 17-year old daughter.

“I don’t think we would invest the funds to make a complete trip strictly for colleges,’’ Hammett said, adding that it was still important to visit campuses however they could. She said her family had used websites to narrow the field, but thought virtual tours did not “give you much of a feel’’ for a campus.

“It’s those intangibles,’’ she said.

True believers in the campus visit, Jane and Tim Alpaugh of Randolph, N.J., said they toured 28 colleges across the country last year for their 18-year-old twin daughters. They were visiting the Boston area last week for an orientation for one daughter, who will attend BC this fall.

“You’re not going to tell them no because of the economy,’’ Jane Alpaugh said. “I won’t tell you I don’t lie awake at night, but it’s something we’re going to do.’’

And for some, like Eileen Rotty, a mother from Scituate, the recession has made the college search even more critical. Rotty said she wanted to be sure her investment was going to the right school.

“I think there’s a lot less interest in putting that name-brand bumper sticker on your car,’’ she said.

“As soon as you walk on a campus you know if you belong on it,’’ said Samantha Lawyer, 17, also from Scituate, who was visiting Boston College with Rotty and her mother, Theresa Lawyer.

Richard Doherty, president of the Association of Independent Colleges and Universities in Massachusetts, an umbrella organization for 60 institutions across the state, said he realized how important the instinctual factor was when his own children were picking colleges.

He said he drove to one school he thought would be a good fit, only to have his son declare, “I just don’t like this place’’ and refuse to get out of the car.

Doherty said he was not surprised that campus visits have remained a decisive factor in the college search, despite the recession.

“There really isn’t anything quite like . . . the college tour that allows a student to say, ‘Do I see myself here?’ ’’ he said. Tours are also a boon for the region’s tourism and hospitality industry, he added.

Although there are no exact figures for the state, Doherty said, “There’s a tremendous amount of traffic that the colleges generate that translates into hotel rooms and meals.’’

On the BC campus, Wielgus, who is from Westchester, Conn., led his tour group over cobblestone paths and lush lawns, delivering endless facts and self-effacing comments at breakneck speed, auctioneer-style.

The soon-to-be high school seniors who were following him peeked into a basketball practice and inspected a physics laboratory. They craned their necks up toward the stained-glass windows in an airy library. They were waiting for that sense of belonging to overtake them: Could I toss a Frisbee around here? Could I watch the sun come up after an all-nighter here? Is this my college?