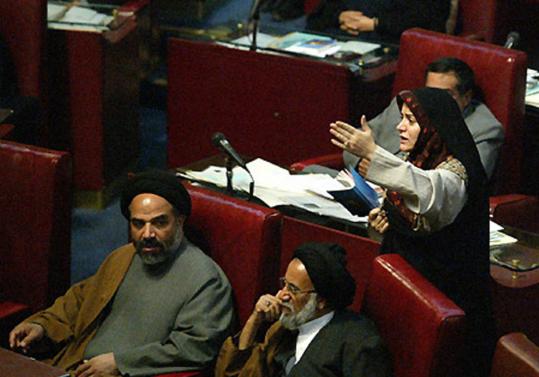 The “Lion Woman’’ of Iran sits outside her 10th-floor office atop the main library at the University of Massachusetts-Boston campus, chafing with frustration as she talks of the turbulence shaking her homeland.

She knows this story all too well: The upwelling of resistance, the retaliatory fist of state power, the fading sense of hope.

“This government is acting like a wild animal,’’ Fatemeh Haghighatjoo says.

After four years of exile, she has lost none of her quiet ferocity, or blunt determination. A visiting scholar at UMass, she has led an appeal to the UN secretary general to appoint a special envoy to investigate abuses against activists in Iran, and is pushing for the United States to do more as well.

But while she has come to enjoy some of the peaceful pleasures of life here - like curling up with her 6-year-old daughter to watch cartoons - she longs to be back in the boiling center of things.

Haghighatjoo was one of the youngest members of the Iranian Parliament when she took on the power structure that underpins the country’s supreme leader, Ayatollah Ali Khamenei. After a clerical crackdown on reformers, 124 members agreed to resign. And when they considered who among them should be first to speak, all eyes turned to her.

Then as now, determined women like her played a key role in demanding democracy in Iran. And what she said then seems remarkably prescient today: “By conducting sham elections, the power-drunk opponents of the popular vote have turned their backs on all the achievements of the revolution. They seek to erase republicanism and freedom from the political face of this country forever.’’

She paid a steep personal price for her daring. She was convicted of misinterpreting and insulting the clerical hierarchy and sentenced to 20 months in prison, but fought the decision. She resigned from Parliament in February 2004 and arrived in Boston 18 months later. Although she is gone from Iran, her example lingers for her admirers.

“She is still very much respected among women’s groups and also the student movement,’’ said Ziba Mir-Hosseini, an Iran scholar at the School of Oriental and African Studies in London. “She was among the first who really saw what was going on, the collapse, or marginalization, of the republican side of the Islamic Republic.’’

With charges still pending against her, she came to the Massachusetts Institute of Technology in September 2005 as a visiting scholar, with her infant daughter and her journalist husband in tow.

She told no one she was leaving for the United States - not even her mother. “I just told them I was going to Cambridge, and they thought I meant the other Cambridge, in England.’’

The couple and their daughter made it to Dubai without incident, got their US academic visas, and flew to Boston in September 2005. “I didn’t speak English then. My life was so hard, it was horrible.’’

John Tirman, the executive director of MIT’s Center for International Studies, arranged for her to come to the United States and took the family under his wing, helping them rent an apartment and raising a bit of money for their living expenses. Haghighatjoo gradually felt more at home, and grew to appreciate what she calls Americans’ acceptance of diversity and differences.

Squarely of the traditionalist middle class, from a devout Shi’ite family that supported the revolution, Haghighatjoo was brought up by her mother after her father died in an accident when she was just 6. She wears a hijab, the Muslim headscarf. She became a student leader as she earned her university degree in psychology, and went on to study for a doctorate in counseling.

After her year at MIT, she earned successive stints as a visiting scholar at the Kennedy School at Harvard, at the University of Connecticut and now at UMass-Boston, where she is helping design the online version of the certificate program in the Center for Women in Politics and Public Policy.

Going home feels unrealistic now, given the government’s crushing of protests against President Ahmadinejad’s reelection, and the arrests of hundreds of protest leaders, some of whom Haghighatjoo knows well and worries about constantly.

“If my country’s situation is not changing, I have to plan to stay here at least another four years,’’ she said in an interview. But she adds: “I would love to live in my country, more than in any other country.’’

Shahla Haeri, who leads the Women’s Studies Program at Boston University, was in Iran during last months’ elections and protests “I’m sure she would have felt right at home,’’ she said of Haghighatjoo. “The women there were just so amazing. It wasn’t just one or two, veiled or unveiled, it was a huge number of women.’’

Haeri cautioned against seeing Haghighatjoo as a feminist, noting her traditional roots and adding that women have long played a vocal role in Iranian public life. But she added that Haghighatjoo “was very courageous then, 10 years ago, when it was harder to speak out.’’

Writing in the journal Middle East Report in 2005, Mir-Hosseini, the London-based Iran specialist, provided a detailed account of Haghighatjoo’s challenge of the conservative clerics in her 2004 resignation speech: “The protesting MPs knew that Haghighatjoo was someone who never minced her words and would say what many of them did not dare [and] chose her to speak to the nation on their behalf. She did not disappoint them.’’

She had spoken out that way from the moment she arrived in Parliament in 2000 at age 31, aligning herself with reformist President Mohammad Khatami and serving on a committee that was responsible for human rights. She recalled in an interview that her role brought her into the nation’s jails, where she saw tortured prisoners first-hand.

Using her training in psychology and counseling, she gathered family reports and testimony from victims of torture, forced confessions and detention without charge. And then she made her accusations against the powerful Revolutionary Guard and the judiciary directly and openly, in the Parliamentary chamber. “I had enough documents to accuse the revolutionary court. But then they opened a case against me instead.’’

She says now that she entered Parliament believing Islam and democracy could coexist; she left office believing in “separation of mosque and state.’’

In her journal article, Mir-Hosseini said many Iranians were awed by Haghighatjoo’s willingness to defy Khamenei and the Guardian Council and judiciary. “On the reformist websites, women have celebrated Fatemeh Haghighatjoo’s politics of honesty and integrity in poetry and prose. They pun on her name (“Truth/Justice Seeker’’) and praise her as a “lion woman’’ - a traditional Persian term for a prominent and brave woman.’’

Mir-Hosseini quoted a woman named Mona Sabeti, from a site since banned and taken down from the Internet, writing to Haghighatjoo’s daughter, Sara: “You know, whenever a girl is born in this land, her mother’s heart sinks. The mothers of this land give birth to girls whose life is worth half that of boys. . . . The lion-woman who is your mother has silenced this myth forever.’’

As she adapts to American life, Haghighatjoo says she sees in the cartoons she watches with her daughter “the components of democracy - teamwork, how to respect others’ ideas. Kids here, from the moment they are born, learn and absorb democratic values. If the US wants to export democracy, cartoons are one way to market it. A totalitarian government would block these cartoons,’’ she said.

As a psychologist, she also appreciates the problem-solving her daughter is learning in her school in Cambridge. “Here, the school raises many questions. Challenging is a value here. In my country it’s hard to challenge your teacher.’’

And she sees in American society an enviable vein of accountability. “If my daughter falls she says, ‘I hurt myself.’ In my country we would say, “the floor hurt me.’ We don’t provide enough room to accept responsibility for our faults.’’

Haeri, the BU professor, said it was striking how far Haghighatjoo had come since arriving in the United States. “She is teaching a lot of young people what went on there, and in the process is becoming a lot more well-rounded, democratic person. She does have an open mind, and an observing, absorbing intelligence. It has been very good for the community and for her as well.’’

James F. Smith writes about Boston’s global links. His blog is at www.boston.com/worldly boston. He can be reached at jsmith@globe.com