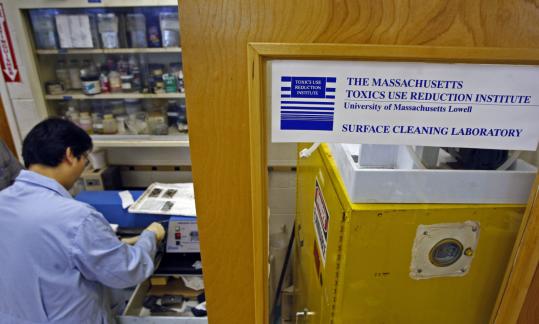 It is a miniscule slice of the state’s $27 billion budget - less than $1.5 million to fund an obscure environmental agency at the University of Massachusetts at Lowell.

But the Toxics Use Reduction Institute is part of a state-mandated program that has reduced the use of hazardous substances by local manufacturers 41 percent in its 20-year history. That funding has been eliminated, and the institute’s 18 employees do not know where their next paycheck will come from - or whether it will come at all.

The institute is just one casualty of a fiscal crisis that has ravaged Massachusetts, forcing the state to raise taxes and cut funding. About two weeks ago, the Legislature’s budget conference committee decided to eliminate the Senate and House line items that would have provided the institute with $1.2 million to $1.4 million for fiscal 2010, leaving it to UMass-Lowell to fund the agency. The committee did not specify how much it expected the school to provide, but the question is urgent. The institute’s fiscal year ended yesterday, and it has no funding, effective today.

“We’ve lost $3 billion in revenue. We have to cut in areas and consolidate in others. This was a consolidation,’’ said committee member Senator Steven C. Panagiotakos, whose district includes Lowell. “It’s not something that if we had the money we would want to cut . . . but given the fiscal realities we are facing, it’s the best we could do.’’

Officials at UMass-Lowell, meanwhile, said the university does not have the resources to fund the institute, which is a money maker, helping to generate $3.3 million in revenue for the state in 2008 from fees charged to help 550 facilities look at how they use toxic substances.

“Obviously, this is a tough budget year,’’ said university spokeswoman Renae Lias Claffey, who said that the school lost more than $4 million in state funding in the last several months and had to cut 50 full-time jobs and 20 part-time positions. “There’s no funding in our budget for the program.’’

Institute and university officials are planning to meet next week to talk about what to do.

“We’re trying to figure out contingency plans at different levels of funding - who can stay and who must go,’’ said Michael Ellenbecker, a professor specializing in workplace environments who directs the institute. “If we get no money or virtually no money from the university, we would have to close the institute and lay everyone off.’’

Senator James B. Eldridge said he is pushing to get the institute funded through a supplemental budget.

“The most important point and value of the program is it has made Massachusetts families safer over the last two decades,’’ he said. “It would really be a blow to consumers and to the environmental community if this program were eliminated.’’

The institute - which was the first of its kind in the nation - was born from the state’s Toxics Use Reduction Act of 1989, which called for the reduction of toxic substances used in Massachusetts.

It works in conjunction with the Massachusetts Department of Environmental Protection and the Office of Technical Assistance at the state’s energy and environmental affairs office.

State energy and environmental affairs Secretary Ian A. Bowles said the Institute plays a vital role by identifying and helping businesses to stop using chemicals that are harmful to people’s health.

“We think it’s an important function, and we’re hopeful that it will be retained,’’ Bowles said.

Fall River lighting manufacturer Lightolier, a subsidiary of North America, has worked with the institute since its inception, said facility manager Ron Westgate. With the agency’s help, Westgate said, Lightolier has reduced its use of volatile organic compounds more than 96 percent - from 130 tons a year to 4 tons.

The agency “helps us provide a safer workplace for our employees and it helps us be a more environmentally-conscious neighbor in the community,’’ Westgate said.

“And it definitely helps us compete in the global market because it reduces our overhead cost.’’