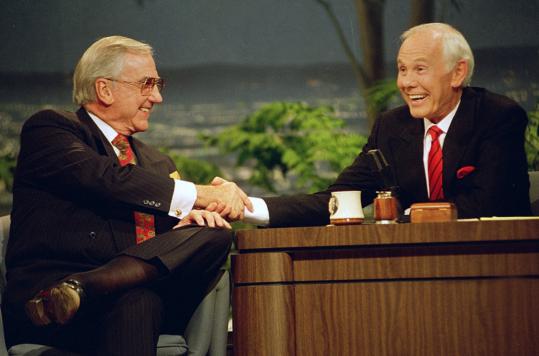 Ed McMahon and Johnny Carson during the final taping of the “Tonight Show,’’ in 1992. Mr. McMahon, who went to high school in Lowell, started working with Carson in 1957. (Douglas C. Pizac/Associated Press)
By Mark Feeney Globe Staff / June 24, 2009
Text size – +

Ed McMahon, whose nearly three decades as Johnny Carson’s sidekick on “The Tonight Show’’ and innumerable appearances as television pitchman and master of ceremonies made him one of the medium’s most ubiquitous figures, died yesterday. He was 86.

“My talent is making it seem I have no talent,’’ Mr. McMahon once wrote. “It took me years of hard work to convince an audience that I wasn’t working.’’

“If I could fake that much laughter, I’d be the finest actor in the world,’’ Mr. McMahon once said. “I thought Johnny Carson was very funny.’’

Carson and Mr. McMahon were a match made in late-night heaven. Where Carson was slight, coiled, and preternaturally quick, Mr. McMahon was oversized (6 feet 4 inches tall, and usually well over 200 pounds) and the soul of unhurried amiability.

His response of “Hi-yo!’’ to a particularly racy Carson line was a boys-will-be-boys battle cry, and his nightly introduction - “Heeeere’s Johnny!’’ - became one of the best-known catchphrases in popular culture. When Jack Nicholson’s homicidal maniac in the 1980 film “The Shining’’ used it to announce an ax-wielding assault, everyone in the audience got the joke.

Getting the joke was fine, but Mr. McMahon’s fonder wish was that everyone in the audience buy the product. Among the companies he was associated with as spokesman were Budweiser, Alpo (he professed to have served it to some 4,000 dogs on camera), and American Family Publishers sweepstakes. Indeed, the other phrase most associated with Mr. McMahon may have been the sweepstakes come-on, “You may have already won $10 million!’’

Mr. McMahon had few if any peers as a pitchman. By his estimate, he did more than 60,000 commercials on radio and television. “Of all the things I am, most of all I’m a salesman,’’ he declared in his 1998 memoir, “For Laughing Out Loud.’’ “I’ve always said with great pride, if I can hold it up or point to it, I can sell it.’’

Mr. McMahon, who was born in Detroit on March 6, 1923, came by that talent as a birthright. His father, Edward Leo Peter McMahon Sr., was at various times a traveling salesman, entrepreneur, charity fund-raiser, and sideshow operator. The one professional constant was movement. By the time he was 5, Mr. McMahon and his mother, Eleanor (Russell) McMahon, had accompanied his father to some 40 states.

The closest thing Mr. McMahon had to a home was in Lowell, where his paternal grandparents lived. He spent summers there, as well as attending a year of junior high school and his final two years of high school.

While still in school, Mr. McMahon worked as a bingo caller. His dream, though, was to be a radio announcer. He took elocution classes at Emerson College and got a job on Lowell’s WLLH. As part of the Navy’s V-5 program, Mr. McMahon then enrolled at Boston College, where he was freshman class president. He served as a Marine flight instructor in Florida during World War II.

Rather than returning to BC, he enrolled at Catholic University in Washington, D.C., because he could major in speech and drama there.

Upon graduation, he hosted several television programs in Philadelphia. He was recalled to active duty during the Korean War, flying 85 combat missions in an artillery-spotting plane.

Back in Philadelphia, Mr. McMahon resumed his television career and began commuting to New York to do commercials. In 1957, he was offered the job of announcer for a daytime game show called “Who Do You Trust?’’ The host was Carson.

Mr. McMahon later described his introduction to Carson as “about as exciting as watching a traffic light change.’’ Yet it led to television history. The next five years amounted to a long dress rehearsal for “The Tonight Show,’’ with Carson and Mr. McMahon perfecting their onscreen chemistry.

“We developed a unique relationship,’’ Carson later wrote, “similar to that which married couples often experience, an unspoken method of communication. . . . By a look, a pause, body language, or tone of voice we could tell each other the direction to go.’’

“My role on the show was never strictly defined,’’ Mr. McMahon said of his “Tonight Show’’ years. “I did what had to be done when it had to be done. I was there when he needed me, and when he didn’t I moved down the couch and kept quiet.’’

A series of financial and medical setbacks left Mr. McMahon flirting with bankruptcy last year, which he averted with the sale of his house.

Of his ancillary activities, the best-known was “Star Search,’’a syndicated television talent show that ran from 1983-1995. Among the performers who appeared on the show were Rosie O’Donnell, Martin Lawrence, Britney Spears, and Drew Carey.

“I am one of the very fortunate people who grew up to do exactly what I spent my whole childhood dreaming of doing,’’ Mr. McMahon once wrote, “even if no one is quite sure exactly what it is that I do.’’

Funeral arrangements were to be announced.