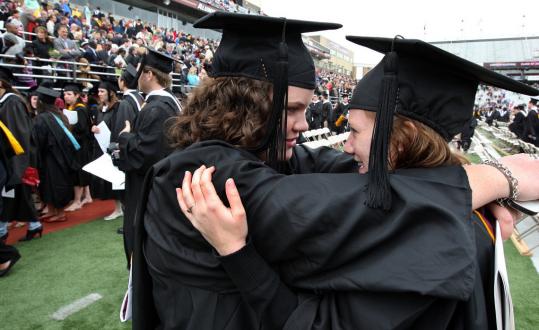 CHESTNUT HILL - Speaking of "history and memory and possibilities," award-winning filmmaker Ken Burns asked Boston College graduates yesterday to mind the past, while encouraging them to draw inspiration and guidance from it at a time of seemingly daunting problems.

"History is not a fixed thing, a collection of precise dates, facts, and events that add up to a quantifiable, certain, confidently known truth," Burns said. "It is an inscrutable and mysterious and malleable thing. Each generation rediscovers and reexamines that part of its past that gives its present - and, most important, its future - new meaning and new possibilities."

On a cool, drizzly morning at Alumni Stadium, Burns recounted the "cold and blustery" day when Abraham Lincoln gave his 1861 inaugural address. Calling to mind the founding of the union as he tried to prevent its fracture, "this remarkable poet-president" delivered what Burns called one of the greatest sentences ever written: "The mystic chords of memory, stretching from every battlefield and patriot grave to every living heart and hearthstone all over this broad land, will yet swell the chorus of the union when again touched, as surely they will be, by the better angels of our nature."

That line, Burns said, was imbued with optimism even as Lincoln recognized the crude instincts and undercurrents of human nature and history that produced slavery and war.

"We have counted on Abraham Lincoln for more than a century to get it right when that undertow in the tide of human events has threatened to overwhelm and capsize us," said Burns, whose documentary on the Civil War drew 40 million viewers to PBS when first broadcast in 1990. "We return to him constantly for a sense of unity, conscience, and national purpose."

With 10,000 spectators in the stands, Burns told the 2,250 undergraduate and more than 1,100 graduate degree recipients on the rain-slicked field that they were encountering "a new, subtler, perhaps more dangerous civil war than Abraham Lincoln faced." Specifically, he spoke of the anger, divisiveness, and war that subsumed national unity after Sept. 11, 2001; of the unchecked greed and consumption that contributed to "mindless consumerism" and economic collapse; of mobile technology that disengages people from one another even as it purports to connect.

"It is into that world that you now plummet, unprotected from the shelter of family and school, but drafted nonetheless into a new union army that must be committed to preserving the values, the sense of humor, the sense of cohesion that have long been our hallmark and beacon," Burns said. "But also know that you have help. These dark and divisive forces are not without their natural enemies."

He urged them to seek community, to serve others, to be skeptical but not cynical, to be enthusiastic. To defend the arts, read, keep journals, visit national parks, he told them, to live, as it were, "in Bedford Falls and not Pottersville," allusions to towns mentioned in the Jimmy Stewart movie, "It's a Wonderful Life."

In its 133d commencement, BC awarded honorary degrees to Burns and five others: Margot Cameron Connell, a university volunteer and the widow of William F. Connell, for whom BC's nursing school is named; Joseph E. Corcoran, the alumnus and real estate developer who helped pioneer the concept of mixed-income housing; the Rev. Daniel J. Harrington, an alumnus, Jesuit priest, and scholar; Carolyn A. Lynch, a philanthropist and leader of numerous volunteer organizations; and Benaree Pratt Wiley, a mentor and advocate for minorities in leadership as head of The Partnership and now her own consulting firm.