For many, pomp being tempered by circumstances 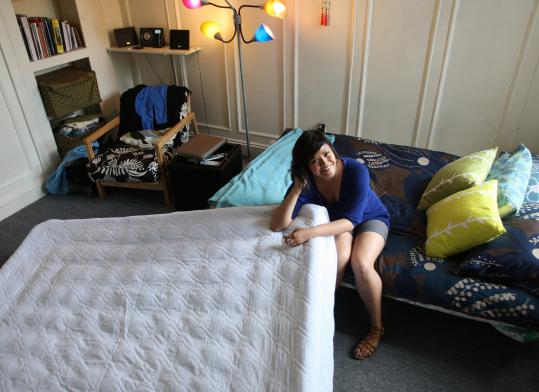 It's a springtime ritual, one eagerly anticipated by hoteliers and restaurateurs. Each weekend starting this month and through the beginning of June, scores of parents descend upon the region for the college commencement season. In boom times, they rack up hotel bills, splurge on meals, and open their wallets at the shops along Newbury Street.

But this year, amid the recession, many families are injecting a sobering dose of frugality into the pomp and circumstance. More moms and dads are eschewing hotels to bunk in Spartan dormitory rooms or squeezing into their children's apartments for the weekend. Demand for $50-a-night dorm rooms at The College of the Holy Cross has jumped 60 percent, and latecomers are now being turned away.

Others from as far as New York plan to drive here on graduation morning and head home after the ceremony to save on costs.

Bracing for a leaner year, some local hotels have lowered their peak rates and dropped their two-night minimum. For high-end hotels and restaurants, though, the party continues as usual, with no cancellations for bookings made as far as a year in advance. After all, they say, graduation is no time to scrimp.

Some families say they don't have much choice.

At Boston University, which holds commencement Sunday, senior Kaia Balcos will blow up two air mattresses for her parents, aunt, and cousin to sleep on in her studio apartment near campus, saving them hundreds of dollars a night. For her high school graduation, her parents hosted a dinner for 15 at a New Jersey restaurant. No plans are in the works for a party this weekend, she said. And she discreetly penned "no gifts please" on her announcements.

Her father, Ron, acknowledged he'd rather be in a hotel.

"We're worried about cutting back only because you never know what will happen," said Balcos, a biochemist at a New York hospital. "But we're not hurting yet."

Holy Cross has booked all 80 of the dorm rooms it set aside for next Friday's graduation. In years past, only about 50 rooms would be filled, said Paul Irish, cochairman of the commencement planning committee. The suites with private baths make bringing the extended family more affordable, he said, though they will be sleeping on twin beds.

Freddy Sinchi, the first in his family to graduate from college, wants as many family members as possible to see him receive his Holy Cross diploma. He reserved three dorm rooms for at least eight people - his parents, younger siblings, uncle, and church pastor. Those who don't fit will sleep in his dorm room. More guests will drive up for the ceremony Friday, leaving Harlem, N.Y., by 5 a.m.

"This is much more economical for us," Sinchi said.

Paige Singleton booked four Holy Cross dorm rooms for her parents, sisters, and grandparents, who otherwise would not all have been able to afford to come. They will spend one night in Boston before driving home to New Orleans in a rented van with her belongings. The "bonding road trip" will serve as their family vacation this year, she said.

Instead of a fancy meal out to celebrate, her family will eat in the college dining hall, she said.

"I don't want them to have to go out," she said. "Everybody seems to be on a budget, so it makes it a little tough to full out celebrate."

Schools, too, are cutting back on the pomp. Wheaton College in Norton eliminated embossing on the program cover and ordered 400 fewer programs. Clark University has begun e-mailing invitations to commencement events. Gordon College in Wenham will no longer serve refreshments. And Brandeis is limiting the number of decorative plants to adorn the graduation stage; there also nixed the traditional balloon drop.

Each May and June, Massachusetts colleges draw more than 275,000 commencement guests, who have the economic impact of "back-to-back Super Bowls," said Richard Doherty, president and chief executive of the Association of Independent Colleges and Universities in Massachusetts.

In Greater Boston, home to 45 colleges and universities, graduations bring in about $90 million each spring to the local hospitality industry, said Pat Moscaritolo, president and chief executive of the Greater Boston Convention and Visitors Bureau.

"Graduation week is a unique moment in a family's history," Moscaritolo said, "and especially given the colleges we're talking about here in the Boston and Cambridge area, people will come and celebrate and spend."

Some hotels like The Lenox hotel in Copley Square and the Fairmont Copley Plaza have lowered their room rates for the graduation season. The Lenox even has a sprinkling of rooms open two weeks from now, whereas last year, they were booked solid, said Daniel Donahue, general manager of The Lenox. Rates there start at $245 a night, compared with more than $300 last year.

"May and June in Boston, this is where the world wants to be. This is typically not a rate-sensitive time of year," said Paul Tormey, general manager of the Fairmont Copley Plaza. "But if your kid was a senior last year, you would have paid more."

In some quarters, though, parents are still shelling out big bucks for a luxurious commencement experience. At Upstairs on the Square in Cambridge, reservations are nearing capacity for the restaurant's $85-a-head prix fixe four-course dinner the night of Harvard's graduation, June 4. So far, there have been few cancellations, said owner Mary-Catherine Deibel.

She booked the 300 reservations the restaurant normally gets for the commencement dinner. Two families are even throwing private afternoon cocktail receptions for their graduates at the restaurant.

"Part of it is Harvard," she said. "There is still a lot of money at Harvard."

The Hotel Commonwealth in Kenmore Square, which raises its rates by a third, from $450 to $525 a night, during commencement season, is full for the BU graduation this weekend. Most rooms were reserved a year ago.

"In this economy, we appreciate all the more those events that will generate this kind of demand," said Adam Sperling, the general manager. "As long as people continue to graduate, we'll continue to reap the benefits."