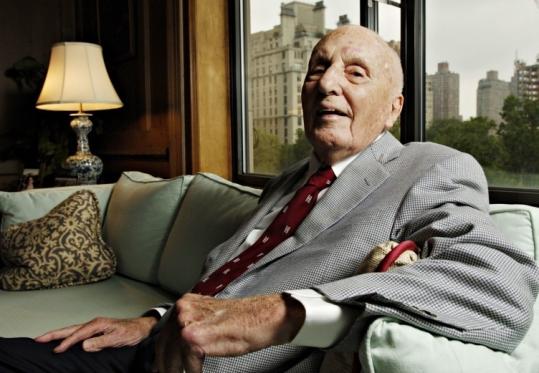 Albert Gordon was the oldest graduate of both Harvard College and Harvard Business School at the time of his death, according to Harvard Magazine. (Daniel Acker/Bloomberg News/File 2006)
By Douglas Martin New York Times / May 8, 2009
Text size – +

NEW YORK - Albert H. Gordon, who helped pick up the pieces of a shattered Kidder Peabody after the 1929 Wall Street crash and built the firm into what Forbes magazine called "a minor powerhouse on Wall Street," died May 1 at his home in Manhattan. A native of Scituate, Mass., he was 107.

His son John announced the death.

Mr. Gordon lived to become an eminence grise of the investment community, began running marathons in his 80s and at his death was the oldest graduate of both Harvard College and Harvard Business School, according to Harvard Magazine. In 1960, Fortune magazine listed Mr. Gordon as one of the 10 most powerful men on Wall Street and as the financial community's most successful underwriter and salesman. It noted that he ordered his men to read "The Elements of Style," written by William Strunk Jr. in 1918 and revised by E. B. White in 1959, to improve their reports.

In ruling that the investment industry did not violate federal antitrust laws in 1953, Judge Harold R. Medina noted the industriousness of Kidder. He said Mr. Gordon's firm had "forged its way strictly on the merits from a minor position in 1931 to that of one of the country's leading underwriters."

Mr. Gordon arrived on Wall Street in 1925 as a new Harvard Business School graduate, to take a job as a statistician with Goldman. He traveled an immense territory selling commercial paper; he was on a train 12 nights out of 14. (He was later one of the first investment bankers to fly.)

In those days, investment bankers strove for decorum.

"We wore silk collars," he said in an interview with National Public Radio in 2004. "We wore hats. We took ourselves seriously."

Kidder itself was a respected Wall Street institution when Mr. Gordon arrived in 1931. The firm had been prominent in the early financing of the American Telephone and Telegraph Co.

But two years after the crash, it was broke. J.P. Morgan & Co. arranged financing that included a cash infusion from the Webster family of Stone & Webster, the engineering company. Frank Webster had led Kidder for most of the first third of the 20th century.

Kidder came back. From 1960 to 1964, it ranked second among all investment banking concerns in a category of securities offering, The New York Times reported in 1965.

Mr. Gordon was chairman and a large shareholder of Kidder in 1986 when bought the business. Under G.E., Kidder floundered and ended up selling most of its assets to the competing PaineWebber Group in 1994. Mr. Hovey retired in 1952, and Mr. Webster died in 1957.

Albert Hamilton Gordon was born in North Scituate on July 21, 1901. His father, after working as a sheepherder in Wyoming, had moved east to become a successful leather merchant, supplying the British Army in World War I.

At his first job with Goldman Sachs, he got a $2 million deal from National Dairy Products, a predecessor of . He was entitled to a substantial commission, but his boss took all the credit. Mr. Gordon learned an important lesson, he told Forbes in 2000, "You can't retain employees if you don't spread credit around."

The Times reported in 1989 that Mr. Gordon had imbued Kidder with "an air of positive gentility, giving employees a free hand to pursue deals." He also gradually sold back ownership of the firm to its workers, to signal that he would not challenge the new management he had recruited. He did not want anyone to think of him as "that greedy old bastard," he told Business Month in 1989.

As one of the oldest surviving Wall Street veterans of the crash of 1929, Mr. Gordon was often asked to reflect on how he thought it had happened. In 1987, he told The Nation magazine, "young men thought they could do anything."

Mr. Gordon became something of a legend for his dedication to physical fitness, which he believed explained his longevity. He took one puff of a cigarette in his life, he said, didn't salt his food, and limited his alcohol intake to a glass of champagne a year.

He was twice the oldest participant in the London marathon and sometimes walked from airports to his hotel. He made cold calls to prospective clients well into his 90s. At 105, he was still working four days a week at Deltec Asset Management.

Mr. Gordon was a past president of the Harvard Club of New York, and his generosity to Harvard is evident in the Albert H. Gordon Track and Tennis Center there, as well as a professorship at the business school. The New York Road Runners named its library and an annual race for him.

In the 1960s and '70s, Mr. Gordon offered cash rewards to employees who quit smoking. He always flew economy, and when he noticed a young Kidder vice president sitting in first class, Financial News reported in 2001, he penciled a note for a flight attendant to pass on.

"What is the food like up there?" it read.