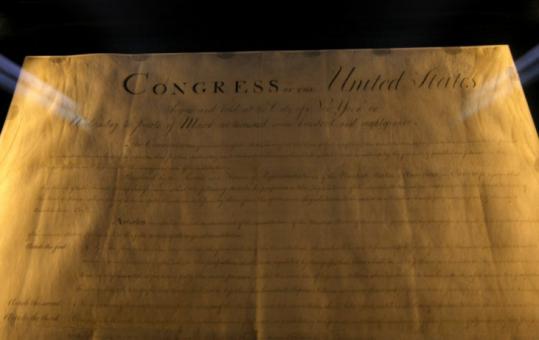 An original copy of the Bill of Rights and other documents at the museum have an estimated value of $100 million. (David L. Ryan/Globe Staff)
By Jenna Nierstedt Globe Correspondent / April 17, 2009
Text size – +

The Commonwealth Museum at the state Archives Building is reopening after an upgrade with an exhibit that shows off documents steeped in history that have lain unseen for years in its vaults, including original copies of the Declaration of Independence and the Bill of Rights.

The museum, located at Columbia Point near the John F. Kennedy Presidential Library & Museum in Dorchester, will feature a new exhibit, "Our Common Wealth: the Massachusetts Experiment in Democracy," when it reopens to the general public on Monday. The exhibit highlights the influence that the state's early style of government had on the rest of the country.

The documents on display have an estimated value of $100 million.

John Hancock, the president of the Continental Congress, signed the declaration and sent it to Boston in January 1777 with instructions that it "form a part of the archives of your state."

"You know it's very difficult to open a museum in Massachusetts without being accused of being chauvinist or celebratory or self-congratulatory, but as John F. Kennedy said in 1961, 'We do not imitate - for we are a model to others,' " said Robert J. Allison, chairman of the history department at Suffolk University, at a reception for the museum's opening yesterday.

The galleries of the new museum focus on the Colonial period, the Revolution, the constitutional period, and the reform period through the stories of four families: Native American, Anglo-American, African-American, and Irish-American.