A new factor in making that college: loving it 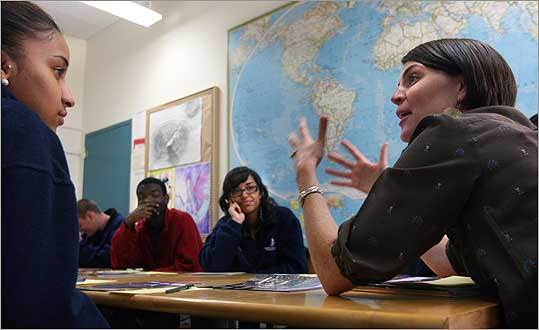 (Globe staff/Michele McDonald) Students at Prospect Hill Academy, a charter school in Cambridge, visit with Liz Creighton, a Williams College admission officer, at right. Colleges around the country are looking for signs of interest from students as they judge their applications.
By Peter Schworm Globe Staff / March 15, 2009
Text size – +

Like wary suitors, colleges are searching for signs of commitment from applicants before they extend admissions offers, hoping to find out whether their affection is mutual.

In the increasingly tense courtship of college admissions, more selective schools are smiling upon high school students who show sincere interest in attending, closely tracking such things as whether they visited campus, responded to recruiting messages, or even joined an online chat with an admissions officer.

"You're going to want those students who also want you," said Gil Villanueva, dean of admissions at Brandeis University. "Everything else being equal, between a student you know and a student you don't, you will go with the known commodity."

Villanueva, like many admissions officers, said keen enthusiasm for a school is no guarantee but can sometimes tip the balance in students' favor.

The growing importance of "demonstrated interest" is the product of a number of overlapping factors. High school students are applying to a greater number of colleges to better their odds of acceptance, which has made it harder for colleges to estimate how many actually plan to come. This year, the financial downturn and the credit crunch have further complicated the process, with families expected to base their decisions more on cost.

Amid such unpredictability, students who seem excited at the prospect of arriving on campus in the fall are in high demand, admissions officers say. In an ironic twist, the volatile nature of admissions has given students a measure of control over the process.

In its annual survey of admissions trends, the National Association for College Admission Counseling found that 22 percent of colleges gave interest "considerable importance" in admissions, up from 7 percent in 2003. Another 30 percent of schools rated it as moderately important.

In terms of influence, it outranked such admissions standbys as counselor and teacher recommendations, interviews, and extracurriculars, and was narrowly behind class rank and personal essays.

"We track every single contact we have with students," said Kelly Walter, executive director of the admissions office at Boston University.

Parents and applicants take note: Walter and other college officials said they do not hold it against students who cannot afford to visit campus, particularly in the slumping economy. There are many other ways students can let colleges know they are among their top choices, including attending a college fair or reception in their hometown. Even better, they said, is introducing themselves to an admissions officer and striking up a conversation.

"I remember," Walter said, speaking of such chats.

Admitting more students who truly want to be there, college officials say, creates an energetic and close-knit culture on campus. And by producing loyal alumni with soft spots for their colleges, it also pays long-range dividends in fund-raising.

Giving preference to students whose interest seems genuine also helps colleges boost their image. By targeting students who are more likely to attend, they can admit a smaller percentage and still fill out their freshman class, making them appear more selective and more desirable.

Families have caught on to the new approach. John Mahoney, director of undergraduate admissions at Boston College, said parents who visit the campus often scan the premises for the sign-up sheet that will let them make their presence known.

"We tell them we're not tracking that," he said. "But they want to make sure they let us know they were there."

Mahoney said BC does not consider student interest and said he suspects some students feign interest to boost their odds.

"Students are being conditioned to express interest, but if they are doing so at 16 Northeastern schools, how good of a barometer is it?"

But some say that students who cultivate relationships with schools - through the delicate art of admissions flirting - gain a much better chance of winning their hearts.

"It's almost like a dating game," said Phil Meisner, founder of CAPS, the College Application Processing Service, in Washington. "No one wants to commit, but everyone's looking for a signal. Why shouldn't students be able to let colleges know they want to go?"

College officials say students rarely go overboard in their self-marketing campaigns, although they fear more will as the practice becomes more prevalent. Others worry that judging students by expressions of interest could unfairly help wealthier students whose parents and counselors know the system's subtleties and how to exploit them.

"We don't want to penalize students who don't know that 14,000 contacts with an admissions officer could tip the balance," said Gail Berson, dean of admission at Wheaton College in Norton.

This spring, a student whom Berson met at a New York City high school has become a "steady pen pal," even sending her copies of his latest short stories. His persistence convinced Berson he would attend, and his writing ability convinced her he should be admitted, despite a so-so academic record.

Alex Michel, a senior from Weston, said she knew that Wheaton was her top choice as soon as she visited the campus, and she immediately made her intentions known. She visited campus several times, including an overnight stay with students, and e-mailed admissions officers with questions. In December, she was accepted, and now she chats on Facebook with her eventual classmates.

"I know colleges are looking for students who are enthusiastic," she said. "When I visited campus, I always made sure the admissions office knew I was there."