THIS STORY HAS BEEN FORMATTED FOR EASY PRINTING
Starts & stops

MIT inching closer to making CityCars a reality on wheels 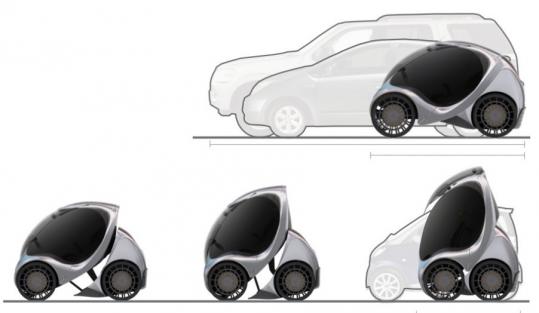 The stackable cars hatched at an MIT lab over the past three years seem more like a utopian vision - and a mind-blowing conversation starter - than real life. But the school is closer than you might think, much closer, to moving them to the road.

The fascinating CityCars, previously described in the Globe and displayed at the MIT Museum, are small electrical pods on wheels that can hook into a citywide network of chargers and rely on computers for navigation and operation.

Like community luggage carts in airports or rented bicycles in Paris, they do not have to be dropped off at the same spot where they are picked up, nor are they owned by a single driver. They were developed by the Smart Cities group led by architect William J. Mitchell, a professor of architecture and media arts and sciences.

MIT is submitting a proposal this month to build a network of the cars for a government in Asia, said Cynthia Barnhart, associate dean of engineering at MIT.

"I think we're serious about it," said Ryan Chin, a doctoral candidate working with Mitchell.

Barnhart would not disclose the city because the project is in competition with other innovation ideas. If accepted, MIT could begin a pilot project within five years, at a cost of tens of millions of dollars, she said. Deploying them in an entire city would cost at least hundreds of millions, Chin said.

The implications are immense because they point so vividly to the problems of our existing transportation system and its dependence on gas, vast amounts of space, and guesswork on the best times and routes to avoid gridlock. The stackable cars represent as much a change in the way a city works as they do a technological innovation. They involve reorganizing how we think of such basic precepts as driving, car ownership, space, and fuel.

Because the cars are part of a single, computerized network, their placement can be coordinated to reduce traffic congestion or make transportation options available at peak times and places. Rental charges could fluctuate to encourage alternate routes. Commuters could keep track of where and when cars and parking spaces are available in real time, using cellphones or other hand-held devices to track the cheapest or the most convenient car, spot, or route.

"Technology is just an ingredient in this," Barnhart said. The broader idea is to rethink human behavior.

"When you think of this, you shouldn't think of a car," Chin said. "You should think of it as a new personal and sustainable mobility system and service. This is a clean and green machine."

The stackable car project is an example of the type of thinking MIT is trying to encourage with a new initiative, launched last week, to coordinate more of the university's resources toward solving the world's future transportation problems.

"We really would like to create these living laboratories to try out some things we develop," Barnhart said.

A recent internal study revealed 26 percent of MIT faculty, across all departments, do work that is in some way linked to transportation. And many faculty members believe it will be one of the biggest challenges of the century. Yet much of their work is done in isolation. Putting stackable CityCars in a living urban environment, for example, would require work from information experts, traffic and urban planners, and specialists who develop models of where things should be placed to meet supply and demand.

Why rank transportation as a top challenge in a world of famine, war, and economic crisis? There are about 750 million cars or trucks on the road today. If the developing world continues to emulate America's dependence on automobiles, there could be 7.6 billion vehicles on the road by 2050.

Translate that in terms of traffic congestion, emissions, fuel consumption, and a host of other issues, and you get the idea.

"If everyone aspires to live the way we do, we're in a lot of trouble," said MIT aeronautics and astronomic engineer Ian Waitz, who led an MIT committee on the future transportation research. "You basically have to start with the very clear idea in your head that that is not something that we can really sustain."

Waitz said the research will focus on "accessibility," rather than "transportation."

Transportation means moving people and goods between point A and B. Accessibility considers "moving points A and B," he said. That involves changing cities and changing the needs of people to move around them in efficient ways.

Please send complaints or comments to starts@globe.com. Traffic advisories can be found at www.boston.com/starts.