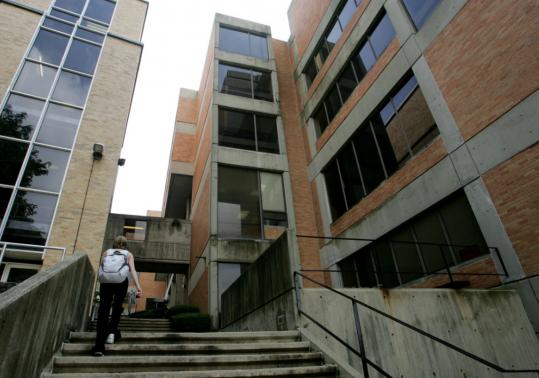 Fourteen months after officials closed the Salem State College library because of structural problems, the state is preparing to replace it.

Engineers decided that renovating the building would be too expensive, so state officials decided to construct a new library and have selected a site for it on the college's North Campus. The old library will be demolished.

As a first step, a consultant is preparing a design study to address issues related to the plan. Provided no major obstacles are found, design of the building will begin in March.

The existing four-story brick library on North Campus, which was constructed in 1969 but did not open until 1971 because of structural problems, was closed for safety reasons on Oct. 15, 2007, when engineers discovered structural flaws while examining the Lafayette Street building for a planned renovation.

"We certainly weren't looking to build a new library, but because of what happened with our old library, it worked out that way," said Salem State's executive vice president, Stanley Cahill. "This is an opportunity and a challenge to build a library for the future, a library that will be there the next 40 to 50 years if not longer."

The proposed location for the new library is set back from Lafayette Street south and west of Meyer Hall, an area that includes part of the existing library and a portion of an open green space and tennis courts.

Plans call for the 118,000- to 120,000-square-foot building to also house a Learning Commons, which would encompass the Honors Program, the Writing Center, the Academic Advising Center, the Office for Students with Disabilities, and the Learning Center, which administers such programs as tutoring and mentoring. The existing building also provided space for other services.

Plans for the new library come as the college, which has about 11,000 combined undergraduate, graduate, and continuing education students, is building for the future in other ways. Construction is set to begin in March on a new residence hall on Central Campus. The college also plans to renovate and expand its science labs in Meyer Hall.

The 2008 higher education capital bond law authorized $106 million for Salem State for the library and science lab projects and razing the old library. The initial earmark was for $90 million, but the amount was raised when the library project became more than a renovation, according to Andrew Soll, Salem State's vice president for finance and facilities.

"We are pleased that the project has gotten the funding through the bond bill, and we are at the study phase," said Martha McMahon, a spokeswoman for the state's Division of Capital Planning and Operations, the agency overseeing the project.

The state has released about $1 million of the bond to fund the library study and begin design. Planning has yet to begin on the science lab project.

Salem Mayor Kimberley L. Driscoll said that the college's preferred site for the new library is more toward the interior of the campus than the existing library's location, and as a result it will have less impact on residential homes.

Driscoll said that because the existing building is relatively large and close to a residential neighborhood, the city wants to be sure its demolition is done in a way that has little effect on nearby homes. College officials say they plan to ensure that occurs. No decision has been made yet on when the building will be razed.

The unanticipated need to close the library in 2007 caused significant disruption at the college, which had to scramble to find makeshift space for the library and other services that used the building. About 3,000 students used the 128,000-square-foot building daily, and about 90 staff members were based there, approximately 35 of whom worked in the library.

For the remainder of the school year, library staff operated out of various parts of campus, Cahill said. Librarians were allowed access to the closed library to collect books and other materials needed by students. Area public libraries assisted by providing their materials.

At the start of this school year last September, the college opened a temporary library in a previously mothballed Central Campus building that it renovated during the spring and summer.

The other college functions that had occupied the old library were also relocated and remain in temporary space. The Interdisciplinary Studies Department, for example, is now in the faculty dining area on the second floor of the dining commons. The honors program is now at the college's Enterprise Center.

Cahill praised the campus community for pulling together to help the college deal with the library closing.

"The cooperation was really fantastic and helped us survive that year where we were really in crisis," he said.

Tentative plans call for construction of the library to begin in 2010 and for the building to open in 2012.