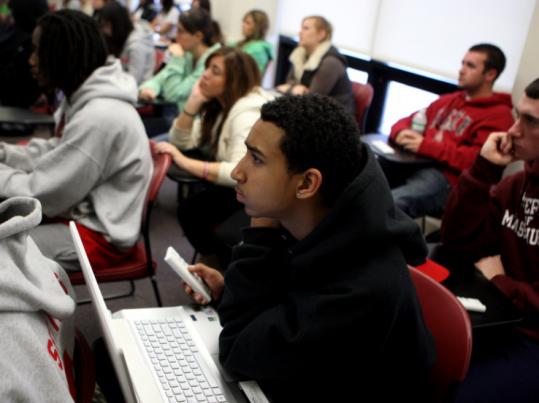 FRANKLIN - In a higher education world often fixated on prestige, Dean College cuts against the grain, carving its niche by catering largely to students with spotty academic records.

Marketing itself as a haven for students who struggled through high school, the primarily two-year college proudly embraces its reputation as a safety school and its commitment to students who need extra attention.

"What you see is what you get," said Paula M. Rooney, college president . "There are no pretenses. We know who we are, and we know where we fit. We aren't ashamed of it, and we don't try to hide it."

As political and education leaders grapple with ways to boost college graduation rates, particularly among below-average students, Dean's role carries a heightened importance. Through small classes and intensive advising and tutoring, the 1,100-student college sends more than 90 percent of its students on to four-year schools, although many arrive on campus decidedly unprepared.

Dean's college brochure candidly states: "Face it. Not everyone who graduates from high school is ready for a four-year college," and professors and administrators trumpet the "Dean Difference," a personalized education that gives mediocre high school students the help and confidence to succeed academically.

"They get a completely different level of academic support" than they did in high school or at a larger college, said Jay Leiendecker, vice president of enrollment services. "They don't have a chance to sit back and hide."

Jon Kielty, for instance, never thought he was cut out for college. High school was plenty hard enough. The next level, he was told, was for the smart children.

But after two years of grueling construction work, Kielty decided school was worth a second try. In Dean, he found a college that specializes in second chances.

"They make you realize that once you're here, you get a fresh start," Kielty said after a business survey course one recent morning. "You may not have done well in high school, but now that's behind you."

"They are a good match for kids who have the potential but just need a little support," said Jennifer Lisk, college counselor at Medway High School.

Although Dean is increasingly attracting stronger students, the college remains dedicated to students who, in Rooney's words, "need that little extra."

"Kids that fell through the cracks in high school," said Rooney, who became president in 1995. "Kids that just woke up. In many ways, I don't care where they come from."

At Dean, such students have access to an array of tutoring and advising programs tailored to personal needs and a faculty that works closely with advisers to keep students pointed in the right direction.

"About 90 percent do better here than they did in high school," said Wendy Adler, dean of academic support services. "We're taking students and finding what they are best at. It takes a campus to do the job."

With a price tag for the college close to $40,000, Dean's individual focus comes at a cost, and some educators quietly dismiss the college as an expensive stopover for wealthy, underachieving students. But Dean officials say that while 38 percent of students do not apply for need-based financial aid, the average assistance package is more than $12,000 a year.

Dean administrators said they believe the investment is worthwhile because many graduates wind up attending, and often graduating from, four-year colleges that would not have accepted them out of high school. Dean's retention and graduation rates also compare favorably to those of public community colleges, and students enjoy a more traditional college experience on the 100-acre residential campus, located 35 miles southwest of Boston.

"That's how we justify the cost," Rooney said. "We're taking students who have not enjoyed a great deal of success and telling them, 'You're capable of much more.' "

Founded as a preparatory high school in 1865, Dean has kept its mission essentially unchanged: preparing students for the rigors of postsecondary work, including many who assumed they were not college material.

Typical Dean students earned a high school GPA of 2.3 and scored between 800 and 1,000 (out of 1,600) on the math and critical reading sections of the Scholastic Aptitude Test. For the approximately 20 percent of the student body with a diagnosed learning disability, a yearlong program offers one-on-one tutoring and developmental classes in reading, writing, and math.

As a two-year private college, Dean is part of a dying breed, and Rooney said the college faces intermittent pressure to expand its four-year degree programs. While Dean has added bachelor's programs, including arts and entertainment management, 80 percent of students pursue two-year degrees.

Nationally, there are slightly more than 100 private two-year institutions, a number that has been steadily dwindling over the past three decades as public community colleges assumed control of the market.

"It's a matter of economics," said George Boggs, president of the American Association of Community Colleges. "It's much more viable to be a four-year institution."

On a recent Friday morning, students in Gerry Shaw's introductory business class listened to a lecture on marketing. With wireless clickers, students periodically voted on multiple-choice questions about their purchasing habits, a strategy to keep them engaged without overwhelming them, Shaw said.

Afterward, Tywan Lee, a 19-year-old freshman from Miami attending Dean on a football scholarship, said he liked the class because it covered contemporary, concrete ideas. Lee, who struggled in high school and was nervous about the demands of college classes, said Dean had put those fears to rest.

"Everyone knows your name, and when you go see them, they'll talk to you," he said.