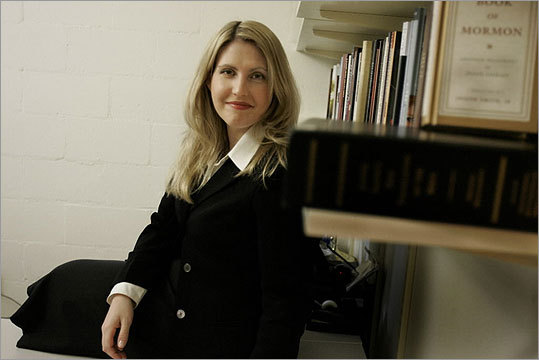 Harvard Divinity School has long prided itself on the diversity of its curriculum - it currently features classes in American Buddhism, Jewish Apocalypticism, and Classical Sufism - but it took until this semester for the venerable school to offer a course on one of the fastest-growing faiths in the world: Mormonism.

The decision by Harvard to add "Mormonism and the American Experience" reflects what appears to be an uptick of interest in Mormonism in higher education nationally.

There are more presses publishing academic works about Mormonism, more academic conferences on the religion, and more non-Mormon scholars studying the Church of Jesus Christ of Latter-day Saints, as Mormonism is formally known.

"The interest is growing in Mormon studies generally, and it's becoming something that other religious studies scholars have to take account of and pay greater attention to," said Melissa Proctor, a visiting lecturer teaching the new class at Harvard.

"Some people believe we have entered a golden age of sorts in Mormon studies," said Proctor, who grew up in the church and is working on a book about contemporary Mormon women.

Proctor noted that the future of Mormon studies at Harvard is unclear, and the dean of Harvard's divinity school, William A. Graham, said Proctor's willingness to teach about Mormonism was a plus, but that she was primarily invited to teach this year because of her expertise in other areas. She also teaches courses on ethics and gender.

"Mormonism does pop up occasionally in the Harvard curriculum, but usually as a part of American religious history courses rather than as a special topic for an entire course," Graham said by e-mail. "With so many major traditions of human religious history and life to try to cover, higher priorities usually come ahead of Mormonism, namely traditions such as Shinto or Confucian or Taoist traditions, for which we currently have no specialists on our faculty."

Whether or not Harvard continues to offer the class, scholars say a rising academic interest in Mormonism at universities nationally parallels the increasing visibility of Mormonism in American popular and political culture.

Most recently, the unsuccessful campaign of former Massachusetts governor Mitt Romney for the presidency brought renewed attention to the prevalence of negative attitudes toward Mormonism held by many Americans, but the faith has also been increasingly depicted, often critically, on stage and screen, ranging from Tony Kushner's Pulitzer Prize-winning drama "Angels in America" to the HBO series "Big Love" and last year's PBS documentary "The Mormons."

But scholars say there are more complex factors than the religion's recent visibility behind the rise of Mormon studies, including demographic shifts that have seen Mormons increasingly dispersed beyond the inland West, and academic changes that have included an expansion of interest among religion and theology departments in broadening their offerings.

"There's a lot of interest in new religions, and Mormonism isn't exactly new, but it isn't really old either," said Richard L. Bushman, a prominent scholar of Mormonism and a professor of history emeritus at Columbia University. Bushman is scheduled to become the new Mormon studies chair this fall at Claremont.

"The study of religion in America is going away from the mainline Protestant establishment, to try to reconstruct a religious tradition that's much more variegated and filled with dissent, and Mormonism gets caught up in that new range of interests," he said.

And Bushman said that persuading Mormon philanthropists to contribute to Mormon studies professorships at non-Mormon universities has been a challenge, in part because some potential donors fear the possibility that some of the scholarship they fund might be critical of their church.

But church officials, who have become considerably more aggressive about seeking to explain their faith since the 2002 Winter Olympics in Salt Lake City, say they welcome the academic research.

"We're certainly pleased with the level of interest - we know there will be some lumps we'll have to take along the way, but that's part of the process," said Elder W. Rolfe Kerr, the commissioner of church education who formerly served as the higher education commissioner in Utah. The church has a public affairs officer who is charged with assisting academics, and Kerr said the church is committed to cooperating with researchers.

"We want to remove the shroud of mystery or exclusiveness or restraint," he said. "We have shown a good deal more openness, and I think that's all for the good."

Scholars say one factor in the increase in Mormon studies is the rising number of Mormon children across the country, which has meant not enough openings for all of them at the church-run Brigham Young University, headquartered in Provo, Utah. The result is more Mormons attend non-Mormon universities, forcing those universities to reckon more directly with the 178-year-old faith, which today claims nearly 13 million adherents.

"I think it's safe to say that some combination of academic elitism and religious bigotry has delayed the development of Mormon studies," said Brian D. Birch, the director of the religious studies program at Utah Valley State College, which offers four courses in Mormon studies. "Some of this is due to the categorization of Mormonism as a cult and hence not worthy of serious attention. This is not surprising given the historical connection between American religious studies and Christian divinity and theological schools."

At Harvard, Proctor says her course, which will cover the basics of Mormon history, theology, culture, and sociology, has drawn a mix of Mormons and non-Mormons.

Proctor said she is uncertain where Mormon studies are heading. She has concerns, she said, about the possible "ghettoization" of scholars of Mormonism within academia. And, she said, among young Mormon scholars, "there is some residual concern from what has happened in recent memory," referring to the excommunications.

Students, at least at Harvard, appear to be interested. Proctor had to turn some away after enrollment reached the limit of 15.

"I'm interested in [Mormon] history as a very important part of American religious history - in a lot of ways representative of American religiosity, but also on the outskirts of it," said Max Mueller, a 28-year-old student in Proctor's class. Mueller, who described himself as a "loosely liberal Protestant," said he hopes to become a scholar of Mormonism.

"The scholarship is mostly done by insiders, and outsiders have only recently started to pay attention with something other than derision," he said. "There's some larger and overdue interest in Mormon scholarship done by outsiders, and I hope to be a part of that movement."