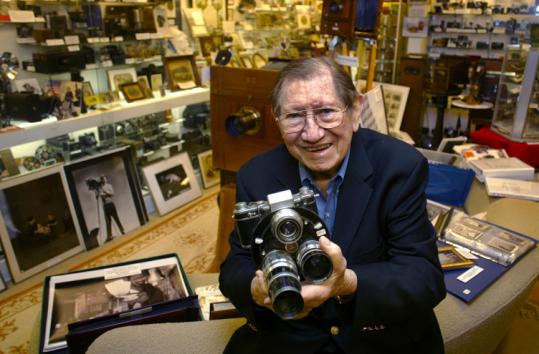 Thurman "Jack" Naylor, a World War II pilot and industrialist who invented an automotive thermostat that became the standard, parlayed his fortune into one of the greatest personal collections of cameras and photography in the world.

Mr. Naylor, 88, died in his sleep Monday at his home in Chestnut Hill. His 4,000 square-foot, climate-controlled basement once overflowed with 31,000 treasures ranging from rare daguerreotypes to tiny spy cameras to original images by Ansel Adams, Walker Evans, and Matthew Brady.

"His favorite thing - even more than getting the stuff - was taking people through the collection," said author and photo historian Martin W. Sandler. "He could show it three times in one day and someone could show up at 5 at night and he'd still say, 'Do you want to see the collection?' "

Mr. Naylor, who suffered from spinal cancer, died weeks after selling his favorite pieces at auction in New York for more than $2 million. Family members worried about his health, but Mr. Naylor insisted on attending.

"We all knew it was his last hurrah," said his daughter, Jan, of Laconia, N.H. "It wasn't so much the auction that gave him joy. It was the fact that a lot of people recognized him. He got all the kudos he deserved before he died."

Mr. Naylor had hoped to find a single buyer who would open the collection to the public. No one in his family wished to take over so he offered the entire lot for $20 million two years ago.

"He was very disappointed," Sandler said. "He came close. The problem was . . . anybody who got it had to have a place to put it."

He amassed much of the collection while working as chief executive of Standard-Thomson Corp., which was based in Waltham, for 25 years. He traveled frequently and sought items during his journeys as a way to relax, according to his family.

He obtained some of his spy cameras through meetings with a KGB agent during four Cold War-era trips to the Soviet Union. Mr. Naylor brought back tiny cameras once strapped to homing pigeons and cameras secreted in cigarette packs and masquerading as rings.

Born in Baltimore, Mr. Naylor was orphaned as a boy and brought up by his grandparents. He never spoke about the painful losses of his childhood, according to his daughter.

He earned a degree in economics from Fordham University in 1941 and became a B-24 pilot, conducting bombing runs in Eastern Europe. He took aerial pictures on his missions and became friends with famous photographer Margaret Bourke-White.

Mr. Naylor said White flew with "Captain Jack" because he always came back. She left some of her cameras to him when she died.

In 1951, Mr. Naylor used the GI Bill to earn a degree in mechanical engineering from Johns Hopkins University.

He had married Marguerite Rosalee Clark, a nurse, in 1942. The couple had three daughters. Clark died from heart failure in 1975.

Mr. Naylor cultivated friendships with photography pioneers in Boston, including Polaroid founder Edwin Land and Harold "Doc" Edgerton, an MIT professor who developed the use of strobe lights in photography. Mr. Naylor helped found the Photographic Resources Center at Boston University, which opened in 1976.

"He was instrumental in setting the direction for the PRC in the early years," said executive director Jim Fitz. "It's because of his vision the PRC is going forward today."

Mr. Naylor married again in 1981 after friends secretly set him up on a date in Boston with Enid Maslon Starr. Mr. Naylor and Starr thought they were joining others but found they were alone, according to daughter Jeanne Mahoney of Washington, D.C.

She described her father as a generous man who was a good listener. "He would not only give what we asked, he would give more," Mahoney said.

In addition to his daughters Jan Naylor and Mahoney, and his wife, Mr. Naylor leaves another daughter, Nancy Busby of Fairview, Texas; stepchildren Sandy Starr of Cambridge and Tony Starr, Julie Starr-Duker, and Dinny Starr, all of Newton; sister Lucille Terry of Baltimore; and 18 grandchildren.