Next stop: Forever After 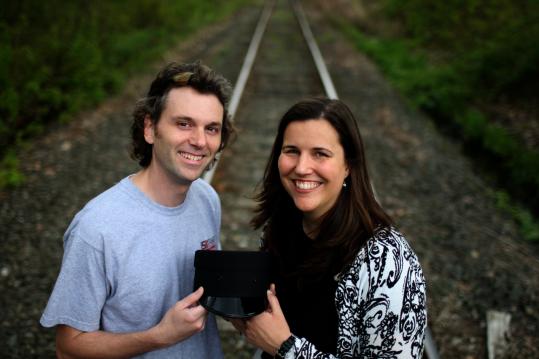 They're calling it The Love Train. Lauren Richey and Scott Miller will get married today at the spot where they met - in a car on the Framingham/Worcester Line of the Massachusetts Bay Commuter Railroad.

Richey, 36, and Miller, 40, will exchange vows on the inbound P556 between Southborough and Wellesley Farms as the train rolls along on its normal schedule. That gives the couple half an hour to get hitched. In Wellesley, the 100 guests will alight - quickly, so as not to hold up the train - and bagpipers and drummers will lead them to the reception nearby at the home of the groom's parents.

Five years ago, Richey noticed "Bike Man," as she called him, because he always had a fold-up bicycle on the train. He was mysterious: Sometimes he would already be on the train when Richey boarded in Ashland. Sometimes he would get on at a later stop. Did he have a girlfriend who lived in a different town? Was he a bike messenger?

Then there was The Blonde. "I'd also see a very pretty blonde getting on every morning, nicely dressed," says Richey, who is a veterinary pathologist. Richey, a brunette, loves short stories, so she wrote one about Bike Man and The Blonde.

Then, one day in May 2005, Bike Man, in his typical jeans and T-shirt, sat down right in front of her. Richey, dressed in business casual, tapped him on the shoulder. "Can I ask you a question? Why do you get on at different stops?"

Turned out he wasn't a bike messenger after all but a drummer who also works in the music technology division at Berklee College of Music, his alma mater. His parents live in Wellesley, and when his band practices late he stays overnight with them rather than return to his home in Southborough.

The next day, the seat next to Miller was empty. Richey took it. She told him about her short story titled "It's a Girl." Thus began conversations about everything from jobs to music, books and friends. Other train regulars would join in: BlackBerry Joe, Neck Pillow Guy, Boots Girl, Barbershop Dave. For an hour each weekday morning over the course of a year, the couple talked. Richey was going through a divorce and not looking. Miller had a girlfriend.

Still, Richey loved Miller's long, curly hair; he had a great smile and was cute, she thought. As for Miller, he loved her long, dark hair - so much for The Blonde - and expressive hazel eyes.

By 2007 her divorce was finalized and his relationship had ended. One day Miller brought her flowers on the train. They began dating, and a year ago he proposed in Acadia National Park in Maine. They live in his house in Southborough, still ride the train together - and still get on at different stops. She drives to the Ashland Station (which is more convenient to their home), while he bikes to the Southborough Station (because the route is better for cycling).

It just so happens that a freight train runs practically through their front yard, blasting its horn twice a day, which doesn't bother them a bit.

Since the train is a central character in their love story, the couple has gone off the rails with their wedding theme. Their invitation looks like a commuter rail ticket, the wedding program like a train schedule. Custom-made postage stamps bear an image of the silver and purple commuter train with their names on the side. The 4-year-old ring bearer will carry the rings tied with a ribbon onto a Charlie Card pass - and will be dressed like a conductor, hat and all. Two of the ushers are friends they met on the train: Class Ring Guy and Train Stephanie.

The Massachusetts Bay Commuter Railroad Co. was happy to accommodate the wedding - its first - and the couple bought prepaid tickets for everyone. "We loved the concept, and we liked their story," says Gillian Wood, chief of customer service for the line. "They were very, very easy and flexible to work with."

There will be no disruption to passenger service, and an agent will ride with the wedding party and make sure all decorations are removed, she says.

The normally dreary commuter car will be given a Cinderella makeover, thanks to three friends who will board at an early stop.

They'll drape the car with organza tulle, ivory ribbons and bows, and twinkly white lights. The advertisement billboards at each end will be covered with posters that look like train maps and tell the story of how the couple met. They'll hang a "Just Married" banner on an inside window.

At 3 p.m., groom and guests will board at Southborough. The bride and bridesmaids will get on at Ashland, five minutes later. Richey will wear an ivory gown and veil and will walk down the aisle, from the rear of the car to the front, to a friend singing the Journey tune "Don't Stop Believin'," which is about a couple who meet on a train. A minister will perform the service. In Wellesley the group will walk to the reception, where a bluegrass band - the Railroad House Band - will entertain.

Each table will float train-shaped balloons, and the centerpiece is a wooden train car with "Lauren and Scott, May 16, 2009" painted on one side. "MBTA Survival Kits" were handed out at the rehearsal dinner; they included coffee, handwipes, Sudoku puzzles, snacks, a book, and a train schedule.

The three-tier cake will be decorated with names of the three starring stations - Southborough, Ashland, and Wellesley Farms - with train tracks of the wedding route meandering around.

In lieu of gifts, Richey and Miller are asking guests to support their favorite nonprofit, 826 Boston, which helps students with creative writing skills. After all, they met in part because of a short story.

At the reception, their first dance as a married couple will be to the tune of "Last Train to Loveland," by Eddie Hinton. The song goes: "This is the last train to Loveland. I won't be coming back, I found a true lovin' woman, and we're moving on down the track. Tell the engineer, keep this train on time, I've got a lot of lovin' at the end of the line."