Couples find many ways to pare costs for the big day 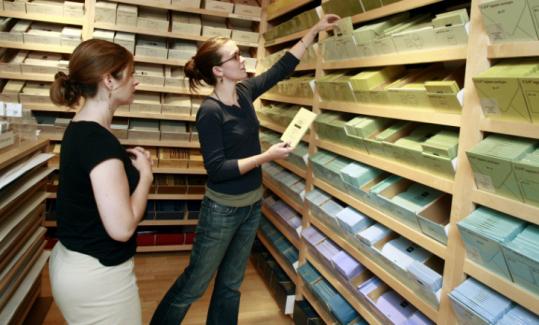 Like any other bride, Jamie Miller wants her wedding day to be perfect. Thanks to this sputtering economy, she's going to have to find "perfect" on the cheap.

This month Miller was at Paper Source in Wellesley finding materials so she can make her own wedding invitations. Miller and her fiance will also make their own table centerpieces and plan to host their wedding next year at their home in Bedford.

The price of gas and food has prompted special-occasion vendors to raise their rates, and Miller and fiance John Barry have less disposable income than they used to. When they got engaged in June, the couple made a pact to do as much as possible themselves for the wedding. "We have a mortgage," said Miller, 29, who works in the software industry and teaches yoga. "We're trying to repair our roof . . . If it was five years ago, I think we'd have an easier time finding resources. Just the state of things, banks aren't willing to help you out as much."

Couples planning their big days are finding that their budgets - whether hundreds of dollars or tens of thousands - won't stretch as far. The cost of the average American wedding is still $27,800 with 153 guests, but that $27,800 doesn't buy what it once did. Local brides and grooms have pared down guest lists, taken on creative tasks themselves, changed venues, and in some cases considered moving their wedding over state lines to save money.

Wedding planners say this means the trend of nuptial excess may be reversing. They say there's no shame in trying to do a wedding for less in this environment.

"They're getting laid off or their fiance is getting laid off, and they're looking for not a reduced quality of services but what they can get for less," said Magdalena Andreozzi, a Rhode Island wedding planner who calls herself "The Event Diva."

The economy has spawned what Andreozzi calls "panic brides." "They're either planning way in advance and hoping to get the 2008 prices for 2010 or they're waiting for the last minute and hoping the vendor will give them some low-ball deal."

Andreozzi said she's even had some Boston clients ask about out-of-state venues that may be less expensive to rent. "They're coming to Rhode Island where they can get 30 percent off that price."

Rebecca Dolgin, executive editor of TheKnot.com, said that on her site - which offers tips for brides, message boards, and wedding registry information - she sees more couples seeking ways to cut costs. Knot.com members, of which there are about 1 million, haven't necessarily cut their wedding budgets, but have found that it covers less than they hoped. Even if they're not cutting their budgets, they're scaling back and doing more themselves.

Seventy-five percent of Knot members who responded to a survey in March said they're concerned about the economy. Dolgin said that's why she sees more talk about winter weddings and Friday weddings on the website - anything to save.

"They're thinking about where that money is going," she said. "They're making different choices."

And, Dolgin said, there's less shame in going small as opposed to emulating a celebrity wedding. Some couples with no budget restrictions are using their money to make an affair look homier and small by doing weddings at home and on beaches, she said.

Boston City Clerk Rosaria Salerno said that could be why she's seen a significant increase in the number of marriages performed at City Hall over the past two years.

Kori Carter, a Cambridge wedding planner, said that over the past year she's seen clients make simple choices to curb spending. They opt for beer and wine instead of full bars and they're not ashamed to offer guests fewer food choices. Transportation from hotels for guests is no longer standard. Carter estimates that over the past year her clients have spent $120 less on each guest than they used to, down from $290 per person. She also said couples are extending engagements so they can spend for the wedding over time.

"Not that I want to say the romance is gone from it," she said, "but they're really having to look at the numbers."

Kelly Viana, a bride-to-be who is getting married at the Biltmore hotel in Providence, said that based on her research, limos and florists are the vendors that have most significantly upped their rates. That's why she's making her own bouquets.

Viana, 27, said she'd also consider selling her dress once she's done with it. She knows of many brides who pre-arrange the selling of their gowns on www.preownedweddingdresses.com, a site that offers used dresses for substantially less than the hundreds or thousands of dollars they originally sold for.

For Nick Panitsas, who married Suzanna Gill last weekend, saving meant developing new skills - as an electrician. To cut down on decorating costs, the 32-year-old ordered 100 inexpensive lanterns online from a retailer in China, constructed power sources with LED lights and batteries, and put them in each lantern so that Gill's parents' house in Hubbardston would glow. He learned to do it on his own, he said proudly.

Gill helped by settling on a dress from David's Bridal. It wasn't her first choice, but it was practical.

"The most important thing is that we're married at the end of the day," she said.