Sudden Impact
Rookie inside linebackers on the Patriots are supposed to spend their first year watching and learning. However, Jerod Mayo isn’t just an exception; he’s exceptional. Less than a year out of the University of Tennessee, he used his combination of speed and toughness to lead the team in tackles (including a team record 20 in one game) and was named NFL Defensive Rookie of the Year by the Associated Press. The Patriots lost many starters to injury this season, but in Mayo, they also gained a genuine star.
(AP Photo/Michael Dwyer/file) 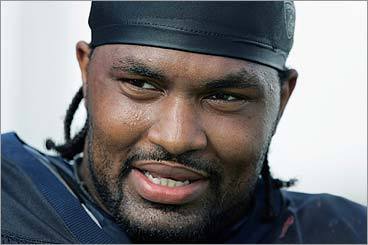