A Wizard at RISD
John Maeda may be the only college president in the country who’s cooler than most of his students. The well-connected former MIT professor, who became the 16th president of the Rhode Island School of Design in June, is a hightech humanist (his Twitter feed is a trickle of raw Zen) and a design guru – a walking mash-up. Maeda’s first moves toward his goal of an “open-source” campus include digital signboards scattered around to which anyone with an @RISD address can post words or pictures. He’s also curating a collaboration with online apparel store Threadless. And he’s just getting started.
(Victoria Arocho for The Boston Globe) 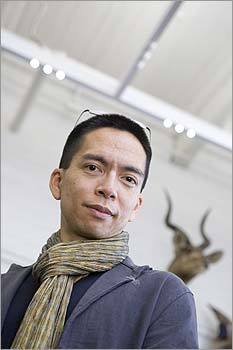