One Cool Customer
You could say Boston College goalie John Muse had a decent season as a freshman, especially considering he didn’t even expect to play. After star Cory Schneider turned pro two summers ago, Muse, from East Falmouth, ended up starting all 44 games from October 2007 to April and became an immovable force, leading the Eagles to an overtime win in the Beanpot, the Hockey East conference crown, and the national championship. Declared teammate Dan Bertram: “Everyone is going to know who John Muse is now.” No argument here.
(Wiqan Ang for The Boston Globe) 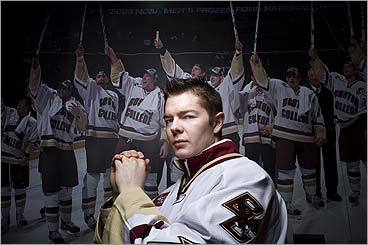