THIS STORY HAS BEEN FORMATTED FOR EASY PRINTING
Dinner With Cupid

Will these two academics end up professing their passion?

Who plays you in the movie of your life? The Woody Allen, Gary Cooper, Al Pacino tri-clone

What do people notice when they walk into your home? Oy. Books. Books. Pictures. Art. Books. And later, dust.

Name three things you couldn’t live without on a desert island: Music, chocolate, my dog Lucy

Who plays you in the movie of your life? Bette Davis

Melinda: I was thinking of wearing a dress, but it was snowing out, and I said, what the heck, go with the tight jeans.

Gordon: Before the date, I tried to put a crease in my pants and Googled directions. So I ended up leaving a bit late.

Melinda: I told a couple at the bar I was there for a Dinner With Cupid. My back was to the reception area, and they told me, “I’ll bet that’s him!” They were right.

Melinda: He was dressed simply: white shirt, dark sports jacket. And a ponytail!

Gordon: She said she thought a ponytail on a man was cute.

Melinda: He looked a little rumpled, but it was a snowy night, after all.

Gordon: Melinda revealed that she taught journalism at a Boston college, and my eyes popped a bit because I, too, teach writing at a Boston-area university. From there we fell into conversation that made me forget about the dinner.

Melinda: I don’t think either of us wanted to talk about work, but it was an obvious point of connection.

Gordon: I felt comfortable with Melinda. [There was] a spookily serendipitous string of correspondences. I asked if she’d seen the New Yorker piece on Saddam’s statue – she [had] just been reading it, producing the very article from her pocket. We were both Peace Corps volunteers – she in Jamaica, me in Korea. We both are Noam Chomsky fans.

Melinda: We also talked about music we liked. Him: folk-rock. Me: anything that makes me tap my toes.

Gordon: We both like African contemporary music, both know Taj Mahal, both think white audiences need to get up and shake it.

Melinda: When we sat next to each other for the photo, he put his hand on my waist – then thought better of it.

Gordon: I put my arm around her. (“Watch where you put that hand.”)

Melinda: We were at the restaurant for three hours, and I felt talked out.

Melinda: We exchanged phone numbers and each of us said we’d call.

Gordon: I was so rapt, I was surprised to find myself standing in the street, cold.

Melinda: [He gave me a] sweet little peck on the lips.

Gordon: I kissed her – was she surprised? The kid in me pronounced, aloud, “Oh, sweet!”

Melinda: We said we would. We’ll see.

Gordon: I said I hoped we might meet again. Lightning strikes but once with correspondences like these!

GO ON A BLIND DATE. We’ll pick up the tab. Fill out an application at boston.com/cupid. 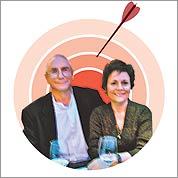 Read more from this issue.
Wintertime Survival Guide
Your comment is subject to the rules of our Posting Policy
This comment may appear on your public profile. Public Profile FAQ