An experiment in love

Will this biology grad student and her date evolve into a couple? 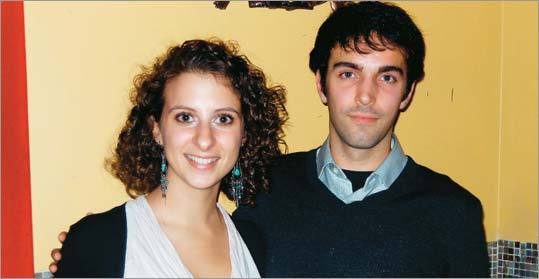 What makes her a good catch: She’s fiercely independent, intelligent, successful, and fluent in Spanish.

He’s happiest: On cold clear nights beneath lots of stars

Playing him in the movie of his life: George Clooney. “It’s not a conclusion based on resemblance, it’s a command.”

Nick: I had new roommates moving in, so I was waiting for them to arrive. They never showed up, so I left a bit late.

Florencia: I belted out Enrique Iglesias.

Nick: Luckily, I was too preoccupied by the roommates to worry about the date.

Florencia: I was just fine. There wasn’t much to be nervous about.

Nick: I came back from the bathroom and found her sitting in my booth.

Florencia: He was average-looking, but not really my type.

Nick: She was very attractive. She had this curly-haired Argentinean fierceness about her.

Florencia: I learned about what he does and what an English lit PhD entails.

Nick: I resorted to asking where she was from, which is about the least interesting first impression I could have made. But then she mentioned her county fair, and if there’s a surefire social lubricant, it’s memories of fried dough, tractor pulls, and tilt-a-whirls.

Florencia: We’re both grad students, but that’s about it for commonality.

Nick: I learned a lot about double-doughnut-shaped enzymes and her research investigating whether their funky gyrations are important or not.

Florencia: I stayed the same comfortable level as the date went on, but I’m usually comfortable with anyone.

Nick: Two martinis did a lot for my comfort, but our disciplinary differences were a stubborn obstacle. She couldn’t remember the last book she had read.

Florencia: Overall, the deal breaker was just that I didn’t think we were very romantically compatible. But there wasn’t anything that made me dislike him.

Nick: She was speaking for a long time about her research, and I thought I was bored. But at some point I realized that I actually quite admired her dedication.

Florencia: I realized he wasn’t quite a strong enough personality for me. I felt like I was overshadowing him a little.

Nick: After the meal, I asked her if she wanted to come to a birthday party I was heading to, but she politely declined.

Florencia: I had already said I’d hang out with some friends. I wasn’t particularly opposed to hanging out with him more, but I think we were pretty mutual in not having sparks.

Florencia: I think I might have given him the wrong number by accident. Sometimes I confuse my number with my parents’ number! I’d feel terrible if I did.

Nick: Probably not. She was very attractive and intelligent, but we don’t have enough in common to generate real conversation.

Florencia: I’d hang out with him. I enjoyed talking to him, but I don’t think I’d hang out in a date atmosphere.

Go on a blind date: We’ll pick up the tab. To apply for Dinner With Cupid, fill out an application at boston.com/cupid.