For better or worse

These couples are married and in business together. What the recession has taught them about their relationships. 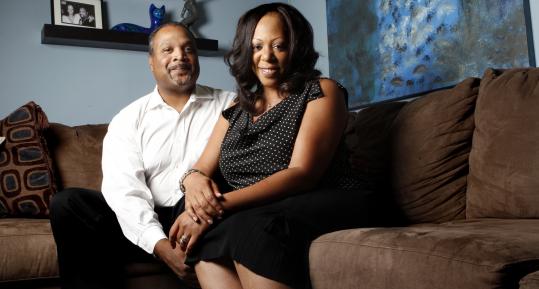 Derek and Alexis Brooks’s telecommunications business has struggled during the recession but the couple says their marriage is stronger for it. (Joanne Rathe/Globe Staff)
By Don Aucoin Globe Staff / June 26, 2010

They live together. They work together. They spend virtually every waking moment together. And when a historic recession hits with the force of a hurricane, they hold on to each other for dear life.

Married people who go into business with each other — called entrepreneurial couples or, less elegantly, “copreneurs’’ or “couplepreneurs’’ — choose to blend the personal and the professional, the homefront and the workplace, in a way that some find hard to fathom.

After all, they not only embrace a unique brand of 24/7 togetherness, but also live with a high degree of risk, given that all their eggs are in one basket, economically speaking. Yet some analysts say they may represent the wave of the future, because the Great Recession has vividly illustrated that the traditional workplace is no longer a sure thing.

In the spring of 2008, Derek and Alexis Brooks were dining with a business acquaintance in London when suddenly he launched into a sober lecture about the inevitability that their company would face tough times.

Puzzled, the Brookses looked at each other across the dinner table. Where was this gloom-and-doom coming from? After all, Inside Cable, Inc., the telecommunications infrastructure company they’d founded in 2001, was doing well, having reaped nearly $3 million in revenue in 2007.

Their dinner companion wrapped up his cloudy peroration with a silver lining: When bad times arrived, “at least the two of you have each other.’’

Over the next two years, those words would echo for them. First, the company was weakened by a delay in payment on a $2 million contract. Then, the recession began to take its toll, battering their business and forcing them to lay off all of their 15 employees. Before they knew it, their once-robust company was fighting for its life.

“We depended on each other to get through,’’ says Alexis, 47.

It’s always been that way. Their relationship began on an April night in 1993 when Alexis was battling despair because her mother had fallen into a coma. “I have no one in my life,’’ she remembers thinking then. “If only I had someone in my life I could lean on.’’ A few minutes later, the phone rang. It was Derek, whom she had met a year earlier in a Manhattan nightclub but had not seen since. Her mother came out of the coma the next day, and when Alexis got around to mentioning Derek, her mother said: “Go see him.’’ Two years later she was at their wedding.

It has evolved into a marriage with virtually no border between the professional and the personal. During the hardest periods, says Derek, 46, “I would come in and see her and automatically know why I was doing all that.’’

“Do we talk about business all the time? Yes,’’ admits Alexis. But, she adds, “We love working together. We have a blast. We can’t get enough of being together.’’ The secret may lie in the fact that they try to merge business with pleasure. If a meeting goes well, they celebrate. If they have a business trip, they build in what Alexis calls “us time.’’

Like a lot of entrepreneurial couples, they possess complementary skills. Derek, who has a law degree, likes to burrow relentlessly into the details of projects, while Alexis, who has a background in marketing and radio, likes to get quickly to the point. Yet each can anticipate what the other is thinking so precisely that in business meetings they sometimes fuse into a single personality. “We’re always finishing each other’s sentences, to the point that sometimes it gets on her nerves,’’ says Derek, to which Alexis adds: “Yes, it does. But we tag-team well.’’

As for their company, they’re close to signing a deal they expect will restore it to solid footing. And their marriage? They say it has been strengthened by the trials of the past two years.

MALCOLM AND EDNA BALL TerraMaids, Ashland In business together: 1 year

Two decades ago, when they were teenagers and did not yet know each other, Malcolm and Edna Ball left Brazil with their families and came to the United States.

One year ago, in the middle of a painful recession, they did something equally daring: They left secure jobs to start their own house-cleaning business.

In both cases, they did so for the same reason: to pursue a better life.

It’s not that they didn’t like their jobs. Malcolm, 36, was a teacher’s aide and an interpreter of Portuguese and Spanish at Keefe Technical School in Framingham. Edna, 38, counseled victims of domestic violence and sexual assault at a social-services agency.

But as the parents of two young children, they wanted more flexibility. Since they launched their environmentally friendly house-cleaning business, called TerraMaids, they’ve found it.

“We have more time with the kids,’’ Edna says. “This year I have been able to volunteer in the schools two days a week. All the field trips, I was able to be there with my daughter, and my son, too.’’ Adds Malcolm: “They feel strange when they see their friends’ parents working different jobs. They ask ‘Why are they doing that?’ They think we are the normal ones.’’

Yet beyond easing the always tenuous work-family balance, Edna sees another benefit to their business partnership: It serves as an extension of their marriage. “He is a great person to spend time with. He is my best friend,’’ she says. “Working together, having the same goals and objectives, being a partner: It goes beyond just being a business.’’

That’s not to say they haven’t felt pressure as the recession squeezed discretionary dollars out of many households. A few customers have stopped the cleaning service, while others have cut back from once every two weeks to once a month. They still have 22 customers, though (chiefly clustered in Wellesley, Newton, Brookline, and Weston), and with only one employee besides themselves, the workload can be heavy.

He checks work-related e-mail; she returns phone calls from clients. (Explains Malcolm: “Ninety percent of the time it’s a woman calling, so they feel more comfortable talking to a woman.’’) When they go out on jobs together, she’s more likely to focus on the kitchen and bathroom while he wields the vacuum and the mop. Edna speaks admiringly of Malcolm’s ability to notice the slightest speck in a seemingly clean room.

Malcolm says customers are surprised to learn they are married, sometimes asking: “How do you guys stand each other?’’ It doesn’t seem to be a problem. “We’re friends,’’ he says, adding with a smile: “We don’t get bored looking at each other.’’

When Lizzie Curran tells people that she works all day in an office just a few steps from her husband, Steve, the reactions tend to range from incredulity to . . . more incredulity.

Imagine their reaction if they knew that working together has been the norm for much of the Currans’ 20-year marriage — and even before. They tended bar together in an off-campus pub when they were first dating at Syracuse University. They comanaged product development at a video-game company in Miami from 1989 to 1995. They ran an interactive marketing company from 1995 to 1999.

Now, they jointly run Pod Digital Design, which creates online games, videos, websites and promotional campaigns for companies like , Entertainment, and the Game Show Network. It is a recession-era success that was born of failure during an earlier economic slump, and of Lizzie’s faith in their ability to work as a team.

In early 2002, a few years after they moved to Massachusetts, they took a break from working together. Lizzie was staying home with their two sons while Steve was a founding partner at a start-up. But the firm was faltering post-9/11, and he knew he needed to leave. The safer path would have been to find a salaried job at an ad agency, but Lizzie told him that they should start their own company.

In his recollection, she told him that “we had already managed to survive and be happy in a lean time, and since the economy was bound to improve, what did we have to lose? She said ‘I can help you when you need me, but it has to start with you, and I know you can do this.’ ’’

So he launched Pod Digital Design, and in 2004, Lizzie joined him. They’ve been running the company since, walking to the office each day from their house, which is only 500 yards away. The company’s revenues have grown steadily as marketers have sought digital alternatives to traditional advertising.

The company’s chief asset, though, may be the Currans’ unshakeable belief in each other. “A lot of businesses fail because their partners don’t trust each other. With us, there is complete trust,’’ says Lizzie. “If you can’t trust the most important person in your life, who can you trust?’’

Steve says facetiously that they abide by a strict rule: “No fighting in front of the kids.’’ He’s not talking about their teenage sons. He’s talking about not letting disagreements over who forgot to put away the laundry seep into the office, where the Currans supervise 10 employees.

OK, but what about that constant togetherness? “Obviously, it’s not for everybody,’’ Lizzie replies. “But seeing each other two hours a day, I find that really sad. And if he’s under stress, I know why that is.’’