THIS STORY HAS BEEN FORMATTED FOR EASY PRINTING
Voices

The myth of Ashton 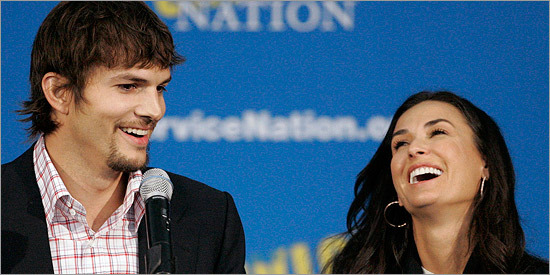 Maureen Trickett, an event organizer for 8minuteDating.com, had an idea based on all the hype surrounding younger men dating older women. She decided last year to plan an event specifically for that demographic - a night of speed dating for women-of-a-certain-age and the boyish men who love them.

Trickett posted the event online, and women quickly signed up. But the men - they were slow to show interest. After only six men registered, the event was canceled.

"I need eight men," Trickett explained. "If I don't get eight, the system cancels the event."

Trickett decided it was worth a second try. She set up another speed dating event for a recent Sunday afternoon at Tommy Doyle's in Kendall Square, this time for older women and younger men, as well as older men and younger women. The room would be split in half - age-inappropriate on both sides.

But again she had a shortage of younger men. The "cougar event," as Trickett was calling it, was canceled.

The older men/younger women event went on as planned, but only because Trickett waived the fee for a few women so that they'd sign up and the numbers would be even.

Despite what magazines and tabloids might suggest, Trickett said, despite all the talk of cougar culture, men still want to date younger women, and older women . . . well, their options are limited.

Sure, Demi Moore broke a mold, and I know a few couples - family members and friends of friends - who represent the highly publicized demographic of older women and younger men, but the dating industry will tell you that for the most part that demographic is a myth. Men still seek younger women, especially as those men get older themselves.

"It's the general rules, what happens when people hook up and go into a relationship," said Mark Brooks, an online dating industry consultant who runs Online Personals Watch. "With men dating women, it tends to be up to six years younger but it will only be up to two years older."

And why is that?

"Guys tend to have unrealistic expectations," said Brooks, who bragged that he is one of the mythical Ashton Kutcher-types (he recently dated someone nine years older than him). "Most men are too busy looking at magazines and not busy enough looking in the mirror."

HurryDate knows this. The company's local events almost always skew age-inappropriate to ensure a good male turnout. Upcoming HurryDate events (which like 8minuteDating have twosomes pair off to chat for a few minutes at a time), call for older men and slightly younger women. Tonight, for instance, there are two simultaneous events at Charley's on Newbury Street, one for 24-to-32-year-old men and 21-to-29-year-old women, and another for 35-to-45-year-old men and 30-to-40-year-old women.

"We have actually tried to capitalize on the cougar trend and it didn't really work for us," said Adele Testani, founder of HurryDate. "There really is so much in the media, but . . . people really want that more traditional arrangement."

Those HurryDate age ranges mirror what most men ask for online. I asked Kate Bilenki, a spokeswoman for Plentyoffish.com, a dating website with 10 million members, if she's ever seen a male profile call for an older woman. "In my experience, no, I can't say that I have," she said.

Bilenki adds another depressing tidbit: "For every 55-year old male, there are three 55-year-old women."

At the recent 8minuteDating party that had older men hunting for younger women, Trickett joked that she wished she could have hosted the party with the folks who were actually enthusiastic about signing up - the older women and the older men. Maybe they would have shown up, discovered that the younger daters were no-shows, and been forced to go on the speed dates with one another - people their own age.

"I'd love to do that with them all, just to see their faces," Trickett said.

Meredith Goldstein can be reached at mgoldstein@globe.com. You can read her daily Love Letters dispatch and chat with her every Wednesday at 1 p.m. at www.boston.com/loveletters.

Cougars spotted in Hollywood and on film