Renovations get a rethink 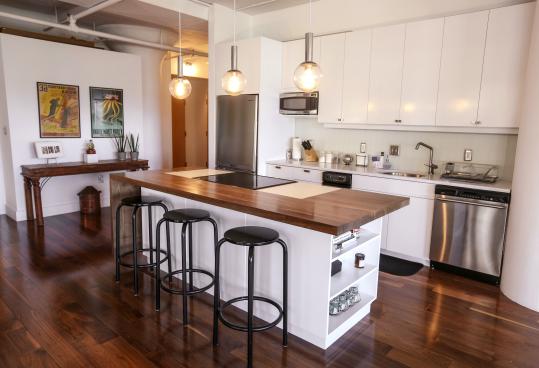 In this Leather District loft renovation, the ONY architecture firm kept to a modest budget while updating the kitchen and creating custom built-in cabinetry. (Aram Boghosian for The Boston Globe)
By Jaci Conry Globe Staff / May 24, 2012
Text size – +

After several lean years, the home remodeling industry is seeing an uptick. Thanks to the slowly stabilizing economy, a rise in home sales, and continued low interest rates, homeowners are dipping their toes into home renovation projects.

The National Association of Home Builders says that residential remodeling expenditures for owner-occupied improvements are growing nationally. Spending for 2011 topped $107.4 billion, up 3.5 percent from 2010, and an index of remodeling contractors’ confidence hit its highest level in five years in the last quarter of 2011, according to the NAHB.

But homeowners are spending more cautiously than they were before the economy crashed in 2008 and focusing on discretionary projects like kitchens and bathrooms, says Kermit Baker, a senior fellow at Harvard University’s Joint Center for Housing Studies.

“Between 2003 and 2008, there was a lot of upper-end activity,” Baker said. “People were doing expensive kitchen projects. What we hear now is that they’re not gutting everything, but picking and choosing aspects to update.”

That’s the case for contractor Charlie Allen, whose Cambridge-based firm, Charlie Allen Restorations, does a lot of kitchen and bath work. “We’ve got a lot of business now, but it’s very different working in this economy,” he said. “People are much more serious about the dollar figure they have to spend.”

Homeowners are looking at projects from a different vantage point these days: They are focused far more on function than form.

“If they have a kitchen that is dated and doesn’t work for their family, the focus is on ‘doesn’t work for the family,’ ” he said. “They aren’t looking for an opportunity to splurge or have fun with the kitchen, they simply want it to function well.”

Allen’s team recently overhauled a kitchen in a Cambridge Victorian that hadn’t been updated since the 1960s. The mechanical systems needed immediate attention, so the homeowners didn’t have a lot of money left to spend on the kitchen. But by making conservative choices, they were able to give the room a new, modern appeal.

“They didn’t get carried away with lighting or by adding pot fillers and those sort of bells and whistles,” he said. “They selected a lower-priced granite and simple natural maple cabinets.”

While they purchased a professional-grade range (the wife had been dreaming of one for years), the other appliances were economical, including a noncounter-depth refrigerator.

“Not buying a counter-depth refrigerator [which can costs thousands more than a standard size model] is a good thing to compromise on,” Allen said. “Down the road if you have more money, it’s something you can upgrade.”

When it comes to all appliances, homeowners are doing their homework, said Wendy Savino a designer with Metropolitan Cabinets of Norwood.

“It used to be that everyone was going for the high-end appliances, name-brand recognition, and status. Now, while people are still interested in good quality products, they are looking to do that for the least amount of money possible,” Savino said.

“There is a lot of back and forth with clients, they are much more aware of the options that are out there.”

The trend right now is toward less personalized cabinet finishes. White and off-white cabinetry, and lighter colors are more common than the once-pervasive cherry.

Nima Yadollahpour, of Boston’s ONY architecture, has landed more projects since January than he contracted for all of 2011 and feels encouraged by the way his business is trending. While he says clients seek out his firm because they are looking for interesting design, their decisions throughout the process are based on cost.

“Where things are purchased, what details are added, it’s all about price,” said Yadollahpour.

In a recent Leather District loft renovation, Yadollahpour’s firm kept to a modest budget while updating the kitchen and creating custom built-in cabinetry. Costs were kept lower in the kitchen by retaining the existing layout. Plumbing didn’t have to be moved. And the original cooktop was reused. A striking walnut top was created for the existing island, and three new pendant lights — a reasonable $75 each ­­— were hung above.

Rather than replacing the cabinets, Yadollahpour had them refaced. A minimalist glass tile backsplash was installed on the kitchen’s back wall, along with a Caesarstone counter. While the manufactured stone material isn’t inexpensive, Yadollahpour says it was an affordable decision because only a limited amount was needed. “We put on a new mask for a fraction of cost. It looks and feels like a new kitchen,” he said.

Doug Hanna, president of S + H Construction in Cambridge, says clients are more likely to adjust the scope of renovation work to meet their budget than vice versa.

“We’ll often price out a project for a client and they’ll come back and ask us to take certain things off the plan to bring down the price,” Hanna said.

In a West Newton kitchen remodel, for example, a peninsula was reduced in size to eliminate the cost of installing extra structural supports required for a larger version. While the renovation included new hardwood flooring, cabinetry, and granite counters, the existing appliances — save for the dishwasher — were reused.

Lately, Hanna’s firm, which does both modest renovations and custom-home building, has seen a lot of activity.

“We’re getting a much higher percentage of the jobs we’re bidding on than we were in the last couple of years,” he said. Hanna adds that he and his project managers are more vigilant about tracking budgets and keeping owners informed on every detail than they may have been pre-2008.

For those considering improvement projects, Allen recommends taking it on in phases.

“It doesn’t all have to be done at once, and these days it’s pretty tough to afford to do that,” he said. “We are probably never going to go back to the way things were before the recession. Was it good for my business back then? Yes. But it wasn’t good for the nation.”

Jaci Conry can be reached at jaci@jaciconry.com.

10 ways to add value to your home

Whether you're thinking about moving or just want to safeguard your pad, we turned to local experts to offer tips to add value to your home without breaking the bank.
Your comment is subject to the rules of our Posting Policy
This comment may appear on your public profile. Public Profile FAQ