Sparking instant backyard ambience by lighting up on cooler nights 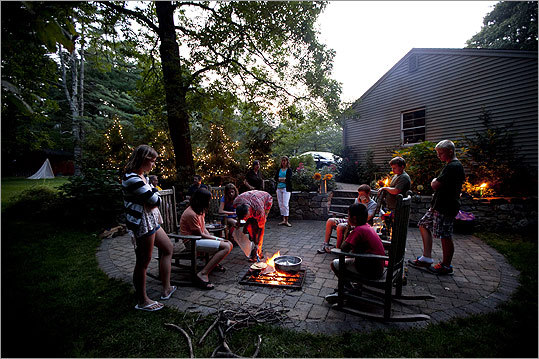 At Bob and Deb Sojka's home in Littleton, friends gather around the in-ground fire pit on their backyard patio. The Sojkas grill vegetables and cook all kinds of food -- from pancakes to pizza. (Yoon S. Byun/Globe Staff)
By Lisa Zwirn Globe Correspondent / August 31, 2011

NEEDHAM - Dave and Kara Borah light their fire pit - a simple copper bowl on a stand - and move deck chairs into the backyard. Some nights, more than a dozen friends gather around the fire. “It’s instant atmosphere,’’ says Kara. The couple’s children, Daniel, 11, and Isabelle, 9, love making s’mores. “When my brother gets his marshmallow on fire, he runs around the backyard like it’s a torch,’’ says Isabelle.

As warm days turn into cool nights, the hours we can spend outdoors are numbered. But that doesn’t mean we have to bundle up or come inside. We can stay warm - by the fire pit. Suburbanites, in particular, have discovered the joys of lighting a fire, sharing stories, toasting marshmallows, or preparing something more ambitious, and re-creating the atmosphere of a summer campfire.

Sales of fire pits have increased steadily over the last five years, according to Lowe’s spokeswoman Colleen Carbott, particularly those in the $79 to $129 range. One reason is their ease of use. “You buy one and put it outside,’’ says Josh Coutu, store manager of Natick Fireplace in Natick. “There’s no installation required.’’

The recession may also contribute to their popularity as people forgo expensive vacations and spend more time at home having friends over. Brooks Griffin, vice president of merchandising at Napa Style, a home products company founded by celebrity chef and TV host Michael Chiarello, says, “People tell me, ‘We traded other forms of entertainment for this form of entertaining.’ ’’

Fire pits are either portable or built into the ground, fueled with wood, propane, or gas. The allure for most people is hardwood, giving a pit the same draw as a rustic fireplace. You can purchase one off the shelf (or online) and or buy the materials to construct one. The simplest model is a large metal bowl that sits on a squat metal stand. The fire bowl, which holds the burning wood, can be shallow, or a deep tub or cauldron, or sunk into an attractive stone-topped table. Another vessel is a chiminea, originally from Mexico, that resembles an old-fashioned stove with a long-necked chimney.

The fire pit in the ground is just that: a large hole, generally 8-inches deep (or more) and 3-to-4-feet in diameter, which industrious homeowners can dig themselves and line with bricks or a steel fire ring insert. A short wall is typically built around the pit using stone blocks or concrete pavers to contain the fire. This style pit is rustic, extremely sturdy, and (fairly) permanent.

Standard fire pits are wood burning. Former scouts with wooded backyards will enjoy sawing downed trees and branches into logs, then splitting them with an ax. The rest of us can buy hardwood. Though pits can be fueled with propane gas or natural gas, those models cheat you out of the alluring natural smoky scent and dancing flames of hardwood. If it’s strictly heat you’re after - along with alacrity and low maintenance - gas pits are the answer.

Senneth Berrier, owner of Ace hardware stores in Acton, Stow, and Westford, says, “Most of our customers use a fire pit for ambience, like a campfire.’’ She has one, too. “We sit around it, have a beer and s’mores,’’ she says. “It’s a great communal thing.’’

Now the killjoy part: Anyone planning to use a fire pit should contact the local fire chief. Open burning, as regulated by the Massachusetts Department of Environmental Protection, is generally not allowed without a permit. And in 22 communities with dense populations, including Boston and Cambridge, open burning is prohibited. There is an exemption, however, for outdoor cooking. An outside fire conducted primarily for cooking purposes is allowed in all communities and is not subject to open burning limits. Dave Celino, chief fire warden for the Department of Conservation and Recreation, explains that local fire departments have jurisdiction over open air fires and will enforce the laws if a fire creates a hazard or nuisance.

Cooking over a fire has its rewards, including the imprint of aromatic wood smoke on the food. Even if it’s just roasting marshmallows, hot dogs, or sausages on a stick, cooking over a live fire offers an almost primitive sense of satisfaction. (And no pots to wash!) Foods such as potatoes, beets, meat, or fish can be wrapped in heavy-duty foil. Nestle these hobo packs in the glowing coals to cook. With a grid set over the fire, you’ve got a grill. Slide a cheese sandwich into a long-handled grill basket and you’ll have the truest “grilled cheese’’ you’ve ever eaten.

Bob Sojka of Littleton regularly cooks over the in-ground fire pit that he and his wife, Deb, installed about five years ago as part of a new patio. (Sojka, a lieutenant with the State Police, says it was a fire pit at a lodge at Disney’s Animal Kingdom that inspired theirs.) Lucky friends and neighbors have been treated to clambakes, steamers simmered in a pot with wine and shallots, grilled asparagus and pizza, as well as all kinds of foods cooked on a griddle, including bacon, pancakes, scrambled eggs, and home fries. He even pops popcorn in a large covered pot set on a rack over the fire.

Whether a fire pit brings out your inner caveman, camper, scout, cook, or storyteller, extending the good life outdoors is a worthy goal. After a few years of entertaining friends in the evenings, Kara Borah says, “Everyone likes to be around a fire.’’