Solair chairs, a ’70s staple on the East Coast, are available once more 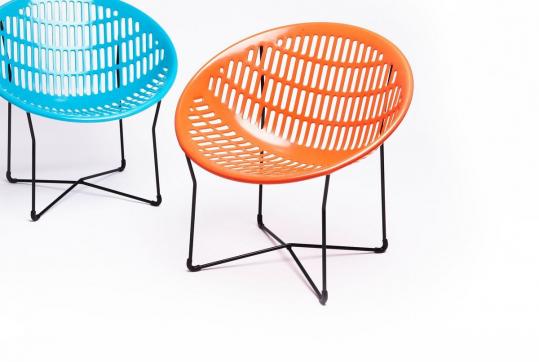 At one time, they were a fixture at nearly every roadside motel in New England. The space age plastic chairs, propped up on tubular steel hairpin legs, were the perfect combination of function and design. The capsule slots in the circular plastic seat allowed for dripping bathing suits to dry, while the chair itself was comfortable enough for a full afternoon of poolside lollygagging. Most important, it looked cool.

The chair, officially called the Solair, was conceived by Italian designers Fabio Fabiano and Michelange Panzini and went into production in 1972, a byproduct of Montreal’s bustling design scene after Expo 67. According to Kate Eisen, owner of the Toronto store INabstracto, the Montreal manufacturer would load up a truck with the chairs and travel to motels up and down the East Coast, selling them throughout the 1970s.

It was widely believed that the chair went out of production and was a lost relic of a bygone era. But Eisen and fellow Solair chair lover and art dealer Duncan Farnan found the company that made the chairs had simply changed names. The equipment was still in place to produce the chairs, and based on demand from midcentury design buffs, they are now in stores.

“Duncan and I brought them back. We’re now distributing them in Toronto, and we’re getting calls from North America and across Europe,’’ says Eisen. “They’re enjoying a nice resurgence.’’

The chairs are still manufactured in Quebec and can be purchased at Machine Age in Boston, or online at sites such as www.stardust.com. There are also new colors such as black, gray, and lime green, in addition to the original white, blue, yellow, and orange shades. Previously, the only place to purchase the chairs was on , Craigslist, or at the odd flea market and vintage shop.

“It’s really high design,’’ says Eisen. “There are a lot of architects and designers who have been looking for them.’’

The comeback of the Solair is not only bringing back fond memories of disco-era seaside vacations, it’s also helping to cut down on theft of the chairs, many of which still sit outside hotels across the United States and Canada.

“I’ve heard a lot of stories,’’ says Eisen. “People would wait until dark and then think about stealing them from in front of the hotels. That’s how much people love them.’’