What can three interiors pros do with such a limited budget? 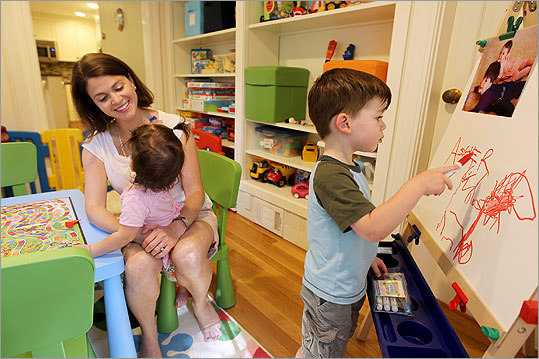 The playroom in Wellesley. (Jessey Dearing)
By Christie Matheson August 21, 2011

“You know you’re in trouble when your 1-year-old screams every time you leave her alone in a room surrounded by toys,” says Lorin Seidman, a publicist who lives in Wellesley with her husband and two children. Their playroom was a jumble – so much so that it wasn’t any fun. Interior designer Paige Polk’s first move was to divide it into two zones for the kids, moving the play table and chairs away from the wall and centering the set on a colorful new rug. “That created a perfect room divider,” explains Polk. Freeing up wall space allowed Polk to include an easel for Seidman’s 3-year-old son, Asher, which has been a huge hit. On the opposite side of the room, Polk created a “cooking nook” for 1-year-old daughter Romy.

Once the room was rearranged, Polk added inexpensive accessories: curtains for the windows (“I didn’t want them to make the room feel heavy, so they’re the same light color as the walls, and they’re short”), a small bookshelf, and a cheerfully mod lamp. For the walls, Polk blew up photographs of both children and matted and framed them. The Seidman kids enjoy the portraits and the space, and so does their mom. “I love it so much that I haven’t left the playroom all night,” she admitted one evening after the transformation. “My kids have been asleep for the past two hours, so I’ve been in there by myself.”

A double parlor in a 102-year-old Victorian certainly sounds elegant – but in reality its awkward floor plan can make family-friendly decorating difficult. Kim and Dave LaFontana and their two young girls, 5 and 3, were using the rear parlor in their Melrose home as a gathering spot for movies, dance performances, and games, and the front one for reading and piano practice. But the layout wasn’t working – a sectional couch blocked most of the archway between the rooms, Kim felt the TV was “too front and center,” and a pretty window was hidden behind toys and furniture. The decor wasn’t clicking, either. “In our other renovations, I’ve gone for a clean, classic look with modern amenities,” says Kim, a health care executive. In the Victorian, however, she wanted to be true to the old house and have rooms that looked like “they could be original from 1909, only better.”

Fixing the flow came first for interior redecorator Tess Jenkins, who removed the chaise section of the sofa and then moved the sofa into the front parlor, by the windows. In the rear parlor, she moved the “front and center” TV to a corner.

Next, Jenkins focused on colors and accessories. She found curtains for the front room – long ones, to add height – and removed the rugs, which were too dark and busy for the look the LaFontanas wanted. New shades updated lamps the family already owned, and bright pillows lightened the darker rear room, where Jenkins also painted the fireplace bricks pale gold. She created new displays of family photographs, grouping like frames with like frames.

“I can’t believe how transformed it is,” Kim says, “especially considering we used all of our existing furniture.”

Emily Nelson and her husband, Scott, live with their two young sons – and have a baby on the way – in a South End condo they’ve owned since before they were married. At less than 1,000 square feet, the space is tight, so rooms have to do double and triple service. But the office, which also serves as a toy room, kids’ reading retreat, and arts-and-crafts destination, had gotten so cluttered that they didn’t enjoy using it anymore.

That’s where professional organizer Heidi Solomon came in. She directed Emily, an investment manager, to sort through photos and her boys’ artwork – tasks that she had been putting off because she was unsure where she’d put everything when she was done. Filing boxes relieved the strain on drawers, and Solomon moved infrequently accessed papers and photos away from prime real estate. They designated places for mail, stationery, and everything else that was cluttering surfaces.

As for the boys’ gear, Solomon separated their books by genre (board books, sticker books, and so on) and put them into magazine files without front dividers, so the kids, who are 3 and 4, didn’t need to pull everything off the shelf to find what they were looking for. They put craft supplies into plastic bins instead of zip-lock bags. “They’re easy for kids to use and for adults to clean up,” Solomon says. To deal with new artwork, Emily and Solomon hung two magnetic boards, one for each boy to display his favorites. “If they know there’s a specific place for hanging artwork,” Solomon says, “they won’t expect Emily to cover every blank wall with it.”