THIS STORY HAS BEEN FORMATTED FOR EASY PRINTING
Style Watch

A window-deprived farmhouse in Concord gets a glassy makeover 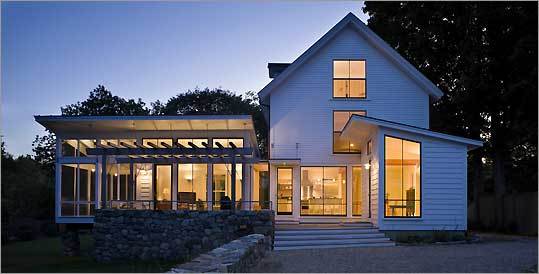 The house represented a fresh start. James Overall, a creative director in advertising, had gone through a divorce and was looking to make a new life with his second wife, Maurya Overall, who’s also in the ad business. Both had left the agency they worked at in New York for jobs in Boston, deciding to settle full time in Concord, where they could be near James’s young daughter.

It was also a fresh start for the house itself. “It had been very much disrespected in its journey over the years through many renovations,” Maurya says. “The additions that had been put on were not in keeping with the spirit of the house.”

The couple knew the place would need a lot of work. There was a bomb shelter that had to be filled, a derelict pool with chain-link fencing around it, and a 1950s kitchen. Worst of all, the only view out the rear of the 2,400-square-foot house was from the third-floor bathroom window. “It was completely closed in back,” Maurya recalls, though that’s the side of the house that faces the Great Meadows National Wildlife Refuge and the Concord River. Nevertheless, “it still had a little charm left,” she says of the structure’s core, a farmhouse built in 1863.

Because of the home’s location in one of the town’s historic districts, it took some time to agree on a plan for renovation. The Overalls spent two years drawing up plans with a local architect, but he “couldn’t get anything special that we really loved,” Maurya says. When they found Jim Estes of Estes/Twombly in Newport, Rhode Island, “we instantly knew his style was what we were looking for.”

Estes suggested opening up the farmhouse’s interior and adding large windows in the back. He also created two additions that were clearly separate from the original structure but connected to it by short glass-walled walkways. Despite what Estes calls a “heated debate,” the plan won approval from the Historic Districts Commission.

“We shifted the emphasis from front to back, so all the major spaces now open to the view,” Estes says. The separate areas are unified by a stone wall built by mason John Bordman, who lives two doors down and raised many of the walls in the area. The living room is in one of the additions, which is almost entirely glass on the water side; there are also large windows in the kitchen and the upstairs bedrooms in the farmhouse – all of which helped change the home’s interior from dark and dreary to bright and airy.

“The absolute highlight of the house is when you wake up in the morning and come down and see this amazing view,” Maurya says. “Both of us have fairly intensive jobs, so having that space to see all these plants in back and that nature coming in is very good for one’s head.”

A good start, every day.