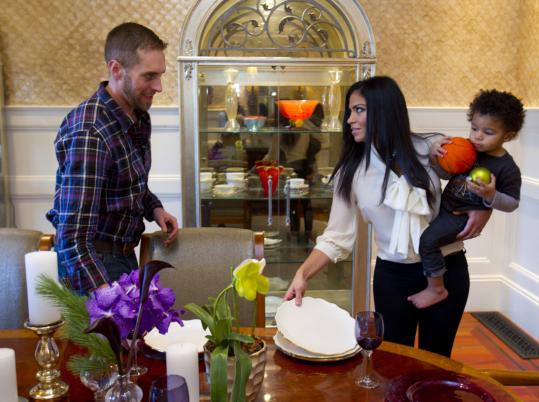 In the living room, a klatch of Celtic wives and girlfriends are lingering by Ray and Shannon Allen’s 12-foot Christmas tree. The Allen’s four children, ranging in age from toddler to teen, are either running out to practice, or looking for mom, who has been sequestered in the expansive dining room for a moment of quiet conversation. The quiet conversation is proving to be a challenge. Decorators from Winston Flowers are hanging a massive pine garland along the banister, and the occasional sound of a smashing ornament can be heard coming from the next room when the couple’s youngest child gets near the tree.

“Yes, my house is like Grand Central Station,’’ says Shannon, 36, who is casual about the chaos, especially around the holidays. “It’s always this way. We’ve got big families and there are always guests coming through.’’

The couple’s Wellesley home is slightly more chaotic on this particular afternoon because Shannon, looking preternaturally calm, is getting the large house ready for its close-up. Knowing a reporter is coming by to talk about holiday prep in the Allen household and a photographer will soon follow, the brood is particularly festive and well-groomed. The tree is perfectly coordinated with purple, pink, silver, and pale green ornaments. The dining room table is immaculately set, and could it be that the toys and games have been conveniently tucked away for the day?

For all the glimmer, glamour, and Elle Decor-ready setup, this couple is crazy about the holidays.

“We totally get into it,’’ Shannon says. “I don’t want to claim that I’m Mrs. Claus. But Ray is definitely Santa. We’re big into family. Normally we have 30 to 50 people for the holidays. When I was growing up in Connecticut, my grandmother’s line was ‘Add a little more water to the soup.’ ’’ She was always finding room for people who didn’t have a place to go for the holidays. She said there was always enough to go around, and Ray and I feel the same way.’’

The home decor reflects the Allens’ unpretentious attitude. There is no shortage of color — chartreuse, hot pink, and eggplant are used liberally in several rooms. One room features leather walls, another sports a leopard skin carpet. Shannon says the house reflects her husband’s personality. He loves color and wants a space that’s warm and welcoming — and he doesn’t want to sacrifice comfort. Virtually every room, even the kitchen, has places where the 6-foot, 5-inch guard can relax between games.

“I think it’s an extension of him,’’ his wife says. “In the same way that he cares about his clothing, and that he has his own personal sense of style, his home is really the largest expression of his personality. We both grew up in large families, so our goal is to have as many people in the house as we usually can. We want to have a relaxing, comfortable place to live, but it’s not over the top.’’

Any hopes that the Celtic wives and girlfriends could qualify for a reality TV show filled with backstabbing and squabbles are quickly extinguished as Shannon describes the close bond the group shares. The women regularly convene for dinner parties, movie nights, and even the occasional sleepover.

“You were hoping for stories of us fighting over Christian Louboutins at Neiman Marcus?’’ Shannon asks with a grin. “We’re each other’s families. There’s no way we can manufacture that. They’re on the road 41 games out of the year, and we all have young children. We’re sisters.’’

The Allens moved into their Wellesley home almost four years ago, after Shannon looked at nearly 100 houses over a two-month period, settling on new construction on a quiet street. Decorating the house for the holidays is a major undertaking, which the family usually manages unassisted. This year, Allen called in Winston Flowers, whom she has regularly hired after using them for her wedding. Ryan Zoeller, special events designer from Winston, is in the living room decorating the tree with hot pink and purple.

“They’re definitely not afraid of color,’’ he says. “But you shouldn’t be afraid of going beyond green and red at the holidays.’’

“I would never leave out my kids’ favorites just because its doesn’t fit with the decor,’’ she says. “In fact, it’s way too pristine right now. When you leave, I’m going to run upstairs and get all of the homemade ornaments. All the orange reindeer and the ornaments we’ve made. The Yoda stocking may not match the color scheme, but it’s just as important as everything else.’’

Christopher Muther can be reached at muther@globe.com. Follow him at www.twitter.com/globemuther.