THIS STORY HAS BEEN FORMATTED FOR EASY PRINTING
Your Home: Do-It-Yourself 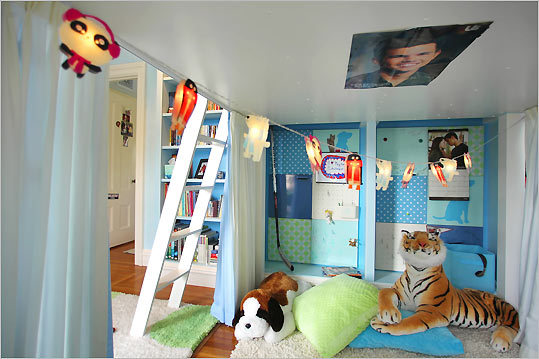 Under the custom-made elevated bed in this room designed by Andra Birkerts is a distinct area for lounging -- sure to win any teenage girl's heart. (John Tlumacki / Globe Staff)
By Marni Elyse Katz October 24, 2010

Beyond Pink and Blue West Roxbury interior designer Rachel Reider, who dreamed up this nursery for her daughter (facing page), recommends decorating with customizable and three-dimensional elements. Vinyl wall graphics are inexpensive and can be arranged to fit the space exactly. Everyday objects – anything from pennants to tree branches – hung on the wall can provide stimulating dimension and texture. Reider says her daughter is mesmerized by the butterflies by Almost Sunday that she found on Etsy, a great source for original, affordable art.

Don’t be afraid to push the envelope in terms of color, with brighter and bolder hues and offbeat combinations, Reider advises. The purple, brown, and orange scheme in her daughter’s room is a departure from the stereotypical pink or blue. It’s girly enough, but feels fresh rather than cloying.

Opting for materials that don’t require much upkeep is also a smart move for a child’s room, says Reider. The glider is upholstered in easy-to-clean Ultrasuede. The carpet tiles, by Flor, are not only fun to mix and match, they’re durable and easily swapped out in case of staining. Reider recommends choosing furniture that will remain useful as your baby grows or that can be easily re-appropriated. This glider is ideal for feeding infants, but when baby becomes a toddler, it’s the perfect spot for a parent to perch during story time. Later, kids can curl up with a book on their own. The crib’s simple lines and dark color make it easy to use for baby number two, regardless of gender.

Long Live the Theme Interior designer Andra Birkerts says she strives to create spaces that have a design scheme but leave enough leeway for kids to imprint the room with their own style. In this then 11-year-old girl’s room in Cambridge that Birkerts designed, the palette and theme are clear, but empty walls and shelves offer opportunity for a child’s touches.

Establish a theme with longevity, the Wellesley-based Birkerts advises. For this room, she says, they went with a graphic motif – polka dots – based on a sheet pattern the girl adored. But don’t go overboard, Birkerts says. “It’s clear what we’re doing, but we didn’t push the dot thing too much.”

While some of the paper lanterns indeed cover light bulbs, others are purely decorative, Birkerts says. “You can add and subtract lanterns in different colors and sizes and hang them at different heights. They’re very versatile, not to mention inexpensive.”

The loft bed pictured is custom made, but retailers like IKEA also offer loft-style options. By elevating the bed, Birkerts had space to create a distinct area for lounging, key for kids when friends visit. Lights that clip onto the back of the bed can be repositioned. “Kids like to move stuff around and change sides of the bed,” Birkerts says.

Toys in the Attic Involve teens in the design process. That’s the lesson Boston-based Andrew Terrat of Terrat Elms learned when he designed this room for the teenage son of a client in Wayland. To his surprise, the boy and his two sisters, whose rooms Terrat also designed, were really interested. They sent him links to pieces they liked, having shopped it all online. The PB Teen Vintage Camo Quilt was one of the client’s son’s finds, as was a set of skateboard shelves.

The boy’s bedroom is an entire attic floor and includes an en suite bathroom. “It’s like an apartment for a 15-year-old,” Terrat says. If you have the space, you can echo the layout of a studio or loft, as Terrat did, by splitting up the room into distinct zones. There’s an area with a desk for doing homework, two beds (one of them for sleepovers) with throw pillows for hanging out, as well as a TV and video-game area.

There’s also a wide-open space where the teen can work on his project of the moment. “It’s important to leave room for new interests,” Terrat says. Not long after the room was complete, its young occupant set up a tent to prepare for an upcoming camping trip. He recently added an electronic drum set.

Terrat played into the teen’s main pastime when creating the room’s focal point: the gaming area. The specialized gaming chairs rock, vibrate, and have speakers built into the headrests, helping players feel as if they’re really in on the action. The soda-can pillows were chosen as much for the feel as the design. “They’re like beanbags,” Terrat says. “They feel creepy to touch, but kids love them because they mold to their heads.”

Marni Elyse Katz is a regular contributor to the Globe Magazine and blogs about design at stylecarrot.com. Send comments to magazine@globe.com.

Inside some stylish kids' rooms