The Cape is more than sand dunes, seafood, and sailboats. Some of its most beautiful homes are open to the public. 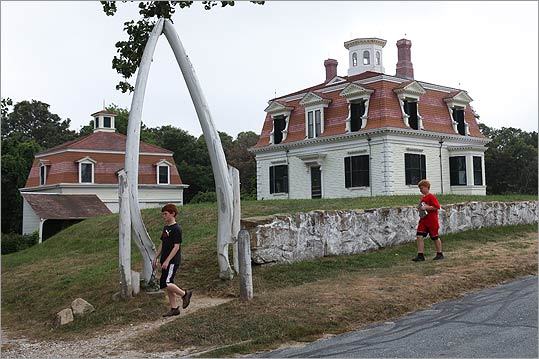 Cape Cod conjures images of sand dunes and beach grass, bustling harbors, seafood dinners, and sunsets on the water. The area’s architecture, however, is seldom given a second thought, save for those weathered 1 1/2-story cottages — coined the Cape Cod style — that the earliest settlers built.

Yet the Cape has a rich architectural heritage. The houses that line the thoroughfares and back roads are diverse and intriguing, encompassing a range of styles that represent several different eras. There are gracious 18th-century Georgians, stately Greek Revivals, and fanciful French Second Empires built by 19th-century sea captains, along with opulent manses constructed during the Gilded Age and sparse, Mid-century Modern masterpieces meant to merge with the landscape.

Many such houses are open to the public, offering an opportunity to get a glimpse of the past. To venture on your own historic house hunt, let this be your guide.

Set atop the town’s highest hill, this estate sprawled on nearly 700 acres when it was built in 1878 by the sons of James Beebe, a wealthy Boston dry goods manufacturer. A rare example of Stick style architecture assimilated with Queen Anne, the lavish 22-room mansion includes 16 fireplaces with majolica tile surrounds, stained glass windows, and hand-carved woodwork. The Beebes, who accounted for over 25 percent of the town’s tax base, were great entertainers and the house contains an elaborate ballroom and one of the earliest billiard rooms. During their heyday, the family opened Highfield’s grounds — which consisted of miles of carriage and bridle trails — to the public on Tuesdays. After the Beebes, the house fell victim to poor renovations, neglect, and was narrowly rescued from demolition. It has since been meticulously restored and is open to the public, along with the surrounding wooded trails known as Beebe Woods. Open Monday-Friday, 10 a.m.-4 p.m.; Sunday, 10 a.m.-1 p.m. 508-495-1878.

Presumably the oldest house on Cape Cod, this saltbox with diamond pane windows and broad interior planking was built around 1670 for the town’s second minister, the Rev. John Smith, his wife, and their 13 children. Named for Abraham Hoxie, a whaling captain who bought it in the 1850s, occupants lived in the house without electricity, plumbing, or central heat until the 1950s when the town acquired it. Guides present historical information in an amusing way and furnishings in the authentically restored house reflect life in the Colonial period, along with antique textile machines and some pieces on loan from the Museum of Fine Arts. Open Monday-Saturday, 10 a.m.-5 p.m.; Sunday, 1-5 p.m. 508-888-1173.

ATWOOD HOUSE
347 Stage Harbor Road, Chatham Built by the Atwood family in 1752 and given to the Chatham Historical Society in the 1920s, this gray-shingled Cape Cod is charming in its simplicity. Today, rooms are furnished to reflect the 18th and 19th centuries — in addition to an intact keeping room, borning room, and parlor, the house has a large open attic with a finished bedroom and fireplace, a rarity of the era. A newer kitchen, built in 1833, includes a cast-iron stove. Among the artifacts showcased is a maritime gallery of sea captains’ portraits and nautical instruments, an extensive collection of period clothing, and a permanent exhibit highlighting the commercial fishing industry. This summer features a special exhibit, “From Chatham to China,’’ on 19th-century trade between Cape Cod and the Orient. Open Tuesday-Saturday, 10 a.m.-4 p.m. 508-945-2493.
CROSBY MANSION
Crosby Lane, Brewster To please his blushing, much-younger bride, liquor and tea magnate Alfred Crosby had this Queen Anne mansion built in 1887 on the site of his boyhood home. Featuring complex gables, dormers, and clustered chimneys, the grand residence was surmounted by a 60-foot tower with an inspiring view of Cape Cod Bay. Inside, paneling was made out of Indian mahogany, walls were finished in gold leaf, and a sweeping spiral staircase connected the three levels. For the detail and ornamental work, Crosby hired the most skilled craftsmen; to transport workers, the Old Colony Railroad laid track to the construction site. Crosby’s wife entertained lavishly, and when parties became too much for him, he fled through a hallway into the 1832 Cape Cod-style house he grew up in, which he’d had incorporated into the mansion. After a multi-year restoration, the house reflects its original grandeur. Open the first and third Sunday, 10 a.m.-3 p.m. 508-240-2338.
KUGEL GIPS HOUSE
Wellfleet A recently restored specimen of the Mid-century Modernist architecture, the house was designed by prolific modern architect Charles Zehnder. Conceived with sustainability, economy, and reverence to the landscape in mind, the flat-roofed house is located on a hill in a sparse forest overlooking a serene pond. The structure combines wood with concrete and glass; exterior materials such as clapboards are used indoors. Long cantilevered decks and an overhanging roof project the living space into the landscape. The house now reflects its original condition right down to the doorknobs and hinges and is used as a place to educate on the Cape’s Modernist architecture. Tours may be arranged by the Cape Cod Modern House Trust. The house will be part of a modern house tour on Sunday; for details visit www.ccmht.com. 508-349-3022.
CAPTAIN BANGS HALLET HOUSE
11 Strawberry Lane, Yarmouthport In the kitchen of this Greek Revival, you’ll see a brick beehive oven that was part of the original 1740 structure, but the rest of the house was almost entirely rebuilt a century later. Named for Hallet, the sea captain who lived here from 1863 to 1893, it was considered less stately than other captains’ homes at the time. But the three-level structure, with its Doric-column front porch, seems plenty impressive now. The rooms are adorned in 19th-century style. Furnishings include a Chinese lacquer sewing stand, a Hepplewhite sofa, and Hitchcock chairs. Relics include a leather-bound chest at the foot of the master bedroom’s canopy bed, belonging to Hallet’s wife, Anna. Open Thursday-Sunday, 1-3 p.m. 508-362-3021.
JULIA WOOD HOUSE
65 Palmer Ave., Falmouth Located across from the town’s bucolic village green where the Colonial militia trained, this Georgian-style home was once the most gracious in town. Built in 1794 for Dr. Francis Wicks, a leading American pioneer in the use of smallpox vaccines, the home features a hip roof, twin chimneys, a two-story porch, and a widow’s walk (rooftop platforms initially built for sea captains’ wives, who would scan the horizon for their husbands’ ships). Restored and run by the Falmouth Historical Society as a museum, the house features an 18th-century doctor’s office, and both an interior and outdoor summer kitchen. Next door is another 18th-century residence, the Conant House, where period furnishings, china, toys, tools, and handmade quilts are displayed. Open Tuesday-Friday, 10 a.m.-4 p.m., Saturdays 10 a.m.-1 p.m. 508-548-4857.
WINSLOW CROCKER HOUSE
250 Main St. (Route 6A), Yarmouth Port

A wealthy trader rumored to be a rum runner, Winslow Crocker built this Georgian-style home in 1780. With its classic Colonial 12-over-12 pane windows and symmetrical floor plan, the house features embellishments including a common room with a hinged wall that can be lowered to create two smaller rooms. When Crocker died his two sons inherited the house, and they divided it vertically, even splitting rooms and fireplaces in the process. The house was originally constructed in West Barnstable, but in 1936 philanthropist and collector Mary Thatcher had it taken apart, beam-by-beam, and reassembled in its current location. Thatcher furnished it with her sizable collection of antiques, including Jacobean, Queen Anne, and Chippendale pieces. The house has been owned by Historic New England since the 1950s, and Thatcher’s furniture, accented by colorful hooked rugs, ceramics, and pewter, is on display. Open the second and fourth Saturdays of each month till Oct. 15, 11 a.m.-4 p.m. 617-227-3956.

CAPTAIN EDWARD PENNIMAN HOUSE
Fort Hill Road, Eastham Thirteen-foot-tall whale jawbones —considered a sign of good luck in 1868 — mark the entrance to this French Second Empire home. As a testament to his accumulating fortune, whaling captain Edward Penniman spared no expense constructing a home for his family on a cliff overlooking the Atlantic. Complete with a tower on the mansard roof, yellow clapboards, red roof shingles, and double hung sash windows with arched tops, the structure stood far apart from surrounding residences and was the first in the area to have running hot water, electric lights, and an oil-fired hot-air furnace. The decor — European paintings, Arctic bear robes, oriental rugs — was collected on Penniman’s far-flung voyages. The home’s woodwork, finishes, and wall coverings have been preserved and items on display include Penniman’s diaries and navigational tools. Open Tuesday-Thursday, 1-4 p.m. 508-255-3421.

Take a look inside a few gorgeous, historic Cape homes open to the public.
Your comment is subject to the rules of our Posting Policy
This comment may appear on your public profile. Public Profile FAQ