John Derian has built a design empire with homegoods that carry the patina of flea-market finds. It’s a look that works in his 1789 Cape Cod home, as well. 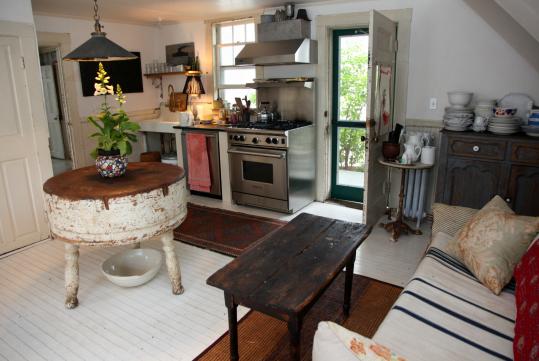 A 19th-century butcher block table functions as an island work station in the kitchen; a giant porcelain lab bowl resides underneath. Hanging above is a Robert Ogden mirror shade made by Mennonites in Pennsylvania. A school table sits in front of a 19th-century sofa covered in antique grain sacks. (Julia Cumes for the Boston Globe)
By Christopher Muther Globe Staff / July 1, 2010

PROVINCETOWN — This is a love story about a man and his house. Despite the fog and rain that gray day nearly four years ago, designer John Derian was head over heels when he first laid eyes on the crumbling 1789 sea captain’s house on Commercial Street. To most people, the house — with a compromised foundation, room after room of curling wallpaper, and antiquated fixtures — would shriek “money pit.’’

“I hadn’t even planned to be here that day,’’ he said recently on a flawlessly sunny and warm afternoon. “But we came over for the day from Nantucket. I wasn’t even looking to buy a place. But I had a feeling about this one.’’

A Watertown native who left Boston for New York in the 1990s, Derian has built a design empire creating homegoods and art that have the patina of vintage castoffs. Dubbed the King of Decoupage, Derian, 47, sells his products to more than 500 stores around the world and has designed a line of housewares for Target. His product lines — ranging from plates that look like they could have been found next to rusting birdcages at a Paris flea market, to furniture that appears to have pulled from crumbling grand mansions — has a very similar aesthetic to the Cape Cod summer home.

Derian has now reached the semi-enviable stage where his products are so popular, they’re getting knocked-off.

“He’s an incredibly talented guy, so it’s not surprising there are knock-offs,’’ says Joanne Rossman, a longtime friend of Derian’s who carries his products at her eponymous Roslindale Village shop. “But I’ve decided John’s success is due to the fact that he’s the whole package. He’s charming, he’s extraordinarily talented, he’s engaging, he’s bright, and he’s a wicked Scrabble player.’’

Rossman was among the first group of guests to be invited to Derian’s Provincetown home for Easter three years ago (he lives full-time in New York, and visits Provincetown twice a month). She had counseled him against purchasing the property, but balancing a plate on her lap for that first meal among Derian’s friends, she realized that the home was a perfect fit for the designer.

He has left many shards of the original wallpaper, which cling stubbornly to the horse hair and seashell plaster walls after 80 years, but he has updated what’s behind those walls. The wiring and the plumbing are all new, the chimneys were completely rebuilt, and the kitchen has been updated with new appliances. But otherwise, the seven-bedroom house is an ideal reflection of the designer’s gorgeously aged aesthetic. It is filled with furnishings he found at flea markets, which sit comfortably beside chairs and sofas he designed for his recently launched furniture line.

“I was going to change this room,’’ Derian says as he walks through a sitting room covered in ancient floral wallpaper and a purple, splattered paint effect on the floor. “But I decided to leave it. The yellow walls and purple floor kind of work. And I’m not the one who did it, so I can’t be blamed for it.’’

In the back of the house, in a garage that was originally built to store the “horseless carriage,’’ Derian has opened a 350-square-foot retail store that is a miniature version of his two New York City boutiques.

After touring the home, Derian fills a pitcher with water and lemons, brings out a bowl of cherries, and settles his lanky frame into a sofa to talk about his Watertown childhood. He confesses that he didn’t grow up with dreams of decoupage — which, by the way, is the art of creating collages out of paper cut-outs and then sealing them with coats of varnish. Rather, Derian was the kid in class who was always staring out the window, daydreaming the hours away.

“I always had a crazy imagination,’’ he says. “I never understood school, and I never did well. I remember as an adult finding a report card from a teacher who I loved when I was a kid. All of my grades were bad, and I got these messages like ‘He doesn’t pay attention.’ And that was my favorite teacher! The things I focused on most were drawing, playing ‘Josie and the Pussycats,’ and making things. My parents basically thought I was a freak.’’

The youngest of eight children of Armenian and Scottish heritage, Derian was focused on art and acting throughout school. At one point he majored in theater at Salem State College. But Derian dropped out after a semester. He drifted around professions and schools as a young man, finally landing a job at the Newbury Street interior design shop La Ruche in the 1980s. While there, he started experimenting with selling his creations, such as wreaths. At the same time, he discovered antiques through a man he was dating. It was an appreciation that began when his sister took him to the massive Brimfield Antiques Fair when Derian was a teenager.

“People started buying and collecting what I was making,’’ says Derian of the pieces he sold at La Ruche. “I definitely have a 19th century thing going on. In all the picking and antiquing I did, I always gravitated toward a certain period, I just started collecting all the printed matter, and I was fascinated by the beauty of it and the idea that there’s all this stuff hidden in these books.’’

He was still working three jobs when he came up with the iconic plates that would become his trademark. By the early 1990s, he was successful enough to move to New York and start his business in earnest. He modestly makes the series of events that led to his purchase of the house sound like a bit of a haphazard accident. He now has a staff of two dozen working for him, and is regularly featured in publications such as Martha Stewart Living and Elle Decor.

“Seriously,’’ he says with an expression that’s anything but serious. “I’m just a guy who is drawn to these antique things. Fortunately, there are a few other people who like the same things.’’

Take a peek into the design superstar's 1789 Cape Cod home.
Your comment is subject to the rules of our Posting Policy
This comment may appear on your public profile. Public Profile FAQ