The Latest on Alcohol Intake: Just in Time for the Holidays

With holiday parties upon us, I thought these two studies were interesting this festive time of the year when there tends to be an abundance of alcohol flowing.
The first study published in Alcoholism: Clinical & Experimental Research looked at the trend among some young adults called “predrinking “ or “frontloading.”  This is the practice of consuming alcohol before heading out for an evening of socializing.  For some, the rationale for doing this is to save money.  Let’s face it, wine, beer, and liquor are cheaper when you buy it by the bottle rather than paying a premium price per glass at nightclubs, bars, and sporting events.  At first glance, you may think that this practice would reduce the overall amount of alcohol consumed in a night.   Since money is tight among those who "predrink," they can't afford to drink a lot when socializing outside the home.  However, the answer may surprise you.
In a study over 180 young adults (average age of 23), researchers tracked their weekend (Thursday through Saturday) consumption of alcohol.  Those who drank before leaving the house consumed an average of about 7 drinks nightly compared to about only 4 drinks for those who didn’t drink before going out.  In essence, predrinking lead to overdrinking when you couple it with socializing outside the home.  Not surprisingly, those who over-drank also reported adverse outcomes from their binging such as hangovers, blackouts, and increased violence.
Another study suggests that American adults, on average, are consuming almost 100 calories a day (about 4 ounces of wine) from alcohol.  (A standard drink is considered 5 ounces of wine, 12 ounces of beer, and 1.5 ounces of hard liquor.)  At the extreme, almost 20 percent of American men and 6 percent of women consume more than 300 calories daily from booze.  That’s more calories than some people eat at breakfast.
While a four-ounce serving of wine may not seem like a lot of calories, keep in mind that many wine goblets that are being used nowadays hold 8 ounces or more of wine, escalating the calories per glass: 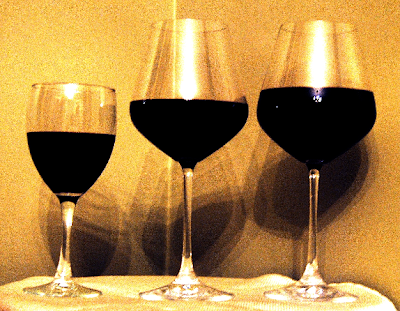 8 oz=100 calories    16oz-=200 calories    12 oz = 250 calories
Based on these studies, these tips may help you minimize your alcohol and calorie consumption during this festive time of the year:
For more tips on surviving the holidays, click here.
Follow Joan on Twitter at:  joansalgeblake