Nothing could be worse then when you think that you are making a healthy food choice only to uncover that it really isn’t healthy.  In other words, your healthy food choice backfires.   The latest “good news” from a study conducted by the USDA Economic Research Service (ERS) about the decreased levels of trans fats in food products can feed into this potential backfiring.

Trans fat has been shown to not only increase the bad “LDL” cholesterol in the blood, but it also can decrease the good “HDL” cholesterol, which is a very heart-unhealthy combination.  Since 2006, the federal government has required that trans fat be listed on the Nutrition Facts panel on the food label to help consumers make an informed choice when shopping.   Not too surprisingly, many food manufacturers reformulated their products to remove the trans fat because of this food labeling policy.

Here’s where the backfiring comes into play.  Bakery products and desserts that claim to have "0 grams of trans fats" often times give consumers the false sense that these sweets and treats have become a healthier food choice.   Unfortunately, when you remove the trans fat from a donut sold in bakery, you end up with, well, a donut.   The donut didn’t miraculously get converted into an apple or another naturally healthy produce item once the trans fat has been removed.  It will still contain about 300 calories, 16 grams of fat, and 12 grams of sugar or the equivalent of 3 teaspoons of sugar.

Reformulated donuts are not the only "healthier" food that can backfire.   Please click here to view this video for foods such as Greek yogurt and granola, which can also backfire. 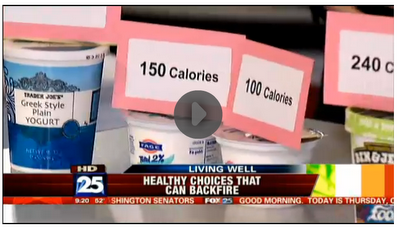