The Healthier Side of Fast Food

The latest from the researchers at the USDA is that Americans, on average, are consuming just shy of 200 calories more daily than we did in the late 1970's.  This isn't a big surprise as this coincides with the expanding presence of obesity among Americans.  According to the Centers for Disease Control and Prevention (CDC), approximately 35 percent of adults and 17 percent of America’s youth are considered obese.

While 69 percent of our daily calories are consumed at home from foods obtained at the supermarket, grocery stores, and other outlets, the remaining 31 percent are consumed outside the home, with the majority of them from fast food restaurants (see chart). 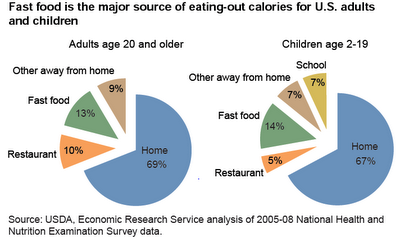 When the USDA researchers looked at the quality of the foods consumed outside the home, not surprisingly, these choices were lower in fruits, whole grains, fiber, iron, and calcium, yet higher in fat, saturated fat, and sodium.

The good news is that the new federal requirements for nutrition labeling at restaurants are slated to be released this fall.  These guidelines will require that restaurants with 20 or more locations (chain restaurants) must post the calories on their menus and menu boards.  According to the latest research from Mintel, over 30 percent of consumers would use nutrition information to make lower calorie and healthier choices if it was provided at the point of purchase.

Health and nutrition has already become a culinary theme within the restaurant industry according to Joy Dubost, PhD, RD, the director of Nutrition and Healthy Living for the National Restaurants Association.  “There has been a focus on providing healthier options at restaurants particularly since consumers are becoming more health conscience and demanding such options,” claims Dubost.  Consequently, many restaurants have already started posting the calories for their dining options.

Until the labeling law goes into effect, the following is a sample of some healthier fare being offered at local fast food and quick service restaurants to help you order with your health in mind. (Check their websites for other possibilities.)  These selections are based on the current Daily Values used on the Nutrition Fact Panel on the food label.  For a person consuming a 2,000 calorie diet daily, he/she should consume less than 65 grams of fat, 20 grams of saturated fat, and 2,400 milligrams of sodium per day.   These options can fit within these guidelines and also provide fruit, veggies, and when possible, whole grains:
﻿
﻿

Have you tried any of these healthier options?  What did you think?
Follow Joan on Twitter at:  joansalgeblake