May is National Barbecue Month (who knew?), and Memorial Day Weekend provides an extended opportunity to fire up the grill.

According to a survey conducted by the Hearth, Patio, and Barbecue Association (HPBA), over 60% of the households that own a smoker or grill will cook out on Memorial Day.   Another nationwide poll by the association found that more than a third of households are inclined to just “wing it” rather than follow a recipe when creating their carefree, outdoor dining masterpiece.

Carefree is one thing.  Careless and winging it when it comes to outdoor cooking can have you and your guests spending part of the holiday weekend indoors, close to a bathroom, due to foodborne illness.   If you are the grillmaster this weekend or have been lucky enough to be invited as a guest, read these eye-opening statistics and tips to help your holiday weekend be festive but safe:

Don’t Touch That!: While hand washing is a key strategy in reducing the risk of foodborne illness, unfortunately, men are less likely than women to wash their hands prior to handling food and after using the bathroom, according to a Harris Poll.   Another survey by the Academy of Nutrition and Dietetics (AND) showed that only 9 percent of individuals always or usually wash utensils before re-using them for cooked foods.

DO:  Keep moist disposable towelettes near the grill as a reminder to the grillmaster to clean his/her hands before touching the food.  Wash the platter and utensils that touched the raw meat before using them again on the cooked meat.

Don’t Rely on 20:20 Vision:  Let’s test your grilling eye.  Which of the burgers are done and ready to be served: 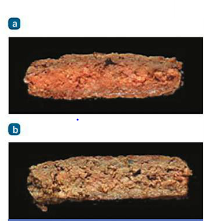 If you said “a”, you’re correct.   According to the USDA, 1 out of 4 hamburgers turn brown prematurely, that is, before they reach the safe, internal temperature of 160 degrees F in the center (burger “b”).  Also, depending on the pH, the amount of reddish pigment, and fat content  in the ground beef, the burger can look pink on the side yet have reached 160 degrees F making it safe to eat (burger “a”)
The only way to tell if the meat is done is to use a thermometer.  Unfortunately, only 23 percent of Americans use a food thermometer to check the doneness of their hamburgers, chicken breasts, and other grilled favorites according to the AND.
DO:  Use a thermometer and the following chart to determine when your grilled feast is done:
Don’t Let Leftovers Loaf Around:

While the party may linger, don’t let the leftovers do the same.   The rule of thumb is that food should not be left out at room temperature for more than 2 hours or 1 hour if it is 90 degrees F or above outside.

DO:  Wrap up leftovers immediately and give them the big chill in the refrigerator or freezer for another meal.

DO email these tips to your favorite grillmaster.