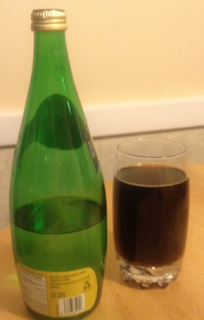 If you are having trouble zipping up your snug pants, it may not be entirely due to what you are eating, but rather, what you are drinking.  A study of more than 300 overweight  adults published in the American Journal of Clinical Nutrition uncovered that by simply replacing sugar-laden beverages with either diet beverages or water (regular or sparkling water) resulted in the individuals losing weight.

The participants in the study were encouraged to replace at least 200 calories (two 8-ounce servings) of a sweetened beverage with a non-calorie drink daily.  After six months, the researchers found a significant reduction of 2 to 2.5 percent of body weight, on average, among the diet beverage or water consumers compared to the control group.

To put this in perspective, for a person weighting in at 220 pounds (about the weight of the adults in this study), this percentage of body weight loss would translate into an approximate five pound loss.  Shedding five pounds in six months may just be enough to allow you to happily zip up those tight pants.

According to the USDA, added sugars provide a whopping 16 percent of the daily calories in the diets of Americans.  Not surprisingly, the number one source of added sugars in the diet is sweetened beverages including soda, sports drinks, and energy drinks.

Keep in mind, most sweetened beverage come in containers that are larger than eight ounces.  If you are drinking the entire container and several containers daily, you are gulping a fair amount of calories:

If you are concerned about your weight and are consuming sweetened beverages, replacing these beverages with the diet version or water may be an easy way to cut calories and drink your way to a thinner you.