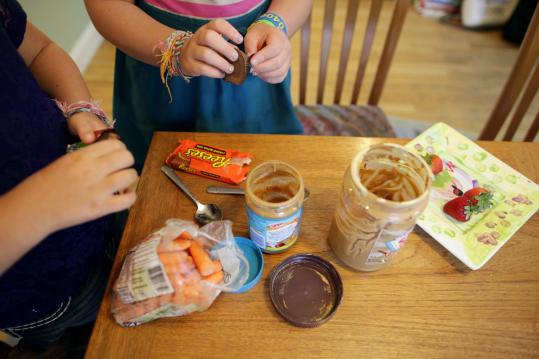 For years Shoshana Blumenfeld avoided eating carrots, peaches, and anything with nuts. A new test has revealed that she was misdiagnosed and that she actually is only allergic to birch pollen. Now she can eat almost anything she wants. (Tamir Kalifa for The Boston Globe)
By Deborah Kotz Globe Staff / September 3, 2012
Text size – +

After five years of living with food allergies, Shoshana Blumenfeld was adept at avoiding a variety of foods offered at play dates and school birthday parties, including legumes, carrots, apples, peaches, and anything with nuts. But the 11-year-old from Natick couldn’t contain her excitement when her allergist gave her some stunning news this past June: a relatively new blood test revealed that she wasn’t allergic to those foods after all but was instead allergic to birch pollen, which has similar allergy-triggering proteins.

“My sister used to sing about how much she loved peanut butter and it made me so sad not to have any,” Blumenfeld said. “Right after we heard from the doctor, I made my mom stop at the grocery store on the way home so I could get some. It was amazing.”

Food allergies in children have risen by nearly 20 percent over the past decade and now affect about 5 percent of all kids, according to the federal Centers for Disease Control and Prevention.

While overtesting and overdiagnosis may be contributing to the rise, researchers agree that environmental factors — such as certain pollutants or reduced exposure to germs — are probably also to blame. In addition to developing better tests, researchers have turned their attention to finding a way to reverse allergies to prevent some of the 9,500 hospitalizations and dozens of deaths that occur in children every year because of severe allergic reactions to food.

Food allergies occur when the immune system incorrectly identifies certain proteins in foods as harmful, triggering a cascade of reactions that lead to symptoms and, rarely, life-threatening anaphylactic shock.

In a small study published two months ago in the New England Journal of Medicine, 28 percent of children who were treated for their egg allergies by consuming increasing doses of egg protein under a physician’s supervision for nearly two years were able to overcome their allergy.

While it’s a promising start, “we’d like to get better results,” said study coauthor Dr. Wayne Shreffler, director of the food allergy center at Massachusetts General Hospital. More than two-thirds of the children weren’t cured. And 4 of the 40 children who were treated withdrew from the study after experiencing mild allergic reactions such as hives or itchy throat. None had severe reactions, but the study didn’t include anyone who had life-threatening allergic reactions to eggs in the past.

“We still have a lot of unanswered questions about the safety of this technique,” said study coauthor Dr. Marshall Plaut, an allergy research administrator at the National Institute of Allergy and Infectious Diseases. But researchers are pressing ahead, with federal funding, to study the technique for treating peanut allergies, which are more frequently associated with serious allergic reactions. Only 20 percent of children outgrow peanut allergies — compared with 80 percent who outgrow other food allergies.

Shreffler has several new trials underway to test variations on this technique — called desensitization — using both increasing doses of food and an experimental skin patch swabbed with peanut protein. The second method is needed in part because many children learn to hate the smell and taste of foods that trigger hives, throat itchiness, breathing difficulties, or vomiting, so getting them to eat these foods in studies has proven to be a challenge, Shreffler said.

Even as they search for a cure, allergy experts don’t completely understand how and why food allergies occur.

The latest research suggests that the American Academy of Pediatrics’ efforts to curb food allergies during the 1990s — by issuing a recommendation for parents to delay feeding babies with allergy-prone siblings allergenic foods such as nuts, eggs, and fish for the first few years of life — may have backfired badly, contributing to a greater number of children with allergies. In a 2008 study, British researchers found that Israeli babies whose early diet included a soft peanut-based snack were 10 times less likely to develop food allergies in elementary school than their counterparts raised in Britain who weren’t exposed to peanuts as babies.

“We no longer tell mothers to avoid initiating certain foods early on to prevent allergies,” said Dr. Scott Sicherer, past chair of the AAP’s section of allergy & immunology. The organization has also advised its pediatrician members to avoid over-testing for food allergies because all too often, the tests falsely indicate an allergy where none actually exists.

“About 9 percent of kids will test positive for peanut allergies if tested,” Sicherer said, but only 1 percent actually develop full-blown allergic reactions when they eat peanuts. “The tests that we have available today are excellent,” he added, “but they have to be ordered and interpreted appropriately.”

Children who develop hives after eating an almond cookie, for example, should be tested for nut allergies if they’ve never eaten nuts before, but shouldn’t be tested for a wheat allergy if they’ve already been eating bread without a problem.

To complicate matters even more, some kids develop itchiness in their mouths when they eat certain raw produce like carrots, peaches, and apples and will — like Blumenfeld — test positive for allergies to these foods when they’re primarily allergic to birch pollen. That’s because there are proteins in these raw foods (which break down when they’re cooked) that are similar to proteins in the pollen.

“We don’t think kids who have milder food allergies related to a protein in birch pollen are at risk of having a serious reaction, like anaphylactic shock, to these foods,” said Shreffler, who is Blumenfeld’s physician.

Some allergists have begun using newer tests — like those that look for reactions to birch pollen allergens — to distinguish between pollen allergies and true food allergies. Blumenfeld’s father, Josef, said the test wasn’t covered by his insurance but was the “best $300” he’d ever spent.

“To hear she wasn’t allergic to all these foods?” he added. “It was incredibly liberating.”

Newer blood tests that are more specific might be able to better predict who is more likely to have a life-threatening reaction to a food challenge — when children are given a small amount of a food to see if they develop a reaction — to determine whether they’re still allergic to a particular food. But most community allergists aren’t using the tests because they’re experimental.

John Kozelian of Belmont said his daughter’s first allergist felt uncomfortable administering a food challenge to see whether his daughter Olive was still allergic to milk because she had developed a mild rash when given a skin test. So two years ago, he took Olive to Massachusetts General Hospital where they were using the experimental blood tests.

“Based on that blood test, they felt comfortable about doing a food challenge,” Kozelian said. To 12-year-old Olive’s delight, she learned she’d outgrown her milk allergy; last year, she found out from a food challenge that she could also eat eggs.

“We were able to buy her a store-bought birthday cake with eggs and butter,” said Kozelian. “We’d given up thinking she would outgrow her allergies since that’s what we’d been told by her initial doctor.”

Food allergies in children have risen by

over the past decade and now affect

of all kids, according to the federal Centers for Disease